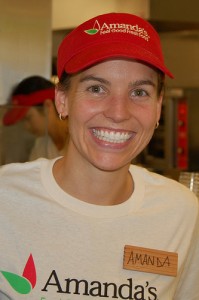 Fast food is the ultimate American invention — cheap meals for people on the go. But we’ve paid a heavy price for our national addiction — an epidemic of obesity, the destruction of our fragile environment, and the loss of community ties that are maintained by taking the time to prepare and eat food together.

Despite these negatives, the need for quick affordable food is undeniable in today’s world. But why on earth are McDonalds and its competitors our only option? Every single time I get hungry on the road, in an airport, or at a shopping mall I wish someone would open a healthy fast food restaurant… and it turns out the wait is finally over. Amanda’s Feel Good Fresh Food restaurant opened it’s doors for business in Berkeley at the end of July 2008.

The restaurant happens to be located right downstairs from my office so I was among the first to check it out (read my review here.) I’m pleased to report that Amanda’s is pretty much exactly what I’d been wishing for–the food is healthy (they have the nutrition guidelines to prove it, too), tasty, and affordable (a cheeseburger made with naturally raised beef and organic cheese is $4.50, baked sweet potato fries are $1.50, and a freshly made agave-sweetened soda is $1.75.)

Amanda’s also goes out of its way to reduce its impact on the environment. For example, they won’t sell bottled water since it creates too much landfill waste and takes a lot of petroleum to transport. Everything served in the restaurant is also fully compostable so any “trash” left over at the end of your meal can be deposited in one of the restaurant’s green bins that feed directly into Berkeley’s city composting program where it will become rich soil for local farms and city landscaping projects in a matter of months. The restaurant also tries to foster a sense of community with a series of events in the restaurant and around the neighborhood. The future of fast food has never looked so green nor so healthy!

Amanda is often behind the counter in the restaurant, filling orders alongside her team (the handwritten “Amanda” on her wooden name tag was the only thing that tipped me off.) I was curious to know more about how she’d gone about making her idea a reality and what her plans were for the future of the restaurant so I introduced myself. She was kind enough to meet with me and answer my questions late last week.

How did you come up with the idea for Amanda’s? What prompted it?

I’d wanted to someday run a business that had a social and environmental mission ever since college when I was inspired by a book I read by Tom Chapel, the founder of Tom’s of Maine. So I always had that in the back of my mind. I went into technology when I graduated from college because that’s where there was great opportunity to learn business — I figured I needed to learn about business first and then I could figure out how to bring in the social mission.

I went back to business school because I wanted to focus on businesses with a social mission. Stanford has a really great social responsibility/public management program. At first, I actually thought I wanted to work at Trader Joe’s because I love their products – a lot of them are organic and natural and they’re affordable. They also treat their employees well – it’s just a cool culture. But when I learned more about it, I found that it wasn’t very entrepreneurial and after being in the technology industry, I realized I had grown used to that. So I thought I would intern for a smaller company whose products I was really excited about. I ended up interning for Niman Ranch which is a natural meats company that was located in Oakland. And that was the summer that the movie Supersize Me came out and I also read Eric Schlosser’s book, Fast Food Nation.

The summer I was at Niman Ranch, I did operations and marketing projects and got to do some ride-alongs on their delivery trucks. We came up to Berkeley and went to Chez Panisse and Whole Foods and some other really nice grocery stores and I realized that that quality of food was not reaching many people, and definitely not reaching the people Schlosser writes about in Fast Food Nation. So that’s when I started thinking about this need. Then I spent my second year of business school focusing on building a business plan for the restaurant, researching the market, and talking to everyone in the restaurant industry. When I graduated from business school, I decided to actually start implementing the plan. 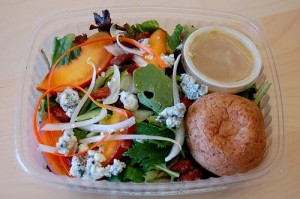 Once you’d had the idea for the restaurant, what was the path to making it a reality?

I think almost everyone who saw the movie Supersize Me had the same idea – that was the clear reaction. But the restaurant industry is really challenging and a lot of people who had the same idea probably didn’t pursue it because it’s so tough – there’s a lot of competition and profit margins are slim — that’s what I found out after studying it more in business school. But I also knew that I had the passion to do it anyway.

There are just hundreds of people who’ve helped build this. The restaurant has my name on it but it’s definitely a community effort. In business school there were probably half a dozen classmates of mine and also people in other graduate programs helped put the business plan together. It was very well-researched which I think gave me confidence in it as well as giving a lot of other quality people the confidence to invest in the business both financially and with their time as advisers or as the consultants that helped design the menu and helped design the space.

Since I work right upstairs I walk past Amanda’s all the time and I also eat there often. It seems to be a melting pot of sorts. I see a pretty diverse mix of customers — Berkeley high students (who tend to frequent the non-healthy fast food joints in the neighborhood), UC students, local professionals, young parents, hippies, security guards, and other people who look like they’d be equally at home in the McDonalds up the street. Would you say that is an accurate description of your clientele? And is that what you expected?

It’s what I hoped! It’s interesting because we thought that women would be our core customer (and I think they still are though I haven’t spent enough time analyzing our customer base and actually counting customers) because women tend to care more about their health and make a lot of the restaurant decisions for their families and co-workers but it has been even more diverse than I expected. That’s one of the things I like about being in Berkeley–we’re not only bringing healthy food to people who already eat healthfully, there are also so many different people here that we can start actually making a change in the way some people are eating.

Have you considered listing where you source your different ingredients from on your menu or your web site?

It’s a balance, we try to talk about it on our web site but also not everyone wants to know. I’d rather source things locally (and it’s cheaper to do that!) but you can’t get organic tomatoes locally all year round or local organic apples so sometimes they have to come from New Zealand because we offer our apple fries all year long. It’s interesting — everyone is so enamored of Niman ranch. If you say you buy your beef from Niman Ranch, people automatically assume that it was raised up in Marin County but in reality their meats come from ranches all around the country. We source our meat with a local family-owned distributor that sources its meats similarly to the way Niman Ranch does. So if people ask, we tell them our beef is from the Midwest and raised all-naturally. The veggies are as local as we can get them – they’re sourced through a local produce company.

Well, one thing that I didn’t talk about is that everything we do, all the decisions we make in the restaurant are based on our goal of creating a healthy community. For example, when we’re deciding whether to buy local or to buy organic, that is what we use as our decision-making metric. This goal of a healthy community is something that we’re trying to foster with our own customers and with our employees – we got all our staff trial memberships to the YMCA and Funky Door Yoga to encourage them to exercise. And they’re really inspiring – most of them find more time to exercise than I do! Our team really makes us what we are – we’d be nowhere without them.