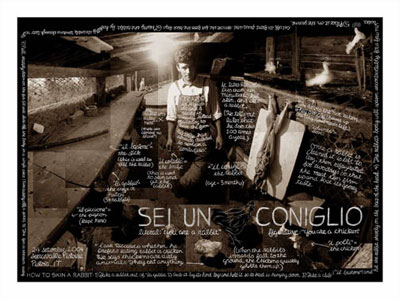 A photograph that hung on a wall near my desk in the Slow Food Nation office has been an inspiration, an adventure, a disappointment and perhaps now a call to action for me. It was a print of a work called Sei un Coniglio (Italian for “You are a rabbit”) by the artist and goats’ milk ice cream-maker Douglas Gayeton, an American who lived in Tuscany for many years. Sei un Coniglio shows a young farmer standing casually next to a rabbit he has just skinned and hung up by its feet. In the photograph, Gayeton has written over his overalls, “Riccardo is 19 years old and a rarity in Tuscany. Instead of wanting to leave the farm, Riccardo has already decided to remain a ‘contadino’ (peasant).”

The photograph is strikingly beautiful, and Riccardo’s decision is remarkable, but what turns my gut is how much he and I resemble each other. Riccardo is my Tuscan, rabbit-skinning doppelganger. All last year, I sat at my desk and thought of his picture on the wall behind me, watching me type emails, while he worked on his family’s farm in Tuscany raising and slaughtering rabbits and boldly embracing the labor of his ancestors. I came to think our resemblance was a cosmic sign. The phrase “Sei un coniglio” is the Italian way of saying, “You’re a chicken.” Riccardo was resisting a culture that told him to leave the farm, go to the city and find a real job. Instead, he was making a living out of creating, nourishing and ending life. “Am I a coniglio?” I asked his picture.

When I learned that I would be in Italy for Terra Madre 2008, I scheduled in a few extra days to find Riccardo and ask the question in person. Douglas Gayeton put me in touch with his friend Pier Giorgio Provenzano, who had been at the photo shoot and knew the general vicinity of Riccardo’s farm. When Terra Madre finished, my girlfriend Vera and I took a train down to Pistoia, a small city 30 minutes outside of Florence. Pier Giorgio met us at the station and brought us back to his apartment for a good night’s rest. First thing the next morning, we squeezed into his tiny Italian car and went looking for Riccardo’s farm in the hills above the city.

Within ten minutes, we’d found it. Riccardo’s father greeted us at the door of his house with a smile and invited us in without a question. Riccardo was away for the morning at a business meeting, he told us, but it was a blessing we had come and we should stop by the local olive press that evening: he and Riccardo would be there pressing the year’s harvest. He didn’t seem at all perturbed that a kid from California had traveled halfway around the world to meet his son. I assumed this happened often.

That evening, we squeezed back into Pier Giorgio’s car and drove to the local olive press, where I met Riccardo. He was standing next to a row of big tubs filled with olives and chatting with a few other, much older farmers. His father had told him we were coming, and he was a little embarrassed about it, but so was I, so we both blushed and shook hands. He was wearing an Italian auto-racing jersey; not overalls, like in the picture. He’d cut his hair shorter and gained a little weight. He and I didn’t resemble each other at all, actually, other than in age: we were born the same year.

He didn’t skin rabbits any longer, either. He told me he gave it up two years ago: the time it took wasn’t worth the money. These days, he focuses on olive oil and on expanding his business: in the meeting that morning, he had been discussing a contract to export his oil to specialty shops in Japan. My girlfriend, who teaches gardening at The Edible Schoolyard, asked whether he has problems with fruit flies attacking his trees. No, he said, because he sprays his trees with a “medicine” that keeps the flies away but also keeps him out of his fields for thirty days while the pesticide clears. He didn’t go into more detail, as all of a sudden it was his turn at the olive “press” and his olives had to be fork-lifted into a roaring metal machine.

Before coming to Italy, I had thought a lot about what Riccardo might tell me when I found him, but I hadn’t considered, even once, that he might have given up skinning rabbits. He was supposed to be my sage at the top of the mountain. I had climbed to his perch to find that he’d left for a shorter mountain with an easier climb and a better view. Did this mean I wasn’t meant to farm rabbits? That I shouldn’t try to bring his ancestral wisdom to the U.S., country that had crushed such thinking long ago, a country where leaving an office to go farm is clearly irrational but maybe a little revolutionary?

I don’t know. A few months later, I haven’t decided. I do know that I don’t fault Riccardo at all. I admire him: in his part of Tuscany, he’s the only farmer’s son who’s committed to keeping his family’s land in production. There isn’t a market for locally raised rabbits, so he’s building his business around a product that does well now and will do well in the future. He doesn’t seem to glorify the lifestyle of his grandparents and the food traditions that will be buried with them. He’s sensical.

I’m not. At the olive press, Riccardo’s father invited us all to have dinner with his family at their farm the next evening. Long ago, Riccardo’s grandfather had built a wood-fired oven into the side of their farmhouse, and they still liked to bake pizza in it. That evening was magical. Riccardo and his parents rolled out balls of dough, slathered them in fresh oil and a sprinkling of herbs and slid them into an oven fiery-hot with coals from the wood of his olive trees. Riccardo’s grandmother set a table in the kitchen with plates of prosciutto she had made from the hams of a pig they raised two years ago and with a few bottles of the slightly fizzy red wine the family had made with that year’s grape harvest. Riccardo sat at one end of the table, silent, a little sullen, sipping Coca-Cola and writing text messages to his friends; his father sat at the other end, jovial, laughing, filling our glasses with his wine and narrating the family’s history. Vera and I got along much better with the father. A few days later, I left Italy a little unsure about my future skinning rabbits but certain about my mission to keep the values of ancestors like Riccardo’s alive.