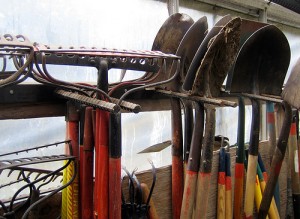 Shovel-Ready is quickly becoming one of the darling terms of 2009 as it becomes a proxy for projects that will quickly create jobs and economic growth. Most of the Shovel-Ready projects that are being discussed are massive in scale, and many of them will still take months to start after being given the green light.

Recently, Oakland based Van Jones, president of Green For All, testified before congress in support of a variety of green jobs, including the fields of construction, renewable power, green transportation, and manufacturing.

Conspicuously absent from his presentation before congress was any discussion of food. There is a reference to Biofuels, but no discussion about food being one of the primary areas through which we could create change.

I am not criticizing the suggestions that Van Jones is making. Indeed, if his proposals are adopted in full it will signal a significant shift in the landscape of green technology, energy, and manufacturing in this country. But I am suggesting that we take these proposals one step further.

What we are all looking for with this stimulus plan, after all, is a plan that will quickly create jobs all across the country while at the same time protecting and improving the health of the people involved and the environment in which they live. The typical Shovel-Ready project that is being suggested might do one or two of those, like the repair and reconstruction of our failing transportation infrastructure.

The question is, can we create a project that does all of these things? Yes We Can. The solution is Agriculture Supported Communities.

We are all familiar with the CSA, or Community Supported Agriculture – farms that look to the urban and suburban districts to buy shares of their produce, a portion of which is often delivered each week directly to people’s homes or other central pickup location. This has been an amazingly successful model, to the point where many established CSA’s have a long waiting list of potential customers.

Agriculture Supported Communities (ASC’s) turns this model around. It places the agriculture (in potentially in the form of small backyard and community gardens) in the community, and creates a business model within which local people and businesses could benefit. One possibility would be that some people could be directly employed by the stimulus programs to run these gardens, while other people could buy shares of the produce with their labor and donation of land. The remaining vegetables could be sold to local businesses bringing money back into the program.

There are many forms that this could take, but the bottom line is that they wouldn’t be in direct competition with the current, large-scale agricultural system we currently have – they would serve communities and areas that are poorly served by our present model.

Secondary benefits of a project like this are many, including getting people outside and connected with the land and food they use to nourish their bodies. The health implications of such a program should not be underestimated, as well, as people would increasingly eat the whole foods they had a hand in growing.

So, let’s open up our hearts and minds to this greater possibility, one in which the new green economy is driven by clean cars and wind energy, by also by the produce grown in our own communities. Now that’s Shovel-Ready.
Photo: you can count on me