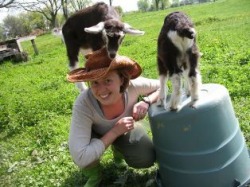 The thought of finding a farm apprenticeship makes me a little nauseous, but I remember how exciting it once was. I remember a tangle of possibilities, an array of types of farms, sizes of farms, types of folks to work for, places to live – it was all a bit overwhelming. Having found and finished my first apprenticeships, I can now share a few lessons for young farmers-to-be beginning the search.

When it comes down to it, you’re going to have to decide whether finding the perfect farm or being in a certain place is more important to you. This may sound obvious, but searching through postings and sending out feeler emails to the entire country (or world, for that matter) while you whittle down your priorities is exhausting.

I’ve completed a summer internship and a season-long apprenticeship. My summer internship was a blessing in disguise. It was my junior year of college, and I wasn’t quite sure what I wanted to do with this “pivotal” summer. (I’m pretty sure my advisor didn’t have farming in mind when he spoke to me about the potential impact of the summer before my last year of school.) Anyhow, I decided to stay local and grabbed a resource list created by a local nutrition graduate school and began looking through their database of past internships. I would suggest this starting point to anyone who lives within shouting range of an agricultural, nutrition, or even public health school. They tend to have done their networking homework, and often, even if there’s no electronic database of opportunities, there will be someone who can give you some names over the phone.

After sending out close to 30 feeler emails to test the waters, I got only a handful in return. One of them happened to be Waltham Fields Community Farm, a 9-acre CSA and hunger relief-farm not far from Boston, located a short 15-minute drive from my spanking new apartment near campus. Perfect. I went out to interview early (and I mean early, as in October of the fall before I wanted to start), got my foot in the door, and next June, there I was.

The internship at Waltham was great. I was working closely with a staff of seven: a farm manager, an assistant manager and volunteer coordinator, two seasonal growers and three other interns. The range of experiences on the farm helped me feel at ease right away, and within weeks, I had fallen hard for one of the seasonal growers (that’s an added perk of farming: many, if not most, of the farmers I know met their other halves on farms). I was involved in every aspect of the farm: seeding in the greenhouse, hoeing endless rows, transplanting, mulching, twining tomatoes, harvesting, washing, packing, CSA distribution. You name it, I was there. I worked 35-hours a week, enough to prove to me how exhausting farming was, but not so much that I burnt out right away (the seasonal growers worked more like 65 hours a week, and I’m still not sure how they do it). I came out of the summer in love with farming – and very much in love with my farmer – and continued to volunteer at Waltham on weekends during my fall semester.

I ended up finishing school a semester early and knew I wanted to jump at the opportunity to farm for a full season. My farmer-boyfriend and I had decided to move together to Amherst, Massachusetts, where he had found a job as an assistant manager. With a geographical area to focus on, I carpet bombed all the farms in the area with inquiries: would they be hiring for next season? If so, what were they looking for? Were they close enough to bike? And if not, were they on a bus route?

I settled on a brand new 3.5 acre farm run by a young and funky couple about 6 miles from my apartment in Amherst. They raised veggies for a CSA and planned to open a farmers’ market later in the season. They kept goats for milk and had orders for chickens – both broilers and laying hens – in the mail.

Part of what was so important to me about choosing an apprenticeship was that I knew I wanted to work part-time. As much I love farming, I know it’s not something I have the stamina to do for 80 hours a week. Some people do, and that’s great. But recognizing your own style and limitations is incredibly important. Not everyone is cut out to stay until the sun goes down and then harvest by headlamp. And not everyone can wake up at 4:30 a.m. to bike 6 miles to work every day all summer long. Some can – my boyfriend being one of those crazy loons– and some people even love it. But for me to continue to take joy from farming, I needed more balance. I was upfront with my new bosses from the first phone call. So, tip number two to young apprentices: be honest with yourself and your farmers. If you’re not cut out for a full go of it, tell them. Most farms need most of their help weeding, harvesting, or marketing, and will consider hiring part-time. Some people want to really dive in. If that’s the case, be vocal about it! You’ll be a catch for farmers in need of extra (wo)manpower.

My season as an apprentice taught me a tremendous amount about a farm’s first year in commercial operation, from wretched rains in July and August to the joy of watching our new CSA members beam at the first heirloom tomatoes and rotund Italian eggplants. The ups and downs, the stresses and joys, are all very much a part of farming, and watching my bosses pour their energy into the farm’s first year was nothing short of inspirational. As their moods and energy levels fluctuated, so did mine. Some nights I returned home energized and triumphant; others nights, broken down and exhausted. And when the mercury hit 99, I was ready to quit. But I stayed on until the very last harvest, which gave me a feeling of accomplishment like no other. Plus, fall is a glorious time to be on a farm.

I could ramble on for hours about farm internships and apprenticeships. Start early and take your time when you’re looking. You don’t want to be stuck scrambling and then end up in the wrong place. Farming is intensely personal, and meeting your bosses, and even working with them for a day or two before you sign on, is the best way to go about things. If you’re living far away and can’t do that, just make sure you talk enough with them over the phone and email that you have a real sense of who they are and what they’re looking for. Are they high anxiety? Efficiency-minded? Head-in-the-clouds farmers who sing as they move slowly down the rows? Remember, you’re going to be spending a LOT of time with these folks, so getting along is important. It’s also important to consider whether you want to live on the farm. Some people swear by it. I, on the other hand, needed to be able to go home to my own space at night, to have a break. Farming can become very insular, and although a crew can bond intensely by living together, it can also become like “Real World” if sparks begin to fly or someone pushes the wrong button on someone else. So consider your living style and needs before jumping in.

As far as where to look, Local Harvest, ATTRA, The Rodale Institute’s New Farm, Orion Magazine, and even Idealist have been my steadiest listers. There are also regional sites, depending on where you live (in the Northeast, for example, NOFA is a great resource). Try word of mouth, too: talk to other farmers you know at your local farmers’ market or CSA. Where have they worked? Do they like it? Can you work where they are now next season?

Most importantly, make sure you’re prepared for the physical challenge. Make sure you’re okay with dropping to sleep as soon as you get home. Most farmers I know don’t make it past sunset during the long summer days. Oh yeah, and GET IN SHAPE! I can’t say that enough. Try to mimic farm tasks as best you can. Strengthen your back, your biceps, and your quads. Run. Squat. Lift. Stretch. Farming can be painfully discouraging if you’re so sore after your first week that you can hardly get out of bed, let alone think about toting 50 lb. crates of cabbage. Not everyone is cut out to farm. Some people need to work on a garden scale, and that’s okay. It’s less physically demanding, and the scope of the work is less overwhelming. Be honest with yourself. But if you think you’re up for the challenge, go forth, young farmer, and dig in.

This post is part of Gordon Jenkins’s Young Farmers Unite series, where he writes and invites others to write on the challenges young farmers face, and how we can support new farmers at their profession.