Change the Food Agenda, by Eating Dinner at OPEN 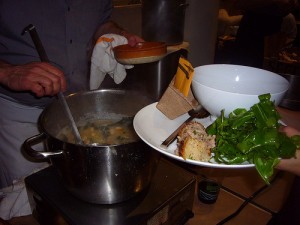 OPENrestaurant, an ongoing series of conceptual art/dinners put on by Chez Panisse employees Jerome Waag, Stacie Pierce, and Sam White, had its third installment at the Yerba Buena Center for the Arts on January 6. The happening, which melds performance and dinner party, inadvertently weighed in on an argument that’s been circulating in food politics circles for a while.

Its founders’ and ingredients’ provenances (for the food, San Francisco, Oakland, and Berkeley city limits), and the solid attendance of Chez Panisse cooks and waiters, made a justifiable claim: whatever you think about the grande dame restaurant’s role in today’s food movement, you’ve got to admit she’s still pretty fertile.

In its first decades, Chez Panisse, famous for bringing agriculture back to the American table, produced a new generation of conscientious cooks, who went on to open their own sustainability-focused restaurants, helping to reignite interest in local, seasonal, organic food in the process. But in the last few years, as farm names and vegetable varietals have become the norm on Bay Area menus, food activists have questioned Chez Panisse’s relevance.

While you can’t chalk their whole project up to their employer, with OPENrestaurant, Waag, Pierce, and White are leveraging what they’ve learned at work to change how we think about sustainable food. The project, whose tagline is “seed the sensible…harvest the impossible,” is geared toward shifting Bay Area food conversation away from the now familiar, if valuable, rural farm-to-table connection and toward the gritty question of how the other fifty percent (who live in urban neighborhoods) can eat well.

The events, which comprise a series of meta-transparent dinners—attendees of the whole series have seen photographs of their dinner’s birth as a piglet, its slaughter, and its transformation into food—are quite beautiful and absurd, and serious without being earnest, a rare combination in the sustainable-food world.

Each of the exhibition/restaurant’s editions has had a different focus—the March debut, OPENsoil, encouraging conversation about food’s beginnings by including soil on its menu, the September follow-up, OPENcity, looking at the city as a farm by buying (and gleaning) all its ingredients from urban farms and municipal fruit trees, and the January event, OPENrestaurant at Yerba Buena Center, using the gallery format to turn urban-agriculture activists into the dinner’s centerpiece. 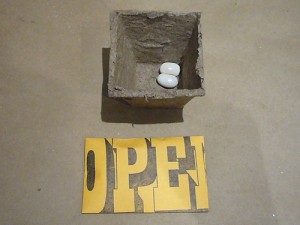 OPENrestaurant at YBC was in some ways the most ambitious of the series (even accounting for a pig-butchery demonstration at MoMA they did in between the second and third dinners.) Along with eleven other urban food-project heads, I was asked to sit on a “panel” for dinner at a compost-table at the center of the room. Our only job was to talk to each other, and attending guests, about how to make the urban landscape more productive for food.

To help frame the night, Waag drew three long, black banners which he hung from a mezzanine above the gallery (in the end they were too high to read, but they were lovely). The banners said, in sequence: “seed the sensible;” under which were listed generative urban sites, like “pothole,” “sidewalk,” “menu;” where you could see the ingredients of the night’s dinner, “kale,” “cannelini beans,” sunflower,” and “harvest the impossible,” which listed traditional agricultural spaces, like “field,” and “patch.”

Our conversation, which was productive on its own, with two urban foragers, an eat-in activist, and a food writer talking about how to organize around subsidies for people who create green spaces, and project collaborations planned, didn’t inform the event itself. OPENrestaurant’s rejection of restaurant formalities means that attendees’ attentions are not directed, specifically, to anything. As Waag told me, that is the idea. “It is Chez Panisse turned loose.”

The organizers are true to their evolving mission. Pierce collected the meal’s salt at Ocean Beach, in San Francisco, wading in, in jeans, with a five-gallon bucket and then drying it on her Bernal Heights deck. The long-lasting pig’s snout and tail sat akimbo in a bowl next to the coat check. Guests were given compostable seed-starting containers and packets of kale, cannelini, and sunflower seeds, as well as directions to scoop compost from the center table; then they were told to go home and plant their dinners.