A Look at How We Eat Now: America Eats! by Pat Willard | Civil Eats

A Look at How We Eat Now: America Eats! by Pat Willard 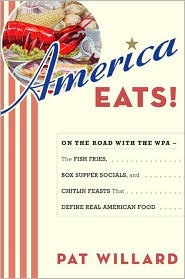 Like one of the BBQ meals described in its pages, America Eats! by Pat Willard is tasty and completely satisfying.  It’s a timely book, too: not only because of the material’s origin as a New Deal project (which the nation’s current economic situation has all of us thinking and talking about), but because of the growing interest in American food culture and sustainable food systems.

This book really represents two writing projects: It incorporates extensive pieces of regional manuscripts produced during 1930s by the Works Progress Administration with contemporary observations by Willard, who attempted to follow the footsteps of the original WPA authors to discover what remained of the food culture they described, or what corresponded in contemporary experience.

As such, the text weaves back and forth, past and present, an unknown WPA writer, then Willard’s contemporary account.  Pay close attention: you won’t want to miss a bite…er, word.  One minute I was reading a report from the WPA’s Oregon Office about wild hogs in cane-break, circa the Great Depression.  A paragraph later I was learning about modern residents of Oregon, the Erickson family, (who live south of Portland) and their wild fallow deer herd.

The original WPA America Eats! project was produced by unemployed writers during the Great Depression.  The goal was not to collect recipes, per se, but to understand food and eating as part of American social and cultural life, and to document the development of local cuisine and customs.  (There are some recipes in the book, but not all are precise and usable).

The stories written by WPA writers were slices of life: local events where food was served.  These included – but weren’t limited to – political, church and community events; religious revivals; teas; fairs; family reunions; rodeos; harvest festivals; national holidays; and memorials.  Likely due to their prevalence during the Depression, the food and cultural life of hobo encampments was even included on the list. WPA writers were generally unknown, but many became famous (including Eudora Welty, Ralph Ellison and Saul Bellow).

The original WPA project was incredibly ambitious, and was divided into five geographical regions.  Willard has provided a truly great service by producing this book, because the original America Eats! was never published.  With WWII looming, the program was eventually discontinued.  While the Library of Congress has some of the holdings, others are spread throughout the United States, and some of the original materials have been destroyed or lost altogether.  Willard’s work in highlighting the original project has brought to the fore important observations about American food culture that should inform our lives – and public policy – today.

This book celebrates American cuisine, and the diverse cultural and geographical elements that influenced it.  Willard argues that while America is a young cuisine in contrast to that of other nations, it suffers from no “poverty” of heritage. The accounts of social life (past and present), and the food presented at these occasions, clearly demonstrate that American cuisine developed – and continues to develop – as a result of what Willard terms “unprecedentedly varied cultural influences,” among other factors, including necessity and “contrasting agendas.” 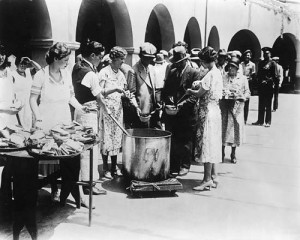 You can read the first chapter of Willard’s book, free of charge, on Amazon.  (America Eats! was one of Amazon’s July picks). But you’ll want to buy the book or check it out of the library, because the rest of it is what I regard as required reading.  In particular, the last chapter is one every American interested in sustainable food systems and American food culture, including our federal policy makers, should read.

In it, Willard discusses the role of food in creating community, and how important regional cuisines and what she describes as “plain cooking” are to us.  Willard makes a strong argument that it’s not the taste of our food, but how we use it, which has been central to the development of our nation’s cuisine, and perhaps, our community life.  She also argues that we accept variations in our cuisine with more grace than others.  We’re willing to do it our way, and let others do it their way, too, when it comes to food.  Food has been an important point of assimilation in American life, and Willard describes the merging of immigrant and regional dishes in a way that should make anthropologists and sociologists take notice.

We each have our own food allegiances.  I was born in Pennsylvania to expatriate Southerners.  (And like Willard, while I can’t intellectually rationalize the ingredients of Pennsylvania Dutch scrapple, the mere thought of fried scrapple makes my mouth water).  The gatherings of my Southern relatives nearly always included gumbos (chicken and shrimp), ham, cornbread, grits casserole, Ambrosia salad, my grandmother’s Million Dollar fudge, trays of pralines, lemon meringue pie, and Jezebel jelly.  Oh, and bottles of Coca Cola pulled (at great risk) from the rusty old pop machine my great-grandfather kept in the barn behind his house.  I don’t eat most of these foods now (except corn bread, which we eat at least once a week).  But the memories of this food, a yard full of exotic relatives (none of whom I see any more), are some of the clearest, purest memories of my childhood.  We each have food memories like this.  Food shapes us, not only physically, but culturally.

We are beginning a new chapter in our national life, one that will feature some hard times and some hard choices.  We’ll be looking back to our past for clues, and Willard’s book provides some important ones.  These harder times, these changing times, conversely, will also provide more opportunities to strengthen our communities.  Despite the Great Depression, WPA writers found strong communities.  Willard found them, too.  Food will, and should, play a central role in this new period in American life.

Rose Hayden-Smith serves as strategic initiative leader in Sustainable Food Systems for the University of California’s Agriculture and Natural Resources division.  She also serves as a 4-H youth, family and community development advisor for UC’s Cooperative Extension office in Ventura County. Her work focuses on providing gardening and food-systems education to youth, educators and community audiences. Hayden-Smith uses historical examples to influence current public policies relating to food systems and nutrition. She holds Master’s degrees in education and U.S. history, and a Ph.D. in U.S. history and public historical studies from the University of California, Santa Barbara. A practicing U.S. historian, she is a nationally recognized expert on Victory Gardens, wartime food policies, and school garden programs. A Kellogg Foundation/Institute for Agriculture and Trade Policy Food and Society Policy Fellow (FASP), she is the creator of UC’s Victory Grower website and blog. Read more >