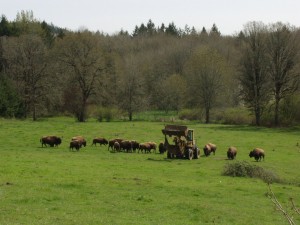 We need another and a wiser and perhaps a more mystical concept of animals…. They are not underlings; they are other nations, caught with ourselves in the net of life and time, fellow prisoners of the splendour and travail of the earth.

It can be easy to forget that food comes from somewhere. Those of us who eat animals tend to like it that way. For that reason, for most of my life, I’ve done my hunting in the deli case, training my shopping cart on plastic-wrapped livestock at rest in a Styrofoam pasture.

On a few occasions, though, I’ve seen my dinner alive before I’ve eaten it. On a road trip after college, my friend Ian and I snuck behind a poultry warehouse in Ohio, where culled chickens had been smashed against the pavement. We ate our egg sandwiches reluctantly. Another time, a confinement hog farmer in Indiana invited us in for pork chops, while our noses still burned from the stench of manure sloshing in the pit below the animals.

I’ve had good experiences, too––fresh milk drawn under Amish lantern-light, grass-ranging lamb roasted whole at sheepdog trials, the deer we hunted one fall in Iowa. Even when I didn’t like what I saw, there was something cathartic about those moments when I knew what I was eating. Connecting the dots between muscle and meat made me feel, in a way I hadn’t before, honest.

So this spring, when a friend called with an offer to join in a buffalo slaughter, I accepted, and left the house early on an April Saturday to meet him. We drove through urban Portland and the suburbs, just to the edge of the countryside. On the hill ahead of us was a freshly hatched clutch of McMansions, but in the foreground there was pasture––and buffalo. The animals, weighing more than a thousand pounds apiece, grazed placidly, majestically, almost prehistorically. Raised on good pasture, they spend their lives free from confinement, stress or pain, until––one at a time and in comfortable environs––they are harvested.

We clamored onto fence posts in time to see the rancher single out a mature animal and shoot. I felt the ache of witnessing death, then realized I wasn’t alone in my sadness. As the rancher knelt over the buffalo and hoisted it by chains with the bucket of a loader, the rest of the herd drew in close and lowered their heads. The loader lumbered across the field, and the herd lined up in a single-file procession to usher its dead to the pasture’s edge. The sight of animals mourning––in whatever way those silent creatures did––humbled me to my carnivorous core.

So this year I’ve decided to make one resolution, and it’s one I intend to keep for life. Having seen animals like that buffalo live and die with dignity, and having seen and (as a consumer) supported the opposite, I will not eat confinement-raised meat again.

It’s a commitment that I expect will be easy to keep at home: I already do as much shopping as I can at the farmer’s market. There, I get a handshake promise from the animal’s caretaker that the creature I’m eating touched grass, felt the sun, ate a diet free of hormones and additives, and was slaughtered with dignity.

Supermarket shopping is a little harder: chicken labeled “Free Range” may never have been outside, and beef termed “Organic” may have been fed a diet heavy in corn it wasn’t meant to digest. Doing the detective work to find out where my meat, eggs, and milk are coming from will be a challenge, but a fun one. I’ve got a cell phone, and every carton in the store has a toll-free number so I can ask what kind of farm my food is coming from.

Eating out promises to be harder, especially on the road. In college towns and fancy restaurants, food is given extra value when it can be traced to a family farm and advertised as such. But in most places, pork is pork, regardless of how the pig––an animal with clean habits and intelligence on par with a dog––lived and died. I don’t want to be elitist, but I don’t think asking for fundamental respect for the animals I’m eating is pretentious––it seems merely humane. So if I’m in a restaurant that’s making an effort––advertising its “natural” meat and “cage-free” eggs, I’ll have some (and probably order seconds if they’re from an extra good source). If the menu doesn’t advertise where the meat is coming from, I’ll ask. And if quality protein isn’t on offer, I’ll have the oatmeal, and leave a little business card behind: 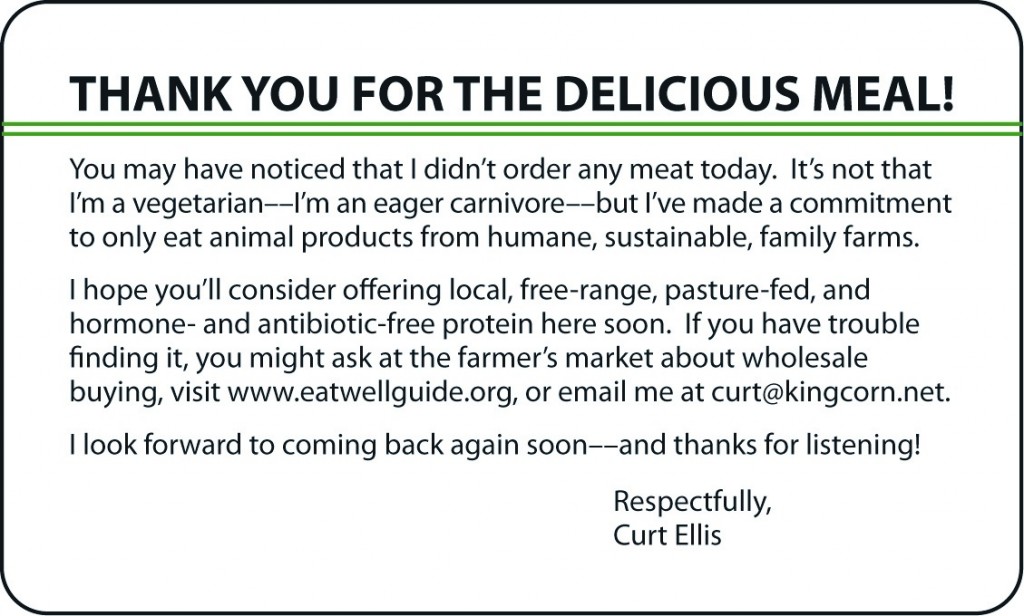 For good and bad, farmers, slaughterhouses, restaurants, and supermarkets make many of their decisions about animal livelihood based on what the market demands. If we, the consumer market, decide that 2009 is going to be another year of eating whatever’s cheap, abundant and easy, the outlook for the animals caught in our industrial net is sad. There is another option, but we have to decide that compassionate and carnivorous can go together.