Stevia: From Banned Herb to the Holy Grail of Sweeteners | Civil Eats

Stevia: From Banned Herb to the Holy Grail of Sweeteners 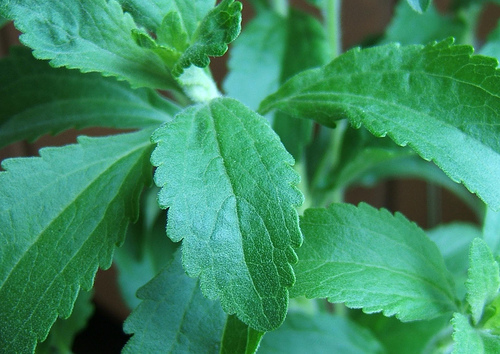 Two weeks ago, the Food and Drug Administration declared a natural zero-calorie sweetener derived from the herb stevia safe for use in foods and beverages, clearing a path for Coca-Cola, PepsiCo and other companies to market it in a variety of products. A long time favorite of natural food lovers, stevia is a shrub native to South America and has 30–45 times the sweetness of ordinary table sugar. Widely available for years in Brazil, China and Japan (they use it in their version of Coke), stevia is banned for use in food in the European Union.

The tale of stevia is quite interesting as it shows how a natural product, albeit controversial, can be banned by the government, only later to be co-opted by the largest multi-national beverage manufacturers in the world and ushered in by the FDA.

Over at Fooducate, there’s a great timeline of how we went from sugar and honey to here. Also worth a read is Jenny Hawke’s “The Bittersweet Story of Stevia.” In an era with serious political and social and health ramifications of sugar and high fructose corn syrup, stevia’s new “natural” label will give it a prime spot as the holy grail of sweeteners.

Until recently, the FDA only allowed sweeteners made from stevia to be sold as dietary supplements, and not as food additives—obviously contradictory, because FDA simultaneously labeled stevia as safe and unsafe, depending on how it was sold. But now, the FDA has indicated that it has no objection to two stevia products—Truvia and PureVia—being used as food additives. Both are already sold as tabletop sweeteners.

The New York Times reported that Cargill, which is marketing Truvia from Coca-Cola, said on December 17th that it had received notification from the FDA that it had no objection to the product, calling it “generally recognized as safe (GRAS).”  PepsiCo received the same letter and designation from the agency related to its sweetener, PureVia, made by Merisant, maker of the popular artificial sweetener Equal.  According to the Times, both products use rebaudioside A, an extract from the stevia plant. It’s this extraction compound that alleviates the herb’s somewhat bitter aftertaste.

Apparently, PureVia is just beginning to hit retail outlets now, while Truvia packet sweetener has been on grocery shelves for months. That’s because federal law allows companies to self-certify products as safe before formal FDA approval.

This is big news for Merisant, the Chicago Tribune reported, noting that the company, which is owned by private equity investors, has been plagued with falling sales in recent years as Equal has lost significant market share to Splenda, another artificial sweetener.

Center for Science in the Public Interest (CPSI) Executive Director Michael F. Jacobson denounced FDA’s decision, and said in a statement, “It is far too soon to allow this substance in the diet sodas and juice drinks consumed by millions of people. It looks like this is President Bush’s parting gift to the soda industry.” A report prepared for the center last summer by UCLA toxicologists found that several laboratory tests have shown stevia to cause DNA mutations in lab animals.

Whether FDA is overlooking serious health repercussions to make way for big business would not surprise most folks these days. What’s less clear is, if, in fact, stevia is safe, as other countries have deemed it to be, why FDA banned and then restricted it for so many years, only to make way for the biggest names in soft drinks to market the heck out of—and one supposes, reap the benefits of—this little leaf from Paraguay.