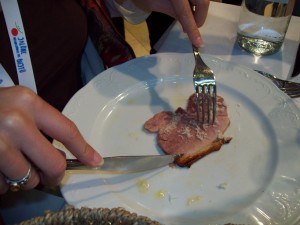 I ate meat for the first time in over twenty years recently.  The moment presented itself after a culmination of many things, primarily an ever-increasing personal momentum within the world of food.  Writing a food column, owning a cookie company, and working for Slow Food Nation kept bringing me face to face with a myriad of dining experiences.  How could I refuse to just take a taste?  To enter, finally, over the threshold of a zone that can still uphold craft, integrity, responsibility, and culture.

At age seven, after a visit to McDonalds with my dad, I finally made the connection that the Big Mac I had just consumed was one in the same as the friendly cows we passed by in the fields on our drive home.  My heart strained and I simply decided I didn’t want to eat things that were killed for human consumption.  Twenty something years later, I am still a strong advocate for animal rights.  I shudder at the horrors of industrialized factory farming and the environmental, health, and economic injustice linked to our current food system.  But I also support the ways in which people are re-instating sustainable methods of meat production, truly choosing to connect to each and every food choice they make and providing their local communities the option to empower their daily eating habits as well.  In addition, various health practitioners over the years repeatedly suggested that a big dose of meat-based nutrients was exactly what I needed for my specific symptoms.  I’ve heard a well respected homeopath exclaim that one of her longtime vegan patients “needs to eat a @$%$@ steak, for god sake!”  For too long I may have kept the door locked tight for the wrong reasons, or simply because it is so easy not to try the key once I became used to a single way of being.

The meal was a press luncheon at the Friuli Venezia corner of Salone del Gusto on October 25, 2008.  Regions of Italy and the differences between them are as varied and nuanced as the designs on the fabrics next door at the Terra Madre convention.  I was driven to sign up for as many opportunities to sample them as possible in the short four days in Torino, verging on the brink of oversaturation and anxiety at the sheer volume of products.  The trade show aspect of Salone was honestly very surprising, as I innocently expected to find humble, small rows of farmers and producers in their ramshackle booths, selling products with scarce labeling and maximum pride.  Instead were four gigantic pavilions jam packed with crowds and discarded sampling spoons and the constant commercial pulse and push to sell, sell, sell.

The adventure began in a rare calm pocket within the craziness of Pavilion #2, where friend and Chef Gabriel Cole has met me to partake in “Buffet from Trieste“, an offering of traditional products presented by the Friuli Venezia Giulia Regional Authority.  The first course, paired with a lovely dry Malvasia, was set down in front of me and I knew right away that this lunch menu would not present any kind of typical vegetarian adaptability strategies I have come to slip into so instantly.  On my plate sat one thin, pink flap of pork, slightly grilled and drizzled with olive oil.  A sparse grating of fresh horseradish was the sole veggie option.  I glanced at Gabe’s questioning look…”Is she going to do it?” and “How the hell are you getting out of this one?” and simply sliced off a corner and jumped on in.

Tender, savory, umami balance and simplicity in one bite…it was delicious.  I forged ahead, knowing without having to ask that at this ground zero of Slow Food my decision had ethical beginnings in some Italian pasture.  Moving on to a saucy gnocchi with pork ragu and the main course, “Bolito Mista”, a final hilarious slap in the face of someone calling herself a vegetarian.  Four parts of the pig, arriving in the form of sausage, tongue, smoked ham and one more item that was beyond recognition to my virgin eyes.  Again, the vegetable sides consisted of three piles of condiments:  mustard, horseradish, and pesto.  A bit too rough of a carnivorous new beginning, I took a couple of bites of the spicy sausage and slathered the pesto on my roll, feeling like I had spent enough time for one day at the devil’s gate.

Finishing up with an apple strudel on vanilla cream with “ossi dei morti” (meaning “bones of the dead”, the Southern Italian symbol for day of the dead in November) cookies was a perfectly apt ending.  I took an inner nod to the part of me shedding away, letting the dusty, habitual ideologies drift like leaves from my core, and waved goodbye as I munched the sweet rosewater pastry that signifies recognition to all creatures that have come and gone before.