Let Them Eat Fruitcake: No Really, It's Not That Bad | Civil Eats

Let Them Eat Fruitcake: No Really, It’s Not That Bad 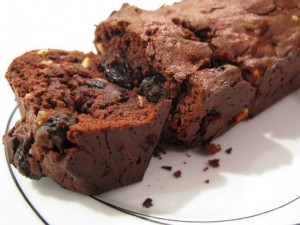 No single food has been insulted more than fruitcake. Perhaps because the original concept of a fruitcake (ie: Crusader road food) was perverted in its modern context. I understand the disgust at your aunt Edna’s leaden weapon catchall version, using Dots soaked in Wild Turkey instead of real fruit. But I was convinced that it didn’t have to be this bad.

What used to serve as essentially a granola bar is now a decadent holiday cake; and as such, deserves to be delicious. So I decided to challenge the old thinking and create a fruitcake more representative of the version long forgotten, employing dried fruit and nuts in their original states, but also satisfying a holiday sweet tooth.

First thing is first: put the cherries in a bowl and pour enough bourbon almost to cover and stir. You will want the cherries to soak for an hour, or overnight if you are feeling frisky. Pre-heat the oven to 325 degrees when you are ready to begin. In a small pot, melt the butter and add the chocolate, stirring until melted. Add the sucanat or sugar and stir to combine (Sucanat is less refined sugar cane, and has a molassas flavor that compliments the chocolate nicely). Pour this liquid combination into a bowl and let cool for 15 minutes. When cooler, add the eggs and stir. Add the flour and combine, then add the walnuts and cherries, either straining or adding with the remaining couple tablespoons of bourbon (Or this also makes a nice cocktail additive). Pour the batter, which should be rather thick (fruitcake was meant to have only enough flour to stick together the ingredients, which is why it is so dense. That being said, alter away), into two small loaf pans and bake for 25-35 minutes. Serve alone or with ice cream.