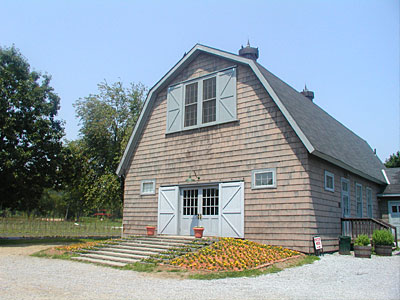 Just inside New York City limits, there is a historic 47-acre farm dating back to 1697. Once owned by Dutch settlers, the Queens County Farm Museum was taken over by the NYC Department of Parks and saved from further development in the mid 1970’s. For 33 years, it has provided much-needed open space and has served as a community center, with visitors and schoolchildren of every age and from every borough in attendance.

As is what sometimes happens with historic preservation, often with the best of intentions, the original purpose of a building or its land fades over time when the role it once served is deemed irrelevant (see Wendell Berry’s essay, The Purpose of a Coherent Community, in his book, “The Way of Ignorance”). Through the years, QCFM has always had a strong educational component, but it downsized their agricultural production from what was once a working farm to an annual 3-acre corn maze for their autumn harvest festival, a pumpkin patch, and a livestock area (for petting, not for meat consumption). They also recently started growing wine grapes on 2 acres.

What happens on far fewer an occasion is a historical preservation effort is given the opportunity to re-envision its mission as something similar to the original purpose 300 years prior—a working farm that serves the community-at-large—in order to meet the needs of New Yorkers today.

As consumers of all stripes come to understand the complexities of our food system and the importance of supporting local growers, Queens County Farm Museum has experienced a surge in the level of interest in what they have to offer. Attendance at the farm in 2008 has seen record numbers, and they are now strategizing how best to meet this growing demand. As a start, this year they hired their first farmer in decades.

On one of the first blustery December days, QCFM held its annual meeting, which was open to the public. It began with the usual reading of the minutes, like every meeting held there over the past thirty years. On this occasion, however, there was something new to report. Nearly two years ago, Queens County Farm Museum teamed up with the NYC landscape architecture firm Quennell, Rothschild and Partners, LLP to re-imagine the farm as a working agricultural center that would teach and practice sustainable farming methods.

Over the course of those two years, countless meetings were held with local Community Board 13, sustainable agriculture organizations such as the Glynwood Center, and many other constituents in order to create the most comprehensive assessment. Beth Franz, a representative from Quennell, was finally able to unveil their vision to the public—which included both the short and long-term goals for the farm. They also outlined the potential stages of installation, given the large capital investment it would require.

While plans are still awaiting final approval from the Parks Department, the community members present seemed very pleased with the new potential ventures to the museum, which include:

• An increase of acreage for farmland and vineyard;
• An increase in acreage in pasture for farm animals;
• A new Green Visitor’s center;
• An education hut and path to woodlands;
• The installation of a pond;
• Possibly a cheesemaking facility.

Meanwhile, QCFM farmer Michael Grady Robertson has already begun turning around their production during his short tenure there. Just a few weeks ago he began selling winter vegetables at the Union Square Greenmarket once a week, and has been selling to restaurants throughout the city. QCFM Executive Director Amy Fischetti recently attended the market with Michael and was delighted to see entirely new avenues for growth. “I can see that there are now more selling and outreach opportunities off the farm than there are on the farm. There is a lot of potential, and a lot of demand.”

And with that, a very promising beginning.