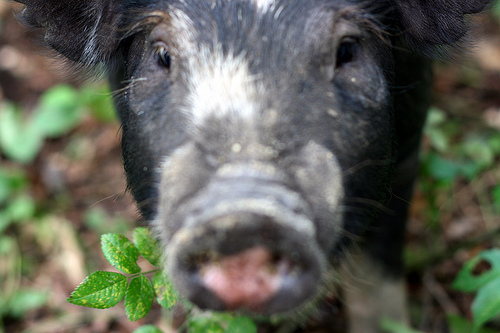 There are few moments more powerful and thrilling for a young person than those in which we learn a skill that we want to and will use for the rest of our lives.  Or those first days when we truly realistically consider our futures – just our next five years, if not more – and realize (or think very much) that we know what it is that will make us happy.  Or that last second we have before feeling we are in that future, that brief moment of conviction that we have never in our lives been less prepared nor more determined.

The Young Farmers Conference last weekend, at the Stone Barns Center for Food and Agriculture, ran the participants on a marathon of such moments.  There were the inspiring speeches and the valuable networking one expects at a conference, and the beautiful meals one expects at Stone Barns, but mainly it was a time to take notes, to ask questions, to observe, and to listen.  Not only were we inspired, we were productive.

We learned how to begin doing many things: raising chickens, breeding swine, growing vegetables in a greenhouse.  We were told how to find land, how to write a business plan for a farm, how to dress up our products so they sell well at market. Many of us who came to this conference were not farmers.  And most of us have so much to learn about farming that we might have seemed comical to the more experienced.  But the presenters – the farmers, growers, breeders, foresters – brought their skills down to our level, to square one, and shared an immense amount of knowledge in hardly eight hours of workshops.

Four-Season Growing. Jack taught us how to calculate the finances of a greenhouse, to know the value of each square foot of soil.  He described the family rotations – six families, each including several varieties of plants – and the number of days it takes for arugula to grow in summer versus winter.  He taught us how he uses the row covers, from what material, at what time of day.  He told us what the temperature should be for certain levels of productivity, what sort of heaters he uses, and how their release of CO2 at dawn catalyzes photosynthesis in that brief, coldest, last moment of the night.  He told us exactly how much money he’d spent on propane, using box heaters vs. air heaters.  He told us how long to wait for the first cut of greens, the babies, and for the second cut, a profitable premium product.  He told us of the compost system and the prop house, the soil and the seeds.  He told us how surely one keeps loyal customers with a 365-day growing season.

Beginning Poultry.  Craig told us what to look for in a hatchery, what to expect in the box when the chicks arrive at the post office, not to go grocery shopping and forget that our box of chicks is in the back of our car.  He taught us how to set up the brooding pen, how the chicks slip on newspaper, how to build the space to keep out rats and raccoons.  He told us what to consider when buying meat chickens (taste, consumer demand, growth-time, cost of production), and showed us the advantages of certain pens, fences, and pastures.  He was clear about why he would choose one bird or feed or pen or another, often simply explaining his personal preference.  “I use the term Animal Husbandry intentionally,” he said, “because this IS a marriage, of sorts.  You really have to like your animals – how they look, and act, and treat you.  You have to get to know them, and like living with them.”

Slaughterhouse Initiative. Judy explained her position at the head of Glynwood Center, a conference center and working farm that has identified a problem in the lack of slaughterhouses in and around Putnam County.  She presented the mobile slaughterhouse project, and spoke of the bureaucracy such a project faces, the services it would provide, and the demonstrable demand for these services she has found among her community.  The conversation jockeyed from urban farmer to historian to farmer-educator to friend-of-a-butcher; from accusations of bureaucratic pandering to business plan proposals, from reminders of top-hat butchers in early American markets to a polemic on the seismic shift in mentality that must take place before slaughterhouses and butcher shops are ever expected to produce anything of high quality.  We learned that we have a lot to learn about meat.

My general expectations for the conference were that it would confirm my dislike of the wealthy nature of Stone Barns, that I would meet few true farmers and more farmer wannabes (like myself), and that it would be like most conferences, where energy is high, productivity is low, and the conversations between workshops are the most valuable part of the experience.  Those conversations were valuable, but so were the workshops, and so was the energy, and so was the adjustment of my view of Stone Barns.  However the farm-restaurant handles it’s finances, the people who run the farm are full of a knowledge that young people need, and at least for two days, were wonderfully willing and able to teach it.

I remember first meeting The Greenhorns’ Severine, in Berkeley this Spring, when she (was figuring out how I might be useful to her, and) rather bluntly asked what I knew how to do.  I sheepishly said I could write decently, and I could organize people and run meetings.  She interrupted me within seconds: You have to treat your life like a toolbelt!  Start filling it up with tools!  You have to learn how to do things!  Two days at a conference might not count for much, but for many of us, it was a time to first touch the tools we wish to acquire, and a joyous early step towards making our lives full.

Annie Myers is the Forager at The Spotted Pig in New York City. She studied Agriculture and Regional Food Systems as a Reynolds Scholar at the Gallatin School of NYU, and has previously worked for the New Amsterdam Market, BrightFarm Systems, Just Food, and Added Value. She writes regularly for her own website, Thoughts on the Table. Read more >