Changing Our Thinking on GM Seed 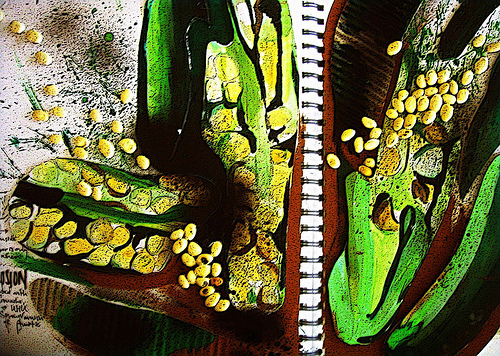 Last week, I opened my copy of the New Yorker, and stumbled upon an ad for agricultural seed and chemical giant Monsanto.  “How can we squeeze more food from a raindrop?” the ad asks, above photos of corn and soybean seeds.  Then below, “Our goal is to develop seeds that significantly increase crop yields and can help use 1/3 less water per unit produced.  Producing more.  Conserving more.  Improving farmer’s lives.  That’s sustainable agriculture.  And that’s what Monsanto seeds are all about.”

False advertising is defined by the Federal Trade Commission Act as that “which is misleading in a material respect; [taking] into account (among other things) not only representations made or suggested by statement, word, design, device, sound, or any combination thereof, but also the extent to which the advertisement fails to reveal facts material in the light of such representations or material with respect to consequences which may result from the use of the commodity…”

Its not hard to assume that the dispute over genetically modified seeds is still so uninformed because of deep deception through marketing.  Ask the average citizen, and she might agree that we should trust science to find all of the answers to our global food woes. This is because we have mostly been informed by the entities claiming that we are making a giant step forward, preventing famine.  On the other hand, opponents of GMOs argue that science is showing how arrogant it can be, redesigning nature for the sake of profit.  Since scientific achievement for its own sake no longer benefits from government programs, Monsanto and other companies step in and fill the void with a scientific agenda.  (Tom Philpott has a nuanced take on GM food and mouse fertility at Grist, and for more background, read on here and on Wikipedia)

And meanwhile our government is complicit in our ignorance on the subject, with many politicians from both parties moving back and forth from the private sector, many of whom have spent time working for agribusinesses, all unwilling to challenge the status quo and enforce laws on the books.  Monsanto is more than happy to keep us confused, and so are their shareholders.

What is a poorly educated farmer in the developing world to do, when offered the chance to plant one type of seed, and be provided with so-called high yields and “the answer” to questions of pest control?  The advocates for traditional intercropping and pest management are too marginalized to make a big enough difference, because the force with the money gets to spin the story and the traditional agriculturists aren’t those funded few.

The worst part of the level of confusion we’ve reached on frankenfoods is that, exacerbated by the recent food crisis, entire countries think that scientific seed is their only alternative.

Continents are also being influenced by groups like the Gates Foundation, which, as noted in the New York Times Magazine on October 10th, has invested $264 million in Alliance for a Green Revolution in Africa (AGRA).  In the article, the group insists that they are not merely interested in repeating the Green Revolution as it went over in India and Latin America.  But critics have argued that their approach is not a radical enough divergence.  I recently wrote Raj Patel, author of the book Stuffed and Starved, to ask him whether he thought it was possible to have a sustainable Green Revolution.

“I absolutely think we need a sustainable Green Revolution.  But it has to be with the kind of technology that Vandana [Shiva]’s working with, or Via Campesina is working with.  An agroecological revolution is one that isn’t just about what chemicals and what genes to use in the fields, but changing our relationship with the earth. That’s not something that the Gates folk are ready to hear (we’ve tried). Moreover, though, there’s something very wrong about a private foundation doing something that should be government policy – and the only reason it isn’t government policy is because governments have been prevented in the past 30 years from doing this sort of agricultural work and research. I’d say if something is to be sustainable in Africa, shouldn’t Africans be involved, rather than the passive recipients for US largesse (which hasn’t worked out very well).”

Often, we are so amazed with ourselves and our scientific abilities that we neglect to question whether or not a scientific achievement really does improve lives, or have long term beneficial effects. The last 100 years have been an anomaly economically, with oil driving most of our innovations.  From this vantage point, it seems that humans are conducting a risky experiment and gambling the future of our species on short term benefits.  And while we waste time on initiatives that act like band-aids, like New Zealand’s plan to reduce the 50% of its carbon emissions attributed to the raising of livestock by breeding less flatulent cows, we could be dealing more with the root of these problems: land management and re-allocation, empowering the public for a home gardening revolution, subsidizing only the farmers that are true stewards of the land, guiding the public on eating less meat, busting up monopolies and stripping their lobbying power, and incentivizing science to take an integrative approach to the study of living systems.  These are real ways here in the US (where the most acres of GM seeds are planted) to boost yields, to begin to feed people sustainably, to improve farmer’s lives, and to set an example that the world can follow.