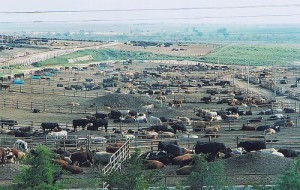 Ironically, as I sit here in south Texas with my mother and step-father, an ardent meat eater morning noon and night, I have been given further evidence to use at the table as our political discussions get food-political.

According to the New York Times, one of the biggest issues being discussed at the environmental summit where ministers from 187 countries will be gathering this week and next in Poznan, Poland is what to do about farm emissions.  Here is an excerpt:

The trillions of farm animals around the world generate 18 percent of the emissions that are raising global temperatures, according to United Nations estimates, more even than from cars, buses and airplanes.

But unlike other industries, like cement making and power, which are facing enormous political and regulatory pressure to get greener, large-scale farming is just beginning to come under scrutiny as policy makers, farmers and scientists cast about for solutions.

Our current infrastructure for the meat that we produce and consume, according to Dr. Pachauri, might never be sustainable.  Crowding farm animals on feedlots, creating cesspools of waste and high emissions as a result, has been the way to feed many omnivores up until now.  But when keeping animals on crop-yielding farms in fewer numbers allows their waste to become useful to the farm, meaning higher prices and less meat to go around, but lower emissions and better health for the public, it might be the role of policy makers to guide the public on these matters.

Dr. Pachauri stated in the New York Times article that the most useful immediate solution would be to “reduce meat consumption.”  But talking to people about what they eat is a touchy matter.

My mother recalled not eating much meat as a child, growing up in a small town outside of Oklahoma City, where her family couldn’t afford it for every meal.  And she spread her underdeveloped taste for meat to me.  My stepfather grew up in a large immigrant family in Ohio, where meat was also the measure of your wealth.  As he has moved upward into the middle class, he has taken the eating of meat at every meal to be an outward manifestation of his achievement.  And he is not alone.  In the developing world, specifically China, India and Brazil, meat consumption has increased by a third in the last decade.

How do we convince people that eating less meat is the best option to begin to deal with farm emissions, especially when the agribusiness lobby has so much power to stir up controversy, and the idea could be seen as unpopular?  I am hopeful, because my generation (I’m in my late 20s) is more receptive to these very necessary changes.  I believe the best answer starts at the grassroots level, re-educating people about the pleasures of cooking based on the peasant cuisines of the world, which are notably less reliant on meat.    Meat must be priced to reflect the real costs it incurs – the price to clean up Confined Animal Feeding Operation waste, recover downriver fish populations, the costs incurred within our health system for obesity, diabetes and heart disease.  Meat needs to be expensive again so that people will consume less of it, and begin again to honor the life of the animal they are taking for a meal.