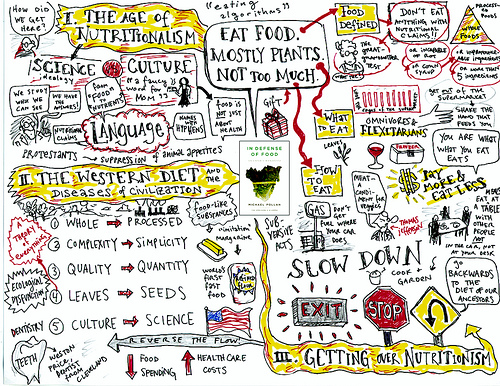 Yesterday evening, while we were all polishing off the leftovers of our Thanksgiving feasts, Bill Moyers Journal featured Michael Pollan speaking about the changes he proposed for our food system in his article Farmer-in-Chief, from the New York Times Magazine.  The article has developed a life of its own, and a following of individuals who have proposed Pollan be selected as the next Secretary of Agriculture.  But Pollan states that he has “an understanding of [his] strengths and limitations,” and that being a part of a government system so beholden to corporate agribusiness would make it very hard for any independent-minded person to get things done.  What he proposes instead, is the appointment of a White House food policy czar (another job he would not like to be selected for), who would connect the dots between the health crisis, hurtles to energy independence, failing education and immigration policies, and global warming, which all have roots in the food system currently in place.  His argument for this position was that there is “a war going on between the public health goals of the government and the agricultural policies. And only someone in the White House can force that realignment of those goals.”

While this interview focused more broadly and for the general public on the nuts and bolts of how exactly we are “eating oil” (fertilizer, pesticides and food transport over long distances), and how we are subsidizing fast food (commodity subsidies focus on corn and soy, which is mostly processed, and fed to cows and pigs), many important issues were brought up.  Not shying away from the debate over the future of oil resources, Pollan encouraged learning to grow some of your own food, and building relationships in the local economy.  “When the oil runs out, we’re going to need to be able to feed ourselves from within 100, 200, 300 miles,” he said.  He also touched again on our food insecurity, bringing home the point by example, “having a highly centralized food system such as we have where one hamburger plant might be grinding 40 or 50 million burgers in a week, where one pre-bagged salad plant is washing 26 million servings of salad in a week, that’s very efficient, but it’s also very brittle or very precarious. Because if a microbe is introduced into that one plant, by a terrorist or by accidental contamination, millions of people will get sick. You don’t want to put all your eggs in one basket when it comes to your food safety. You want to decentralize.”

He also beat the drum on two of Alice Waters’ pet projects, school lunch (“Lunch should be educational. Right now the school lunch program is a disposal scheme for surplus agricultural commodities… Let’s look at it in a different way. This should be about improving the health of our children. So maybe it belongs in Health and Human Services. Maybe it belongs in Education. [Let’s] get the Department of Agriculture’s hands off of it.”) and putting a garden on the White House lawn (“Eleanor Roosevelt put a victory garden in, in the White House in 1942… over the objections of the Department of Agriculture, who thought it was going to hurt the food industry if people started growing food at home… And by the end of the war, there were 20 million victory gardens… producing 40 percent of the fresh produce in America.”)

Its worth watching here, as there is also a video about the urban farming and farmer’s markets in East New York, Brooklyn.