Revelations at the Compost Bin: From My Grandmother's Moldy Cake to this Year's Thanksgiving Fig Chutney Recipe | Civil Eats

Revelations at the Compost Bin: From My Grandmother’s Moldy Cake to this Year’s Thanksgiving Fig Chutney Recipe 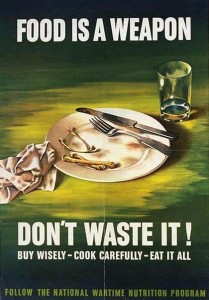 As we look to incorporate ways, as individuals, to live the change that many of us voted for, let’s start by thinking about Thanksgiving. Lately, I can’t stop obsessing about three timeless holiday classics which will surely be under consideration during this year’s meal: leftovers, the economy, and cranberry sauce.

For me, looming thoughts about the first two topics arrive whenever I am putting food into the compost bin.  I immediately feel the invisible burn of my mother’s eyes on the back of my neck as I throw out some old mashed potatoes.  The thought of wasted food and money begins when I recall my mom rummaging through the compost and retrieving something that I casually and even smugly discarded. My response to her investigations/excavations was, “Um, Mom, it’s going into the compost, not the garbage…Just relax. Gross.”  To which she retorted somewhat defensively, “I just did not grow up that way. We did not waste food that was still good to eat.”  Somehow her foreign accent has always added a chilling authority to her declarations, but then again maybe her power lies actually in the simple fact that she is my mother.

The conflict of the experience, however, is clear: I grew up throwing away food that was still good to eat. In fact, I still do. Most people do too; we just lie to ourselves about it. Haven’t you said to yourself, “It’s cool, I am composting it”?  While composting can assuage some of my guilt because of it’s multitude of benefits for both the environment and my neurosis, its time to change how much food we toss in the compost bin.

According to research by University of Arizona Professor Timothy Jones in 2004, American households throw out over one pound of food per day on average. Between 40-50% of edible food never gets eaten. America WASTES more than $100 billion worth of food per year.  Think of all the mortgage backed securities and credit default swaps we could have been buying with that money! And to add a cherry to that garbage sundae, rotting food in a landfill releases the damaging greenhouse gas, methane.

Now, on to another extreme: moldy cake. I will always remember the repeated times my grandmother, with her failing eyesight and robust sense of frugality, would try to serve us children old cake as a treat. I’d like to think that she gave us that cake because she believed that food was precious, valuable and not to be squandered. She lived the majority of her life on a farm, struggled through two wars, and understood the cycle of life in relation to the effort of food production. I want to live her ethic and this year’s Thanksgiving dinner will provide the opportunity, not by serving old food, but by trying my best not to waste it.

The first step is to reduce our collective food waste.  As major shifts in the economy occur, this concept is beginning to enter our consciousness again, and there are many inspired websites, blogs and advocates to learn from. Jonathan Bloom has an excellent resource for more information. He is writing a book on food waste,  and helped Food Runners recover food from the Slow Food Nation event held over Labor Day weekend in San Francisco.  There are many practical tips here, including obvious, but often forgotten, suggestions like making lists and planning meals. This is something that most of us do for holiday meals, but it would be even better to extend these ideas to our daily routines. The not so obvious suggestions included menu portioning and better food storage tips. My suggestion is: Put a money jar on the kitchen counter, pay yourself each time you save something from the bin, and start saving the almost $600 a year that the average family of four loses on food waste.

Next week, instead of looking in the back of the fridge at the leftover cranberry sauce made from out of state cranberries, I will be making a fig and currant chutney with California dried fruit. Not only will it taste good with the turkey, but it will be equally delicious on a piece of yesterday’s bread with smear of fresh cheese. Of course, I will thoughtfully freeze this year’s leftovers if I don’t eat them up because I want to avoid my mother’s scolding and moldy cake in my future.  So people, this Friday after Thanksgiving, ask not what you want to eat, but what needs to be eaten… and where are the freezer friendly containers?

Rehydrate figs and currants in a small bowl with just enough hot water to cover and let sit for at least 30 minutes. Sauté with sliced onions in olive oil over medium heat until tender yet toothsome. Add slivered garlic and cook for a minute or two more. Season with salt. Drain water from figs and put in a small pot. Add balsamic vinegar and reduce by half over medium heat till almost syrupy. Put figs/currants, onions/garlic, orange zest, coriander, fennel and bay leaves in pot and warm gently, stirring occasionally. Allow to cool, then adjust salt and add a few more drops of vinegar to achieve desired acidity.

Michelle Fuerst is a private chef and cooking teacher in Northern California. Her time working in the kitchens of Zuni Café and Chez Panisse taught her a deep respect for ingredients and the integrity of a simple meal. Most recently, she served as the pickles and chutney curator at Slow Food Nation. You can contact her at: michelle@homemadecook.com Read more >