Stumptown Coffee Brings the Producer to You | Civil Eats

Stumptown Coffee Brings the Producer to You 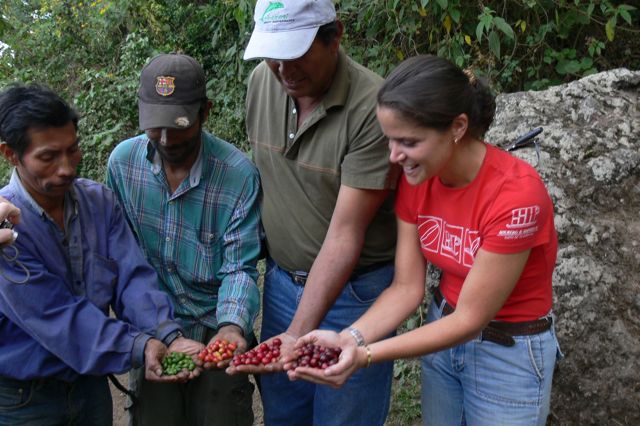 For every sack of apples wearing its “I’m local” label proudly, there is a cup of coffee that will never be able to proclaim such a thing. Between all of those trips to the farmer’s market to shake hands with the farmer growing your dinner, and short of traveling to the coffee farm yourself, what is the devoted locavore who wants their morning brew to do?

Stumptown Coffee Roasters has come up with one solution: they bring the coffee farmer to you.

Last week Stumptown, which has roasteries and shops in Seattle, Portland, and soon, New York City, held the fourth in its series of “Meet the Producers” events in Portland and Seattle, pouring cups of El Salvadorian Finca Kilimanjaro coffee for all of those who turned up to hear the grower of that coffee speak. Aida Batlle, a fifth generation coffee producer whose family left El Salvador amid a burgeoning civil war when she was seven, returned in 2002 to the land that her family has owned for decades after years of living in Nashville and Miami. She knew little about growing coffee when she returned to El Salvador, and when her Finca (farm, in Spanish) Kilimanjaro won first place in El Salvador’s Cup of Excellence competition in 2003, her US-based family was as shocked as she was.

Coffee grown by farmers like Aida and roasted and marketed by companies such as Stumptown is part of a recent push to surpass the standards set by labeling regimes such as organic and Fair Trade, Rainforest Alliance and Bird Friendly. These labels, now commonly found on coffees sold through both high-end cafes and also grocery stores, have attempted to fulfill coffee drinkers’ demand for knowledge about where their coffee is coming from and how it was grown and processed.

Aida sells to Counter Culture Coffee, based in Durham, North Carolina, to Sweet Maria’s, based in San Francisco, and to a handful of roasters in Europe and Japan through Direct Trade guidelines. The waiting list to import her coffee is long, and she maintains a firm policy of only selling to buyers whom she has not only met but also respects. This reciprocal relationship between coffee grower and roaster/distributor is the hallmark of the Direct Trade process and is also what makes growing organically, paying high wages, and supporting the community surrounding Aida’s farms possible.

From her three farms in western El Salvador, Finca Kilimanjaro, Finca Los Alpes, and Finca Mauritania, Adia distributes beans that are harvested from the highly prized Bourbon Arabica varietal and also the rarefied SL28 varietal that was brought to Latin America in the early 1900’s from Kenya (namesake of the farm “Kilimanjaro”). “Something magical happens when the beans from these two varietals [are blended] together,” she says, though it was an accident that they formed a blend at all. El Salvador struggled to prop up its coffee industry during and shortly following its civil war, which formally ended in 1992. Coffee farms were abandoned and overgrown; the crumbled transportation infrastructure left few routes for the coffee beans to travel from farm to market. The occurrence of uprooting older, heirloom coffee trees and replanting with hybridized varietals is often ironic: during times of war and economic crisis, farmers leave their heirloom varietals in the ground because they can’t afford to replant with costly hybrids. Aida has committed to preserving the presence of her two heirloom varietals despite being able to afford replacing them, however. These older trees, some of which bear fruit for eight decades if well-tended, usually have more deeply established root systems and fewer budding nodes on their branches. What does that mean to those among us who might never see those twisted, grandfather plants on the coffee farms? Juicier coffee cherries, yielding a sweeter, more complex coffee bean.

Of course, the new hybrid coffee varietals yield more cherries per plant than those such as Bourbon and SL28, which is precisely why so many coffee growers in El Salvador think Aida is crazy. Converting derelict farms into sites of high-cost input organic coffee production, replacing older trees with still low-yielding varieties, spending years working towards organic certification: none of these practices follow the typical Salvadorian coffee growing mantra of quantity over quality. 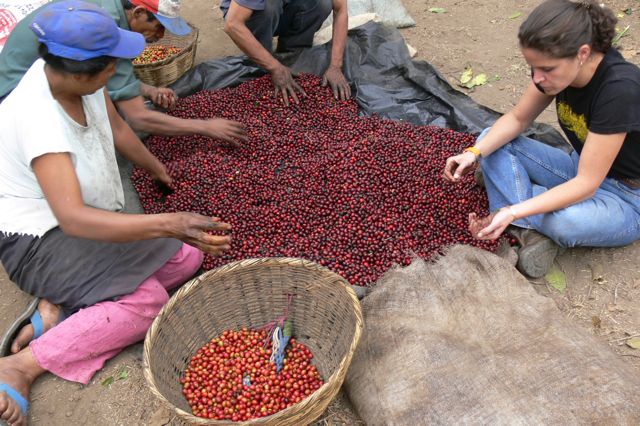 Aida attended a Fair Trade information session back in 2002 but immediately realized that Fair Trade certification wasn’t going to work for her. She was considered to be too large of a landholder under their rules and was also reluctant to form a cooperative, a requirement for entering into the certification process. Despite the absence of Fair Trade certification, the employees who work on Aida’s farms (she employs up to 70 during the harvest season) are paid the highest wages of any coffee farmer in the country. So high, in fact, that coffee farms in the vicinity have had to increase wages after their workers found out that Aida was paying substantially more.

Besides the favorable economics behind Direct Trade (the processing mills she works with are also paid more than they ever have been), she believes in emphasizing the story behind the coffee rather than any specific adorning label. Duane Sorenson, founder and owner of Stumptown, remarked, “Some of the poorest farmers I’ve seen in my life were Fair Trade farmers. The cooperative managers were living well, but not the majority of the farmers. Some Fair Trade co-ops have good practices… but we don’t buy their coffee just because it’s Fair Trade.” He spoke also about having a visceral response to the working conditions on coffee farms, of being able to tell by showing up and meeting the farmers how the workers were treated, and then taking the stories of individual farmers back to coffee drinkers. Aida herself said she wonders why people would pay $3 for a cup of coffee (or $12.50 for 12 ounces of beans, which is what Stumptown sells her coffee for) if it doesn’t have a compelling story behind it.

There may still be a lot of “coffee miles” between farm and cup but never before have coffee drinkers and coffee growers been so connected. Sheldon Rosevear, a devout Stumptown customer, admitted that he cried at the first Stumptown “Meet the Producers” event earlier this year, which brought Panamanian coffee farmers to Portland and Seattle. “These events are the best examples of absolute globalism coupled with absolute localism that I’ve seen,” Sheldon said. “These farmers are so used to throwing their beans on the commodity market, they usually don’t even know where the beans go beyond five kilometers from their farms. When they visited some of the restaurants carrying Stumptown coffee they were just shocked to see that not only does the menu have Stumptown’s name printed on it but his name and his farm’s name too. Their eyes welled up when they saw that.”

A few attendees at the Seattle event were particularly interested in Aida’s employee practices, and asked her to elaborate on how she gets them to sort the coffee cherry into such precise piles according to ripeness. Aleco Chigounis, Stumptown’s globe-traveling coffee buyer, spoke up and told them how hands on he’s seen Aida be during his visits to her farms. She sorts the cherry alongside her workers, rolling up her sleeves to do all of the jobs she asks her employees to do. Duane agreed. “Aida’s blessed farms are in a special part of the world,” he explained, “but it hasn’t all fallen into her lap—she has to wake up every morning and bust ass. The only way you can get employees to respond to you is to pay well and be involved.” The back row, along with three-dozen other attendees, listened intently to their responses.  As it turned out, the back row had come on behalf of Starbucks.