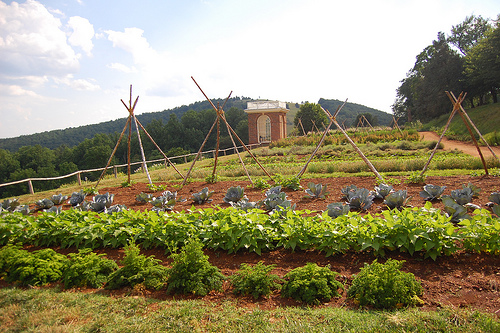 Today on The Brian Lehrer Show, Michael Pollan spoke about the change in food policy he’d like to see under the next administration.  Although there has been a move to nominate him for Secretary of Agriculture, Pollan stated that while he is flattered, he thinks he wouldn’t make the vetting process (See The Botany of Desire, Chapter 3: Marijuana.  But then again, our new president has a past of his own).  He did however say that he felt that President-elect Obama is one of the most synthesis-oriented presidents we’ve had in a long time, and he feels that while he might not implement all of the ideas Mr. Pollan put forth in his recent letter in the New York Times Magazine, he feels confident that we will begin to see change in the right direction.  Perhaps an ode to Thomas Jefferson by adding an organic garden on the White House lawn?

He discussed his idea for a new position at the White House, Food Policy Czar, who would connect the dots between trade, health energy and environmental policy as they relate to food.  He also talked about how the affordability of good food should be addressed at the government level, so that the fresh produce is price competitive with snack “foods.”  Following that, he spoke about making a new definition of food, that no longer includes things like soda, which has no true nutritional value.  And shockingly, he took a stab at the milk industry, saying, “We have been sold a bill of goods on milk, that its the only way to get calcium, which it’s not, and that you are a bad parent if you don’t give glass upon glass of milk to your children. This is the dairy lobby talking… I’m not saying you shouldn’t drink it, but we idolize milk as the ultimate health food, and there are some real questions whether it is that.” (Find calcium in spinach, sardines, tofu, collards and molasses to name a few other sources)

listen to the entire segment here:

Photo: Made in Mississippi, Jefferson’s garden at Monticello