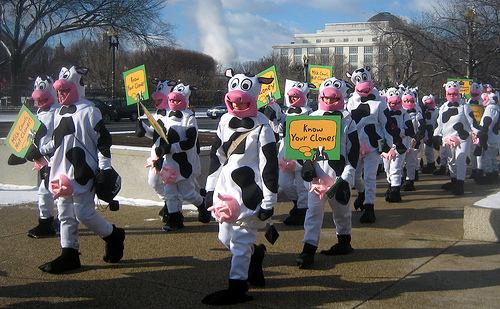 According to a Consumer Reports poll released this week, Americans are becoming increasingly concerned about U.S. food safety, and the overwhelming majority want the government to do more to monitor the American food supply.

Currently, the Food and Drug Administration (FDA) is only required to inspect domestic food production facilities (other than meat plants, which the USDA inspects daily) once every 5 to 10 years; foreign facilities are inspected even less often. According to the poll, two-thirds of Americans believe the FDA should inspect domestic and foreign food-processing facilities at least monthly. Eighty-three percent are concerned about harmful bacteria or chemicals in food, and 81 percent are concerned with the safety of imported food.

“The American public wants to know more about their food, where it comes from, how safe it is, and will vote with their dollars to support highly meaningful labels,” says Urvashi Rangan, senior scientist and policy analyst at Consumers Union. “Consumers want to know that the food they buy meets the standards they expect—our poll shows that right now, that is not the case. Whether that means that ‘organic’ fish eat 100% organic feed without contamination, or that people know which meat and dairy products come from cloned or genetically engineered animals—consumers want the government to ensure safety, quality and meaning in the food marketplace.”

Next week, the USDA National Organic Standards Board (NOSB) will meet to decide what the USDA “organic” label should mean for fish. The NOSB will vote on their recommendations for “organic” fish production that currently allows the use of fishmeal from wild fish—which has the potential to carry mercury and PCBs—and open net cages, which flushes pollution, disease, and parasites from fish farms directly into the ocean, adversely impacting wild fish supply, sustainability, and health of the oceans. Currently, fish is allowed to carry an organic claim as long as it isn’t a USDA “organic” label. For a good backgrounder check out this article or listen to this segment on Public Radio International’s Living on Earth.

An overwhelming majority of Americans polled—93 percent—agree that fish labeled as “organic” should be produced by 100 percent organic feed, like all other organic animals. Ninety percent agreed that “organic” fish farms should be required to recover waste and not pollute the environment and 57 percent are concerned about ocean pollution caused by “organic” fish farms. More than 4 in 10 polled are concerned about the health problems associated with eating wild fish.

As for cloned food animals, 70 percent polled want them banned entirely. Ninety-five percent want foods derived from genetically engineered (GE) animals to be labeled as such, and more than 60 percent wouldn’t even buy meat or milk products derived from cloned or GE animals.

After soliciting public comments for more than three months, USDA is finalizing its standard for meat that could carry a “naturally raised” claim. The government proposes a very limited definition—only that the meat should come from an animal not given antibiotics, artificial hormones, or animal byproducts. A vast majority of consumers disagree, and think that meat labeled “naturally raised” should come from animals who were not fed chemicals, drugs, and/or animal byproducts, who were raised in a natural environment, who ate a natural diet, who were not cloned or GE, who had outdoor access, who were treated humanely, and who were not confined.

This is just some of the information gleaned from the poll, but it reveals growing consumer expectations for the labeling of food.  On the brink of a new administration, perhaps a new food policy agenda will emerge, one that meets these expectations for food safety.