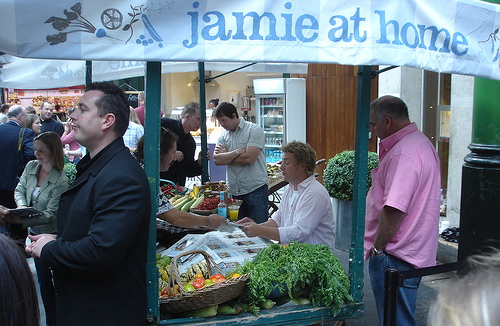 Chef Jamie Oliver was on The Leonard Lopate Show today to talk about his new book and Food Network show called Jamie at Home.  The premise of the book is to encourage home gardening, and interspersed within the tantalizing recipes are tips anyone can follow for growing tomatoes, zucchini, rhubarb, strawberries, potatoes and more.  The recipes follow the seasons, and focus on the specific ingredients you learn to grow in the pages.

During the interview, Oliver talked about some of his food policy interests, including his recent campaign to bring public awareness to the realities of factory egg farming.  His efforts, shown in the film Jamie’s Fowl Dinners, is said to have singlehandedly increased the consumption of cage-free eggs in England.  He also spoke about his next project, The Ministry of Food, based on the 1940s program in England that helped individuals be more self-sufficient at home at a time when the country was literally starving.  He says the goal is to get England in the kitchen again, focusing on really easy recipes anybody can cook.

At one point in the interview, he compared McDonald’s in America with the same chain in Britain, giving the company higher marks abroad for selling organic milk, cage-free eggs and higher grade meat.  While I have strong feelings against supporting any fast food restaurants, if only because they have had such a bad record and continue to do next to nothing in most countries, it goes to show you what happens when regulations go into effect: they are followed, and not necessarily to the detriment of McDonald’s bottom line.

Listen to the full interview here: