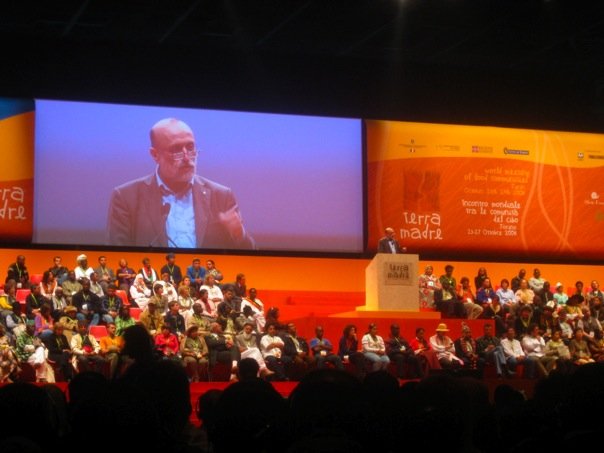 The organizers of Terra Madre 2008, the “world meeting of food communities” that took place in Turin, Italy from October 23rd to 27th, deserve a round of toasts and raised fists. This year’s edition brought together 8,000 farmers, cooks, academics, advocates, activists, eaters and everyday people from over 130 countries. And of those 8,000, over 3,000 were delegates under the age of thirty – myself included – gathering under the new banner of the Youth Food Movement. We represented the emerging movement of young people who, defying the precedent of recent generations, are working passionately to dig back into the earth and put real food on all of our tables. That Slow Food International was able to mobilize this young army is testament to its commitment to empowering young people to continue the work our grandparents left behind. So to those who made it possible, and to the many thousands who came and contributed, Thank you—and bravo.

The impression of someone who has never seen so many people from every foot of the globe gathered together under the giant roof of an Olympic speed skating rink is that the movement to fix our broken food system is strong. We are many, and we are working on so many creative and extraordinary projects. I was continually humbled and inspired by the people I met, particularly the young people: the recent college graduate from Uganda who has returned to his elementary school to teach kids to grow food; the anthropology student from Brazil who is organizing landless farmworkers to occupy arable land; young farmers in the U.S. banding together to start businesses; the teenage farmers who came to Terra Madre with farmer parents. When I sat down with these people, we didn’t discuss policy initiatives and compete for good ideas; we listened to and encouraged each other.

It’s been said before, but the best ideas generated at Terra Madre don’t come from the rooms where the panel discussions take place but from the coffee stations where the free espressos are given out and from the bus rides back to our hotels. That’s where American students taking the Real Food Challenge talked to farmers from Ecuador saving the seeds of their ancestors and cooks from London growing their own ingredients. Agriculture was nearly always the topic of those conversations. We discussed how to apprentice on farms, how to find access to land and how to secure credit and capital and supplies and viable markets. Admittedly, we didn’t discuss many of the techniques our generation will have to use on our farms or of the job and social incentives we’ll need to create in order to drive millions more young people back to the land. Terra Madre wasn’t the place, though, to get into those details; we can discuss them now that we’re home and have a U.S. Administration that’s more receptive to our suggestions.

The words from Terra Madre that still ring in my ears came in Sam Levin’s speech at the opening ceremony. Sam is a 15 year-old student at Monument Mountain High School in Great Barrington, MA. In his first year at school, he petitioned his teachers to let him and other students plant an organic vegetable garden on school grounds. A year later, not only have they planted a 1,000 sq. ft. garden and learned to grow vegetables, but they are serving produce from the garden in the school cafeteria and are working with students at other schools nearby to plant gardens on their campuses, too. After going to Slow Food Nation and impressing everyone who heard him speak on the Soap Box and at the Eat-In, Sam was invited to Terra Madre and asked to speak to the entire audience of 8,000 delegates. He closed his speech with a pledge that resonated with my own reason for coming to Terra Madre:  “My story is not a success story… it’s a window through which all of us can glimpse the power of youth. It’s a promise to all of you that we will finish what you started. It’s a message to our parents that we will be the generation that will reunite mankind with the earth.”  3,000 young people didn’t go to Terra Madre to tell the old folks to get out of the way because youth are going to save the world. We went to ask for help. Our bright-eyed enthusiasm amounts to nothing if we try to rebuild the food system from scratch, without the centuries of knowledge stored in our ancestors’ hands.

At Terra Madre, young people agreed that our commitment to food activism is not just a career choice but a sacred passion for righting what’s wrong. We’re ready, and in a time of new hope we’re excited to be young and able. Put us to work.