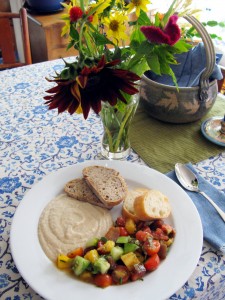 My friend Josh, an organizer for Rainforest Action Network (get involved!), always tells me that without optimism we have no hope of changing the world. Maybe that seems obvious if you think about it, but it requires a fairly radical repositioning of my social-political framework which was born out of a punk rock anger at all the injustices of our world and a sort of despondency mixed with fear that it could never change. Now what kind of introduction to a food-related post is this? Well, it’s one that gets at the inspiration and hope I had listening to Billy Bragg say much the same thing as Josh last night at the Somerville Theatre. And in hearing it at that moment, I sat back and thought about all of the ways to find hope in the everyday and, somewhat strangely perhaps, realized that one thing I have been continually inspired to hope by this year is the current tomato trend.

If it seems like every year you are seeing more and more varieties of local, heirloom tomatoes at the farmer’s markets, at specialty stores, at conventional big box grocery stores, you’re right. Though seed-saving on the whole has experienced significant declines, especially in the last decade, many growers are saving, sharing, planting and tending a great number of unusual tomato plants, and the market for them is growing as well. Despite the fact that these heirloom fruit are more labor intensive to grow, more delicate to bring to market, and thus more expensive than their perfect red round laboratory counterparts, they are increasingly popular.

In many ways the trend of increased popularity for heirloom tomato varieties goes against big market-shaping assumptions about what people want from their food. These tomatoes are not cheap, they’re not uniform, they’re not consistently available, they are sometimes even unattractive with lumps and bumps and dark ridges or strange colors that do not fit into our archetype for the perfect tomato. And that’s just the thing, they’re changing the way both producers and consumers think about food. Heirloom tomatoes are on the frontline of expanding possibilities for produce, creating opportunity and incentive to get invested in trying new varieties, support crop diversity, encourage farmers to grow real food from seeds without patents and to say we value and support this kind of production.

There are few people who are not feeling at least the looming shadow of fear caused by the implosion of the credit market, and yet my farmer’s market is busier than it has ever been and people are willing to pay almost four dollars for a pint of cherry tomatoes. I recognize that this is mark of privilege (though there are always customers paying with food stamps at the market), but I also choose to think of it as progress. I like to think that the huge piles of heirloom tomatoes stacked on plywood planks every Saturday morning that dwindle quickly through the opening hours are a sign that people are increasingly willing to pay a real cost of food production for real food. Maybe others look at it the same way I do, as a matter of priorities. I choose to prioritize food and I think that tomatoes were gateway produce for me in this regard. My first year of grad school, cobbling together Boston rent and bill coverage out of a pretty paltry stipend, standing at a farmer’s market table I compared the cost of our pantry staple, Goya black beans, to the cost of heirloom tomatoes and wondered, could it possibly be worth it? I decided that it was. It was worth it not just in that moment as instant gratification, but as a macro thing, as a broad choice for the future of food production.

Fast forward six years to my kitchen window sill this morning in late October and I’m staring at four heirloom tomatoes ripening above a truly obscene, if artful, pile of local squash mostly from my Parker Farm’s CSA (plus an extra red kuri and birdhouse from the farmer’s market that couldn’t be resisted) and I realize that my heirloom tomato-spurred philosophy has been broadly extended. I value food, I value the people who grow food, I particularly value food that comes from my Commonwealth and in so far as it is reasonable for me to do so, I will pay for it because that’s the only way to keep it coming. Watching as the tomatoes year after year become an accepted and valued part of the late summer and fall for people gives me hope that we can broadly shift our ideas about food and put more care into it. Food might seem like a fluffy kitten of a problem compared to other things going on in the world, but our attention and investment in food systems is vital on a macro level and our willingness to put time and energy into cooking and eating and sharing food with each other does not a little to dent our dependence on impersonal and unhealthy factory food and our “bowling alone” culture.

I know I’ve said it before, but food choices are political in both a capital P and baby p sense and in each sense a possibility for change exists. Serving my favorite tomato soup made with rich red tomatoes with craggy tops and tiny golden tomatoes, each one near to or having burst open with juices, from a farm in Lundenburg where I’ve actually seen them growing transforms me in a way that opening a can could not. The question is though, how does that transformation matter? The cynic in me could say that it doesn’t, that it just serves to make me feel good and prop me up on my privilege as a person who can obtain quality foods. A spirit of hope in me though says that it matters in terms of my ability and willingness to extend out from that, to find value in considering all of my choices, beyond food, considering their impact on the world and in my own life. Beyond all the day to day noise, life really might just be as simple as finding joy in something and holding onto it, transforming yourself with it.

That was what Saturday afternoons this summer and fall were all about for me. Though my weekends tend to be the busiest part of the week, I carved out a little ritual that brought me more joy than seems possible: flowers from the yard and or market, a selection of heirloom tomatoes and herbs, white bean puree accented with Spanish olive oil, sea salt, fresh mint and lemon, fresh baked bread, and time to enjoy it all.

Emilie Hardman is a sociologist by training, an archivist by experience and a lover of food by nature. She runs a custom organic and vegan baked goods business in the Boston area, where she lives. Her writing can be read at The Conscious Kitchen Read more >