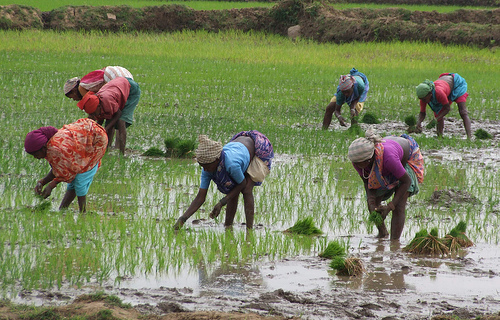 The New York Times ran a special food-themed issue of its Sunday magazine a week back. It was kicked off by a fine piece by Mark Bittman, who observed quite rightly that the conversation being had in the magazine’s pages reflects America’s new, and healthy, interest in what they’re eating.

Indeed, just a few years ago, it would have been difficult to imagine this sort of interest, and even harder to imagine that the New York Times would countenance the sorts of politics espoused in Michael Pollan’s Farmer in Chief essay, or David Reiff’s subtle dissection of the Gates Foundation’s African Adventures.

I like David’s piece a great deal, not just because I appear in it as a reasonable person, but because he captures exactly what’s wrong about the Northern do-gooder in Africa. For the record, a mistake crept in to the piece – I’ve never actually met Raj Shah – but the piece certainly captures how I feel about the Alliance for a New Green Revolution in Africa.

And yet, despite all that, the issue had one or two gaping holes. Labour didn’t really get a look in and, most important, the entire issue was almost wholly silent on the issue of gender. One doesn’t have to look far to see women food producers and food-makers taking on the inequities of the modern food system. Just today, from their meeting in Maputo, the women of Via Campesina released this declaration. And Dan Moshenberg, who sends much of the finest material to me for this blog, took the lead in writing this letter to the editor which, alas, the editor decided not to print.

The New York Times Magazine October 12th Food Issue is a measure of how far the debate around agriculture has come. A few years ago, it would have been inconceivable that Sunday’s glossy section could be devoted to a mosaic of pieces about the politics of food, from belly to bourse, from private purchases to public policy. We still, however, have far to go. One neglected element would have brought coherence to the disparate pieces: women.

Certainly, women were mentioned in the issue. Mark Bittman noted that cooking is no longer the exclusive purview, burden, or task of those called `housewives’. With women pressured or choosing to enter the waged labor force, men are encouraged or forced to cook for themselves and even, occasionally, for others. In her discussion of the ethical kashrut movement, Samantha M. Shapiro recalls the cultural and religious traditions of her own family, in which men would slaughter, skin and butcher animals, and women would purchase the meat, soak and salt it, and prepare it for the family. Michael Pollan urged the next President of the United States to expand the WIC program for low-income women with children.

There’s much to admire in, and much to debate over, these descriptions of women. But women are more than contemporary household cooks (since they are still a minority among paid chefs), more than the stories of how it was done in our family in the good old days, and more than the recipients of government handouts.

In much of the world, and in particular in the Global South, women are the primary toilers of the earth, even if they are a minuscule portion of the owners of land. For example, while women produce the majority of food consumed in the Global South, the OECD has noted that women own 1% of the land mass of Africa. If that seems a little far away, there are plenty of examples of women producing food closer to home – consider the fate of Maria Isabel Vasquez Jimenez, a farmworker who died of heatstroke in May this year while harvesting grapes in California, the latest in a long line of women casualties in our modern food system.

Women aren’t only central to understanding how food is produced – it’s hard to tell the full story of food distribution and food consumption without them either. The food crisis discriminates against women – 60% of those going hungry are women and girls. Michael Pollan almost touched on this when he noted that in recent months more than 30 countries have experienced food riots which are, more often than not, protests that result from planned and coordinated action by women.

All of these stories, and the big story they add up to, is a story of women. Women farmers, women care providers, women wives, women mothers, women daughters, women aunts, women heads of households, women consumers, women workers, everywhere in the world. If food matters, as we certainly agree it does, then women must be accounted for because, when it comes to food, women count. Perhaps in the next food issue, the Times might move a little further to doing this particular piece of arithmetic.