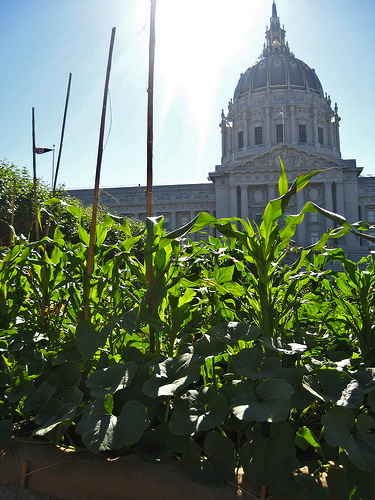 In fifteen days, Americans will make an important decision: who will take the reigns and get us out of this mess.  One topic the candidates have mostly left out of their speeches on the campaign trail thus far is food.  Whether they realize it or not, when either John McCain or Barack Obama sit down next January to begin the task of fixing our economy, to promote green energy in order to produce the jobs they’ve both promised, and to deal with the climate crisis and health care, food will be the unavoidable issue that keeps cropping up.

Perhaps the candidates don’t yet realize food’s role in these issues, or maybe they assume that because less than 1% of the population is currently working as a farmer, the topic does not appeal to the voting constituency that matters most.  But I think we are ready for a president that is willing to create a more nuanced food policy as opposed to leaving it unchanged in thirty years.  Telling farms to “get big or get out” as a philosophy for food security has long ago reached the point of diminishing returns.  So what will the next president do about it?

McCain’s agriculture policy can be found under the heading Prosperity for Rural America.  There is little here to show that a McCain administration would stray very far from current agriculture policy that favors agribusiness.  Recognizing agriculture’s role in national security is a good start.  But in McCain’s plan, there isn’t even a peep about organic or local agriculture.  He supports unchecked free trade, meaning that our lower priced subsidized food will compete with other nations that might not have such subsidy programs, disenfranchising small farmers in developing nations.  Should McCain follow through with his threat to end subsidies, however, there is no evidence here that he would offer any alternatives to struggling farmers.

He also views technology and growth as the sole measure of our agricultural potential.  Scary is McCain’s plan for upping production: to “direct the USDA to carry out comprehensive research to help develop more stress-resistant, higher yielding crops to increase production per acre,” giving a further carte blanche to corporations like Monsanto, which have dominated the genetically modified foods and pesticide sectors for decades.  McCain sees bio-technology as the key to “reducing reliance on petroleum-based inputs, and improving the long-term sustainability of agricultural production.”  But the track record is clear, genetically modified foods do carry unforseen consequences, require much oil in the form of pesticides and the energy moving the machines spraying them, encourage practices that strip the land of productivity over time and encourage less diverse crops and by extension, less diverse diets.

While McCain supports funding nutrition assistance programs, including indexing food stamps to reflect the current cost of living, he also seeks to cede the marketing of healthy diets to the fruit and vegetable companies, which have special interests at heart when doling out such information.

By comparison, Obama’s plan, Real Leadership for Rural America, reflects actual change from the current corporate-friendly policies.  Though for the most part lacking in concreteness, his plan goes further by recognizing the problems that previous administrations have been unwilling or unable to discuss.

Obama supports capping commodity subsidies at $250,000, and looks to close loopholes that allow farmers to subdivide their operations into multiple paper corporations.  His plan talks about regulating Concentrated Animal Feeding Operations (CAFOs), which raise 40% of our livestock and are one of the largest polluters in America, with tougher air and water pollution standards.  Extending from that, the plan states that there will be limits placed on Environmental Quality Incentives Program (EQIP) funding to CAFOs, so that instead of taxpayers, the largest polluters must pay for their own environmental clean-up.

He promises to strengthen anti-monopoly laws, which thrills me, though I worry that riding on the Archer Daniels Midland corporate jet during the campaign has fueled Obama’s interest in ethanol, that company’s largest emerging industry, even though it has a poor net return on energy invested ratio (currently 1 unit of energy invested nets 1.3 energy output) and is destroying car engines.  Here I agree with McCain: corn-based ethanol production should no longer be subsidized by the U.S. government.

Both agriculture plans tie in energy, but Obama’s plan goes further to seek to improve the quality of life in rural America.  Community is an essential element to building local economies.  The Obama plan includes providing locally grown, healthy foods to school meal programs.  It also promotes encouraging young people to become farmers through training programs and capital gains tax breaks for those selling their land to beginning family farmers.  Obama’s plan also gives importance to encouraging organic and sustainable agriculture through increased funding to help farmers become certified.  But most impressive: “Barack Obama and Joe Biden recognize that local and regional food systems are better for our environment and support family-scale producers.  They will emphasize the need for Americans to Buy Fresh and Buy Local, and will implement USDA policies that promote local and regional food systems.”

Does this mean that the Victory Garden on the White House lawn that Alice Waters has been promoting and that Micheal Pollan suggested in last week’s New York Times Magazine might be within reach?  We will have to wait and see what happens on November 4th.