Refusing the Spoon of Food 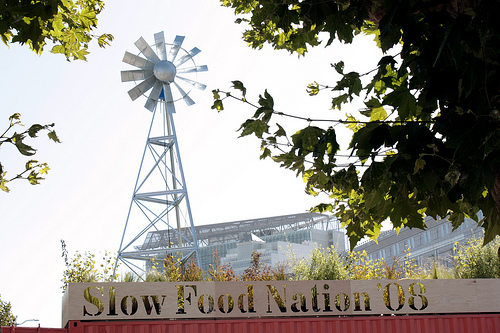 Labor Day weekend presented a milestone in the sustainable food movement as gourmands and activists convened in the Bay Area at Slow Food Nation’s first pass at assimilating the pleasures of food, food pathway transparency, and open conversation about the policies that govern its production. Attendants and passersby ate, celebrated, and engaged, during a spirited instant when a bare sketch of an embryonic food culture began to appear.

The various events involved never aspired to describe or even gesture to all the contours of the food landscape. Even so, this inability—to do and be all things to our eating conscience—underscored a vital question: what should Slow Food do and be? The question was examined a Slow Food Nation-sponsored panel on the Wednesday following the festival.

So it was that days after pleasured and pained visitors alternately paced the sandbag-ringed spirals of kale outside the civic center and ate salami contemplatively in Fort Mason’s cavernous halls, Vandana Shiva, Michael Pollan, Fred Kirschenmann, and Raj Patel laid clear the intricacies and extremities of our food crisis, grounding their examinations in the weekend’s themes and concerns. Their questions and assertions were a clarion call. They pieced the disparate shapes of the Slow Food question together in a rough and nubby metaphorical fabric. The original poetry of the term “Slow Food” was reawakened; we were reminded that the right to pleasure is not exotic, privileged, and specialized, but concrete, human, and universal.

When a child starts to eat, he exercises his right to refuse food. He shakes his head in a universal gesture of rejection. Michael Pollan, who invoked the gesture, suggested that its universality derives from the commonality of that first objection, a gustatory one. The part poetic-part practical Slow Food movement should seize upon that image of original protest, and demand that we all, farmer, factory-worker, and foodie, purse our lips and shake our heads at once. Imagining such a large-scale refusal, one realizes how many neighbors’ heads we would see, as we momentarily expanded the scope of our daily vision, how much more of our landscape we’d suddenly perceive.

We Slow Fooders should graft this denial onto our inchoate agenda. As much as we tout and support food that is good, clean and fair, we should protest food that is bad, dirty, and unjust. We should call for a national hunger strike to demand our right to real food, which is so inextricable from our right to pleasure—which should not be, by Jeffersonian accounting, the exclusive province of the exclusively rich—a right so imbedded in human existence you can’t dig around its shape deeply enough to find its boundaries. Perhaps the very tip of the pyramid, which is how Vandana Shiva protectively cast the visible, viand-scarfing, wine-slugging pleasure-prioritizing American Slow Food movement, should look down the long shape of its base and lift it up through stark, symbolic social action.

Maybe we, who, as Raj Patel pointed out, are for the first time in human history being “made for our food” rather than the other way around, should take the opportunity of this moment in the spotlight and defend the “right” in the “right to pleasure,” rather than the pleasure. And then, once the powers that be have capitulated, have read and signed the Declaration for Food and Agriculture, unveiled on August 28 at Slow Food Nation’s opening ceremony, we can all break fast together, eat eggs laid by hens we’re allowed to keep in our backyards, fry bacon we’re allowed to buy from farmers down the road, sop it up with bread baked with unadulterated, unsubsidized flour, milled in many mills, in many ways, by many hands. Then, we can feast.

Photo: The Inadvertent Gardener Used by permission. All rights reserved.