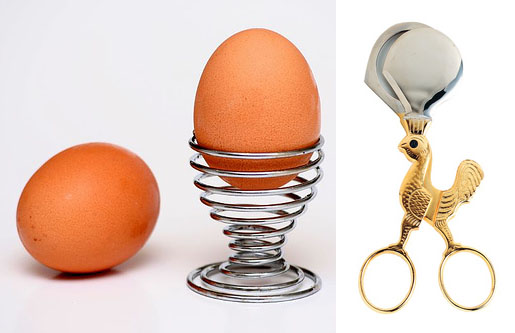 One thing that separates the Slow Food Gadgeteer from other, more sensible cooks is not being able to leave a simple ingredient well enough alone. Consider, for example, the egg, which as you know is nature’s perfect food, comes in its own container and generally requires only heating with salt and pepper.

So if the only other thing you might possibly want to do is melt butter, why do I get fixated in the eggscessories aisle?

Egg timers, egg poachers, egg separators, egg beaters, egg slicers: I’m not the only one who seems to think you need more than gentle coaxing to get an egg out of its shell. (Check out these egg boilers.)

For years I totally relied on an egg-shaped gizmo that went right into the hot water and changed colors to indicate when the egg was done. Finally the thing broke; I now know a soft-boiled egg is ready when the toast pops up.

But that hasn’t stopped me from craving an egg topper. These handy devices cleanly slice the top off a soft-boiled egg. They come in several forms; the one I like looks like a pair of embroidery scissors with a chicken theme. Can’t you just picture it leaning insouciantly against a ceramic egg cup?

Here’s my fantasy: I slice the tops off a dozen eggs, empty them out and refill them with scrambled eggs, delicately garnished with minced chives. Then I pass them out to amazed guests with another thing I’d like to own: a set of silver demitasse spoons.

Deborah Baldwin is a New York writer who does some of her best thinking in the kitchen.