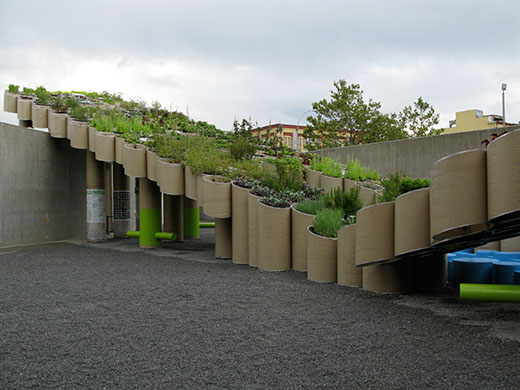 Amale Andraos and Dan Wood of Work Architecture are the architects behind New York’s innovative urban farm for the Young Architects Program at MoMA. They called their project Public Farm 1. They gave me a tour of their edible green space, which was on view at PS1 Contemporary Art Center in Queens, New York.

“Our first idea was a kind of floating mega-structure farm, a kind of bridge in the air,” said Wood. “But we realized that no one was going to see the farm if it was up in the air, and that it would be very, very heavy. So the entire farm is a folded plane.” Andraos added, “It’s also tongue in cheek, because obviously its not such a mega-structure, it sort of falls down and becomes more accessible and more real at the moment it touches the ground.”

They used mostly cardboard barrels filled with organic soil to build the checkmark-shaped structure. In previous years, beach themed projects were featured at PS1. But this year, Wood and Andraos petitioned to push the concept.

“We felt that the urban beach had run its time,” said Andraos. “I think its very much a link to 1968, liberation, ‘under the pavement the beach’, students movement, and we felt that forty years later, you know for the anniversary, we felt that our generation needed a different motto for what would make our cities and lives better. And so we proposed ‘Above the pavement, the farm.’”

Barrels of growing produce seemed to float up into the air, cascading downward into a cyan-colored wading pool. The effect was to invite you to take a closer look, or just to sit on one of the seats among the vegetables with your feet in the water. Getting people intrigued and thinking of ways to feed urbanites locally was all a part of their plan.

No farm would be complete without animals, so Wood and Andraos brought in five laying hens and twenty chicks from the Queens County Farm. The chicken coup has a solar paneled roof, providing the power for the activities like the juice bar, the sound and video installations and the irrigation pump. And they created a pool, which was a requirement of the project.

“The pool is kind of the Central Park within the plane of the farm in a way,” said Wood. “So you can sit on these round blue tubes with your feet in the water and be surrounded with vegetables and the smells of the farm.”

Visitors were free to pick the reddening tomatoes, tiny peppers and ripening squash. It was important for the project to re-engage people about what they eat and where it comes from.

“It’s a project to buy local,” said Dan. “You know, the average American meal travels 3000 miles from farm to plate, so we wanted to cut that down to 300 feet.”