The Real Picture: Our Team and Resources | Civil Eats

The Real Picture: Our Team and Resources 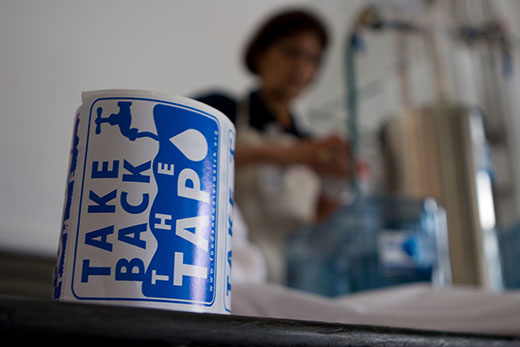 This is part 3 of our 4-part series on the process of creating Slow Food Nation. See the intro to the series here, Part 1 here and Part 2 here.

When I came on as Executive Director in December 2007, Slow Food Nation had exactly one employee. Our dedicated board chair Katrina Heron provided top-level support, but we were a team of just two staff – our content director Sarah Weiner and myself. We had about $70,000 in the bank, and our biggest assets were a clear idea of what elements the event could be built from, the strong vision of a “good, clean, and fair” food system from Slow Food, and the overarching goal of being a platform for a broader food movement. Although Slow Food USA is our parent organization, they were understandably unable to provide any financial resources or any staff support beyond promotion of the event to their membership and planning the Slow Food Convivium leader’s congress to be held during the event. During the months of planning, many California Slow Food Convivium leaders were huge assets, organizing Slow Journeys, fundraisers and joining the Slow Food Nation team. At the peak of our capacity in June and July, the Slow Food Nation team totaled 32 people (average age of 28), about one-third working for free as full-time staff, all crammed into a 1600 sq ft office. The purpose of this post is to tell a bit more of the story of how we grew from December 2007 to September 2008 – with a focus on funding.

We knew that Slow Food Nation could not evolve into a space for the few – it had to be broad and inclusive – we had to encourage dialogue, discussion, engagement, and participation to make this thing work. I believed that people would ignore Slow Food Nation if we were judgmental and demanding about how they had to participate, or how they had to be in order to be welcome. Too often I had seen Slow Food and other food events not succeed in being inclusive because there was a sense that you already had to be “in the know” about food and food politics to even understand the language of the event. I tested the response to this vision with a few conversations with corporate sponsors, and realized that although some funders were doubtful of our capacity to actually execute such a big and broad event, they were thrilled with the inclusive vision. I was also wary about having too much corporate visibility at the event – we wanted to keep the vibe at Slow Food Nation low-key and not at all reminiscent of a trade show like Fancy Food or the Natural Foods Expo. We wanted to feel polished and smooth, but authentic and real. I felt strongly that it would actually prove to be an asset for our sponsors in the long term to really focus attention on the artisans and food producers instead of directing all eyes towards logos and corporate stands. In general, potential sponsors were excited about the celebratory and inclusive vision, and were happy that this event would not be branded with a message of “do this, not that”. Although I had hoped that we would find a major partner for the whole event – a presenting sponsor who could underwrite the total of $1,000,000+ hard costs we anticipated – we left that hopeful fantasy behind pretty early, and realized that the funding for the event (similar to the content) would be a tapestry of hundreds of different sources, ranging from the purely philanthropic to the totally corporate. In retrospect, having literally hundreds of separated funders along with a few big sponsors was extremely useful for Slow Food Nation – it held us accountable to many different people in may different sectors and made us work to make sure that the event was really delivering economic returns in branding and visibility for the values-driven businesses who are so crucial to building a more sustainable food system.

Our first major funder – Rodale – came through in early spring. At the time, we had still not worked out all the options for visibility, but were starting to think laterally. Instead of a classic “footprint” for an event stand, how about offering “ownership” of a certain area to a top-tier partner? What about offering logo visibility in the website and on event signage? We explored personalized email blasts, collaborative press strategies, and slowly evolved a sponsorship package that offered corporate partners a range of visibility for their investment. More importantly, we really engaged potential partners in a conversation about what we could offer them, and tried to avoid a one-size-fits-all approach to proposals. At the same time, I started conversations with a range of foundations. Grants are not a typical way to finance and event, but because this event was so focused on supporting the non-profit and social change community, as well as delivering strong social returns, many foundations were interested. Grant funding was key to securing funds for a few key staff positions – our Agrarian Arts and Justice programs among them – as well as to funding some specific event elements like Changemakers Day, the Native Foods pavilion, and more.

Basing an event on hundreds of conversations and fragile human networks requires more people and time than a classic event model of selling stands. I learned that by involving so many groups, restaurants, collaborators, etc – so crucial to our mission of serving as a broad platform for the food movement – we also made our planning process rather complicated. Instead of one person sitting down and dreaming up the workshop topics, we invited proposals and received 150, which then needed to be parsed, grouped, synthesized, followed up on, etc. Instead of choosing one type of vinyl and one foamcore to make everything in the event space, we had 25 architects, five builders, and hundreds of collaborators. This pushed up the staff time needed and then the budget numbers up – it seemed (ironically) like the more engagement we encouraged the more money we needed. But a magical shift started to happen around May as the many people we had reached out to involve in the event planning in January and February were stepping up and really owning pieces – solving problems before they happened. More than the funding coming into place, this shift in the collaborative spirit of the event was a clear sign that this event as we had envisioned it was really doable.

The team grew slowly but surely, there were a few months where payroll was rather tight, but by May we had enough guaranteed contracts and sponsors to be confident in reaching budget. Around the same time, we found an incredible event producer—Dominic Phillips Event Marketing (DPEM)—which partnered with us and offering in-kind support and decades of event management experience. DPEM’s role was to execute all of the logistics of the event: rentals, build outs, volunteer management, and more. DPEM came on board after two other events companies told us that what we were trying to do with green building and thousands of products was too complicated. Although DPEM told us recently that they really did not think Slow Food Nation was possible at the start, they said they warmed to us because of the great food in the office, the idealism and enthusiasm, and – most importantly – a real passion for our mission, and for building awareness and understanding of food, health and the environment.

Although we met our targets for fundraising for Slow Food Nation, we certainly did not exceed them. Ticket sales, the sale of Patron’s packages, our victory Garden fundraising dinner, and other efforts were necessary to meet all of the hard costs of the event. I will not have a final amount of profit from the event until early October, but I am confident that there will be sufficient for seed money for a future edition of Slow Food Nation. More importantly, I hope that what we’ve learned about fundraising, and quickly building our small non-profit via diversified revenue and aggressive promotion via in-kind partnerships will be helpful for other organizations. Please be in touch if you are planning (or dreaming) of planning a values-driven, inclusive event and would like to learn more about our process, resources, business plan, or more.