The Backstory of the Taste Pavilions | Civil Eats

The Backstory of the Taste Pavilions 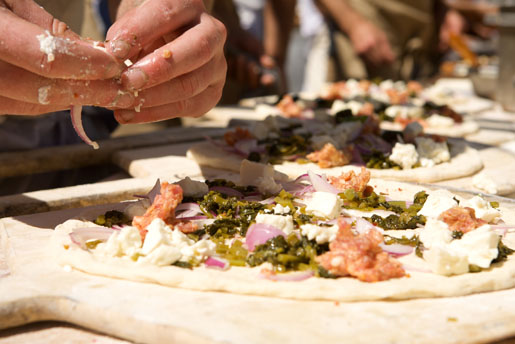 This is part 2 of our 4-part series on the process of creating Slow Food Nation. See the intro to the series here and Part 1 here.

The Slow Food Nation team knew that it had to live up to the “Nation” in the title by providing a venue to celebrate America’s foods as part of the mandate of celebrating a good, clean and fair food system. The question was how to do that without requiring that hundreds of food producers come to San Francisco and incur the costs of travel, lodging, and demands on their valuable time. One thing I had heard loud and clear during our initial outreach was that farmers and food artisans were tired of coming to events (Slow Food and other) and being asked to do everything for free, including donate product and work, for the benefit of (often well-heeled) ticket buyers.

So we came up with the idea of buying all the products and building the stands that would feature the product for our event. If the producer had the means and desire to attend, they were welcome, but this event would support them and would strive to not be a financial burden on the people we were trying to help. The only exception was the wine pavilions, where we asked each featured producer to donate one case of wine because we simply did not have the financial resources to purchase them all. This would turn the trade-show concept on its head—no stall fees, vendors, or sponsor zones.

To do this, we needed people to lead each of the areas, and we identified “curators” to select and present products in each of the areas. Simultaneously, we restarted a conversation with a group of architects that had been involved in some of the early planning for the event and were eager to build a collaboration, led by Hans Baldauf, a partner of BCV Architects. Hans’ vision led to the concept of pairing each curator with an architect, and giving them a limited budget and the requirement to use only recycled and repurposed materials to build an exhibit that was educational, engaging, delicious and values-driven.

The architects were creative and bold – taking the mandate of using simple agricultural building blocks from the agricultural landscape (pallets, crates, etc) to the max and coming up with groundbreaking ideas about representing taste, land, and flavor via the built environment. I am proud to say that over 90 percent of the materials that were used in the Pavilions were borrowed and are already being reused, and about 10 percent have been broken down and recycled. There’s one outstanding example of this philosophy: the Native Foods Pavilion was built entirely out of native grasses and materials gathered in the Bay Area and built on site.

We learned that being really green is a little more expensive (the building and materials alone of the Taste Pavilions cost Slow Food Nation over $300,000) and a lot more complicated than the status quo, but the beauty, creativity, and passion communicated through the pavilions were worth it. The Pavilions, and the revenue and sponsorship dollars they generated, are also a key part of the global approach of Slow Food Nation. The ability to make the entire Civic Center venue free of charge was due in large part to the possibility of generating revenue through the Pavilions. Via the Taste Pavilions, we were able to partially subsidiz the costs of running the Civic Center venue, including the Victory Garden, Slow on the Go, and Marketplace.

Although we had originally hoped to price entry into the Taste Pavilions at $25/head, we struggled to find a way to make the numbers work at that level – especially since the curators responsible for selecting and purchasing products for the Pavilions also raised concerns about the ability to handle flow and anticipate volume of product – which eliminated the possibility of having a general opening of the pavilions that could potentially be flooded with participants.

We also wanted to limit participation to ensure that the experience of visiting the pavilions was pleasant and that people had the time to enjoy a “slow” interaction with the food and design. Our event producer came up with the idea of two daily timed sessions of 2000 people each (about half the total capacity of the Festival Pavilion at Fort Mason), and we decided to address our concerns about access at the $65 ticket price by offering a few (imperfect) solutions: food producer and chef scholarships at $25 via our website (about 300 tickets) as well as gifting tickets to community organizations via the Slow Food Nation Justice program (about 50 tickets).