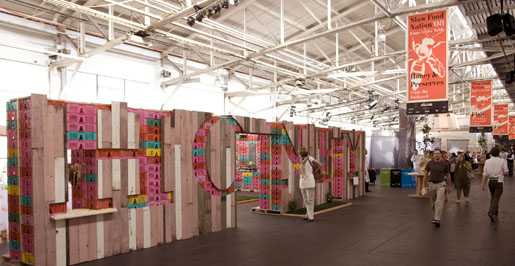 This is part 1 of our 4-part series on the process of creating Slow Food Nation. See the intro to the series here.

How best can an event be used to build a “slow food nation”? Katrina Heron, the chair of the SFN board, and I set out to answer that question in December 2007, shortly after we both joined the organization. We convened a creative planning group to assess what the event could achieve, inviting business and non-profit leaders, as well as people who had been involved in the early stages of the event in 2007 when Alice Waters had originally conceived of hosting a grand event celebrating Slow Food.

The mandate we developed with their input was clear: Serve as a platform for the food movement, allow the various leaders in the environmental, advocacy and justice movement to use the event as a stage while adhering to the values of the global movement of building a good, clean and fair food system. The reality was tough: $70,000 in the bank account at the start of 2008, two staff people, and a tiny sublet room for an office (more on that in tomorrow’s post).

My immediate background prior to working for Slow Food Nation was running a very hands-on and grassroots distribution company serving low-income public schools and hospitals with local produce, as well as running healthy food advocacy programs in public schools around the state and the California Buy Fresh, Buy Local campaign supporting small family farmers in the state. I was extremely aware of the need for non-profits to access the promotional power of Slow Food. Although I had deep links to Slow Food’s California membership, I was perplexed that the local non-profits were not able to leverage the Slow Food network successfully to promote the real on-the-ground work.

I had all the necessary connections, having worked for Slow Food International for years, but was not able to connect the dots between the consumer activists at Slow Food and the real infrastructure-building programs that were building a new mainstream for American agriculture. I saw the opportunity to lead Slow Food Nation as a chance to do just that—leverage the Slow Food movement to support the incredible range of activities led by non-profits, triple-bottom-line-businesses, farmers, and educators around the country. I hoped that Slow Food Nation could provide a grand stage for them to share their stories, products, and more with an audience that Slow Food Nation convened.

The outreach component of event planning started officially on February 15 in a Slow Food Nation Town Hall meeting. We invited all of the non-profits, advocates, health professionals, and educators we knew. Alice Waters and Mayor Newsom gave speeches voicing their support for the event and I asked the audience of 200 people a simple question: “How can Slow Food Nation serve you?” Many of the requests that came out of the meeting grew into different elements of the event. We developed numerous (yes, perhaps too many) event activities to be able to engage and assist as many partners as possible. The Changemakers Day agenda was built with feedback from non-profits during that meeting, and we presented the fundraising “Slow Dinners” and other collaborative programs for feedback.

We decided to focus each stall in the Marketplace on a single food product as a result of hearing from local farmers market associations that they did not want the Slow Food Nation marketplace to be another (competitive) farmers market, but rather an advertisement for farmers markets globally. I had seen the success of the single-product markets at Slow Food’s international events, and decided to present a version of that at Slow Food Nation. The effect is to focus attention on a single special product by facilitating conversations and encouraging curiosity.

Another outcome of the planning process that was reinforced in our Town Hall meeting was that Slow Food Nation was ready to be the home of a discussion. The Slow Food movement has not been successful yet in the U.S. in meaningful inclusion or support of the food justice movement, so we invited food justice organizational leaders and Slow Food leaders and provided a space for conversation at Changemakers Day. That certainly did not solve this issue, but it was a beginning, and one that engaged in tackling a challenging and complex problem.

Another example of the fruits of the collaborative process are programs like fooddeclaration.org, which was a direct response to the request “how can we serve you” by Roots of Change. Throughout the planning process we made an effort to give as much ownership and autonomy of the event programs as possible to the many collaborators—taste pavilion curators, partners, and more. This was strategic as well; without real ownership and participation from a wide range of people with concrete skills, this event would never have happened.

At the same time, this reaching out and engagement required trust in the network, and belief that although the resulting event would not be as homogenous and complete as having built and designed every piece ourselves, it would be more powerful, more creative, and have more of that beautiful chaos and at times conflict from which true innovation can be born.