Albert Straus at the Commonwealth Club 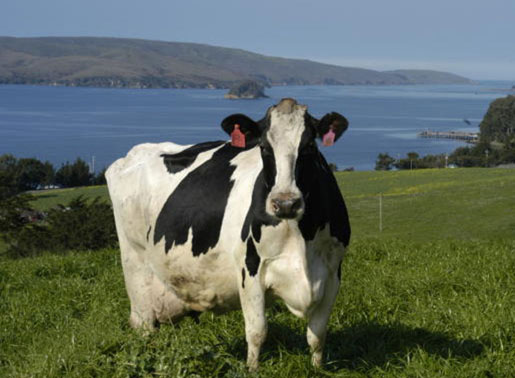 If I were making a list of the pioneers of the sustainable food movement in Northern California, Straus Family Creamery would be one of the first names I would add. For decades, the family dairy farm has been trying new approaches to reduce the environmental impact of their farm while also improving the quality of the product.

In 1994, long before the word organic had much meaning beyond of a tiny population, the Straus Family Creamery became the first dairy west of the Mississippi River to be certified organic. A few years later, they were one of the first dairy farms to generate electricity from cow manure. (Many additional ‘firsts’ are listed on the “Farm Tales” section of the company website.)

As part of the “How We Eat Series” at the Commonwealth Club of California, Albert Straus, president and owner of the creamery, told an audience in San Francisco about the dairy’s past, present and future.

Straus has been close to dairy farming throughout his life. He grew up on the farm in Marshall, California that his father, William Straus, started in 1941 with 23 cows. After going to college at California Polytechnic in San Luis Obispo, where he wrote his senior thesis on creamery operations, he returned to the family farm. He currently has a herd of 300 cows — most are Holstein, some are cross-breeds of Holstein and Jersey. It is a “closed herd,” which means that replacement cows come from within the herd (i.e., no outside animals are brought in).

The organic certification regulations do not allow the use of antibiotics, something that can be a challenge. Straus meets that challenge by focusing on prevention: they ensure that the cows have clean bedding and frequent health checks. Switching to thrice-daily milking (most dairies milk twice a day) gives the staff more contact with the animals, thus allowing closer monitoring of their health (it also results in 10% more milk production). Having a closed herd, Straus said, is another factor that helps keep the animals healthy.

The diet of the Straus herd is mostly grass—about 80% is either grass from the Straus’ pasture (the farm includes 660 acres of non-irrigated pasture) or silage (a fermented grass product used during the dry season). The non-grass portion of the diet includes corn from the Midwest and barley, oats and flax from other parts of the country. Straus has their own mill to grind grains because most of the other mills are not certified organic. Feed is one of the largest expenses on a dairy farm — Straus estimates that it is 40 to 60% of the farm’s expenses — and so there is always an incentive to find cheaper alternatives. In the past, he has experimented with unusual feeds like the soybean pulp left over from tofu making, the rice cake from sake, and cacao hulls. Results with these feeds have been mixed. (Other livestock operators have been trying to cut costs by using much more shocking feeds, like “cookies, licorice, cheese curls, candy bars, french fries, frosted wheat cereal and peanut-butter cups” according to a Wall Street Journal article excerpted by FarmPolicy.com)

One of the novel features of the Straus operation is their “waste to electricity” system. The system, called a methane digester, collects manure in a covered container, where it is digested by microbes in an aerobic or anaerobic environment (aerobic = with oxygen, anaerobic = without oxygen). The microbes emit a gas that is rich in methane and can be burned in an engine to produce electricity. The digester produces all of the electricity needed on the farm, and sometimes even more, which results in their electricity meter running backward. Straus uses some of the manure-generated electricity to get around town: he drives an electric car. He has also been working on an all-electric feeder truck for the past few years (a conventional truck that has had its diesel engine replaced with an electric motor and a bank of batteries). 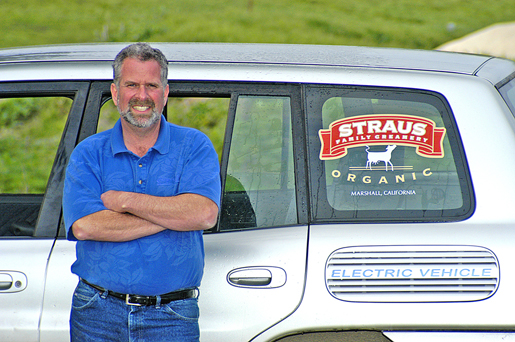 Operating a dairy that sells direct to the public involves much more than feeding and milking cows. Packaging, for example, is a big consideration. Straus sells their milk in reusable glass bottles (a deposit is required at the time of purchase and can be reclaimed upon return of the bottles). Straus said that each bottle is used six to eight times before it needs to be recycled. The authors of “Food, Energy, and Society” estimate that four uses are needed to make up for the additional energy needed to manufacture, wash and transport a reusable glass bottle relative to a plastic bottle, so the current Straus system is saving significant amounts of energy (while also providing better tasting milk). They have investigated plastic made from corn (polylactic acid, PLA), but rejected it because it is typically made with transgenic corn and offers few benefits when not composted properly (most landfills are amazingly inert places where nothing breaks down, neither paper, nor food, nor plant material).

Decades of innovation and striving have not quenched Straus’ enthusiasm. In the future, he hopes to expand the use of alternative energy on the farm; improve feed sourcing (buying local grains); improve the recyclability, re-usability, and sourcing of packaging (I would love to see them offer yogurt in reusable containers); experiment with different ingredients like agave nectar in their products; and continue to educate consumers and other producers about their practices.

The Straus farm and creamery is not normally open to the public, but offers periodic tours through the Marin Agricultural Land Trust (MALT).