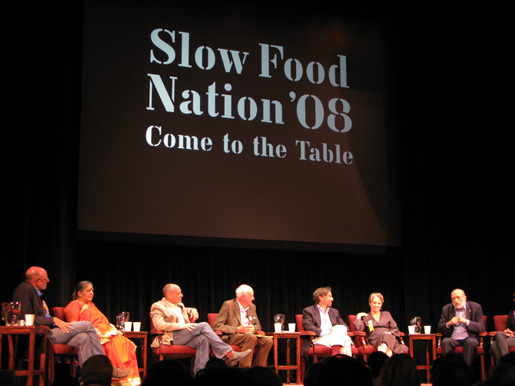 After two days of inspiring talks, I personally feel ready to take some action. Three great panels were packed with the world’s most important food policy thinkers, including farmer and essayist Wendell Berry, who rarely gives public talks, but has been one of the primary thinkers influencing the Slow Food movement in the U.S.

In the first panel, Climate Change and Food, moderator Mark Hertsgaard reminded us that scientists have determined that we are locked in to the next 20-30 years of climate change, even if we miraculously quit emitting carbon tomorrow. Carl Pope, Executive Director of the Sierra Club, delivered some fierce words, including that our government officials don’t know anything about food. He went on to say that climate change was no longer questioned, instead these officials are in profound denial about food’s relationship to other problems. Aaron Bernstein, MD, co-author of Sustaining Life with Eric Chivian, MD, agreed, saying climate change isn’t a scientific problem, but a political one. He hoped that the power of change was with children, who are growing up with this knowledge close at hand. Wes Jackson, Ph.D., author and President and Founder of The Land Institute, brought in a visual aid: a prairie grass sample with a long root structure, which naturally sequesters carbon. These grasses are disappearing. Following that, he worried that increased rainfall in the coming years would have extremely disastrous results for soils in the grain belt. He also gave a scary statistic: 22 year olds have lived through the burning of 54% of the world’s oil supply. Patrick Holden, Director of the Soil Association, told the story of how he realized his dairy farm couldn’t survive without oil, and so he went on a quest that led him to the idea of transition towns in Bristol, England, an effort to re-build community using green energy proposed in Rob Hopkins’ Transition Handbook. Anna Lappé, author and co-leader of the Small Planet Institute, talked about her recent trip to South Korea to take part in a meeting with Via Campesina, an international food sovereignty group, and being impressed when she saw 100,000 people there marching against American beef. She said that the U.S. needs to set the example for the world to follow. 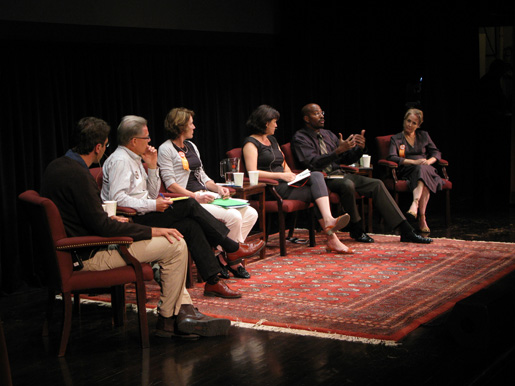 In the discussion about Edible Education, Alice Waters, founder of Slow Food Nation, international vice president of Slow Food, owner of Chez Panisse Restaurant and founder and president of the Chez Panisse Foundation, talked about including food in the curriculum, and how children feel compelled to be in nature. She urged politicians to say that food must be something we teach children, comparing the act to JFK’s move to include physical education in schools. Furthermore, she said, we must invest in schools so that they don’t have to make the choice between books and good food. Craig McNamara, President and Founder at Center for Land-Based Learning, spoke about the importance of re-establishing our relationship to nature, which he argued would affect the many other issues we face. Van Jones, Founder and President of Green For All, suggested that a green economy would “lift all boats” by its very nature. He went on to say that we can’t solve this by ourselves, that we need good governance. He also encouraged us to start with the most vulnerable populations, and that the rest of us would follow suit. Josh Viertel, Director of the Yale Sustainable Food Project, said that the sustainable food movement needs to tackle the structural barriers, like racism and class issues, that are necessary to consider going forward. He urged us to think of food as a universal right, not a privilege. Katrina Heron got a chuckle when she suggested that we bring together policy makers and feed them standard school lunch until the change policy. Anya Fernald, Executive Director of Slow Food Nation, talked about changing the context under which kids eat in the cafeteria, and rebuilding the human relationships surrounding food.

The final panel, Slow Food Nation, brought together the ideas presented throughout Food for Thought, and featured the leaders of the discussion surrounding food policy. Wendell Berry, farmer and essayist, said we’d been spared from local adaptation by our abundance of fossil fuels, but that it is necessary now to re-think that fact. He said that he feels hopeful that the cooperative spirit is coming back, and that community will have to be re-valued. He went on to say that he have lost faith in our political system, but that “if the right thing has a loud enough voice [the politicians] will do the right thing because they have to.” Eric Schlosser, journalist and author of Fast Food Nation, on the urging of moderator Corby Kummer, restated some of his thoughts on exploited workers in America, and summarized the insights from his panel the day before. He said that we must make changes here first, so that they can be followed by the rest of the world. Carlo Petrini, President of Slow Food, compared us to bees, which he reminded us are disappearing because of our pesticide usage, but said that like them, we need to “pollinate” through ideas. He connected this by talking about our interdependence with each other and with other species. He said that we must have respect for people who don’t have what we have, and that our food can’t be good if, for example, we disrespect Mexican workers in the U.S. Vandana Shiva, physicist, environmental activist and author, spoke about an Indian idea that “everything is food, everything else is something else’s food.” She called the situation we are in a “nutritional apartheid.” She said we have to integrate our issues, both ecological and social, and must extend our reach beyond the pursuit of pleasure with food. Michael Pollan, author of In Defense of Food and the John S. and James L. Knight Professor of Journalism at UC Berkeley’s Graduate School of Journalism, reminded us that the era of cheap food is over. Now, climate change, the price of oil, and energy issues cannot be discussed without politicians discussing food. Alice Waters encouraged us to go out into the street and demand change. She reminded us that we are a political force that must be reckoned with.

If you missed any of these great talks, they will be available next week, at www.FORA.tv.