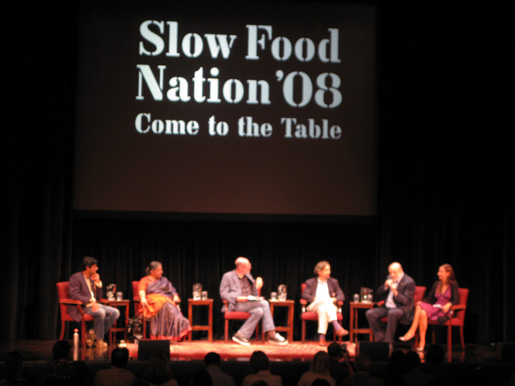 Slow Food Nation is under way, and the panelists at Food for Thought have jumped right in to the discussion of the issues our food system faces, and how to bring about change. Today’s panels discussed the world food crisis, building a new food system, re-localizing food, and the rights of farm workers. Throughout the day, there were many ideas that crossed paths.

In the first panel, The World Food Crisis got a definition: the result of food moving out of the hands of communities and into the hands of corporations. Vandana Shiva, physicist, environmental activist and author, went on to say that we should remain aware that the idea of crisis could be used as spin for a launching of genetically modified food, which has been argued to curb hunger. But she begged to differ. She said there was a myth that industrial agriculture produces more food. She said that in fact, in Punjab, India, fertilizers and pesticides have decreased fertility by 50% and killed 10% of the land, and in the process have made individuals rely on monocrops of rice instead of diverse foods. Carlo Petrini, President of Slow Food International, offered insights like eliminating subsidies, and redirecting revenue to young farmers just getting started and virtuous farmers who practice stewardship and organic agriculture. Corby Kummer, journalist and author of The Pleasures of Slow Food, talked about “virtuous globalization,” which seeks to support locally-based, fair choices for food purchased from outside the community. He also talked about Slow Food’s Ark of Taste, which helps preserve and maintain native food traditions. Raj Patel, author of Stuffed and Starved, talked about food sovereignty, and reminded us that seed saving should be legal. When it fails to be, Vandana Shiva called for us all, in situations where the law prevents such freedoms in farming, to disobey bad laws in order to follow higher laws. “Everyone of us [should] be the Rosa Parks of food,” she said.

Building a New Food System: Policy and Planning focused on the American food system. Andrew Kimbrell, founder and executive director of the Center for Food Safety, talked about organic as the beginning of change—not the “ceiling” but the foundation—on top of which we must consider building a humane, socially just, biodiverse and locally based framework. In building a better food system in America, it was important to consider breaking down the Farm Bill and working on its individual parts, said Marion Nestle, Paulette Goddard Professor, Department of Nutrition, Food Studies and Public Health, NYU. She also encouraged us to put endless pressure on public officials, and to be “paradigm warriors,” focusing on ecological truth and not just the will of the market in growing food. Secretary of the California Department of Food and Agriculture, AG Kawamura, said that getting it right in California could help get it right in the rest of the world, and Paula Jones, director of San Francisco Food Systems, talked about fighting pre-emption of locally effective laws, and creating an urban stake in the food system, through community gardens and backyard plots.

The panel on Re-localizing Food criticized efficiency as the sole means to consider in agricultural policy. Gary Nabhan, the founder of Renewing America’s Food Traditions (RAFT) Alliance, spoke of fossil food, and how we have no choice but to re-think our food pathways. Dan Barber, chef & co-owner of Blue Hill Restaurant and creative director of Stone Barns Center for Food and Agriculture, argued that though he often felt nostalgia for pre-industrial agriculture, there were ways to use technology virtuously. He described why he decided to build a slaughterhouse near his restaurant, saying that it encouraged transparency and that the meat was humanely gathered and tastes better than conventional options. Winona LaDuke, Native American activist, environmentalist, economist, author and founding director of White Earth Land Recovery Project (WELRP), feels that we’ve lost touch with nature and should decouple the food system from a cash economy. Author Michael Pollan proposed that one step could be encouraging government to re-regionalize local procurement for schools, military and other subsidized groups. In talking about the higher cost of local food, he added that it’s not that local food is expensive, but that industrial food is artificially cheap.

Part of the reason bad food is so cheap is because of worker exploitation. In the final panel today, A New, Fair Food System, moderator and author of Fast Food Nation Eric Schlosser said that without worker justice, the food system will never be sustainable. “We must include the workers at the table in the sustainable food movement,” he said. Jose Padilla, executive director of California Rural Legal Assistance, spoke of the many injustices of farm workers, including cruel working conditions such as excessive heat and sexual harassment. Farm worker Lucas Benitez, and Greg Asbed, representing the Coalition of Immokalee Workers, spoke about unfair wages, and the Immokalee Workers’ struggles to push large corporations like Subway, Chipotle, McDonalds and Burger King to the table in order to support better pay for field workers. Agustin Ramirez, ILWU Northern California Lead Organizer, discussed the California almond handlers and packagers’ struggles to earn a living wage, and the irony of some of the healthier foods being tied to the worst labor practices. Finally, Maricela Morales, representing CAUSE, the Central Coast Alliance United for A Sustainable Economy, encouraged the audience to get involved, by talking fair, demanding immigration reform, and the end of free trade as it is actually “forced” trade. She urged us to remember the power of human solidarity.

There are still a few tickets available to tomorrow’s sessions, so come out and hear more great talks at Food for Thought!