Tickets still remaining – Get them while you can! | Civil Eats

Tickets still remaining – Get them while you can! 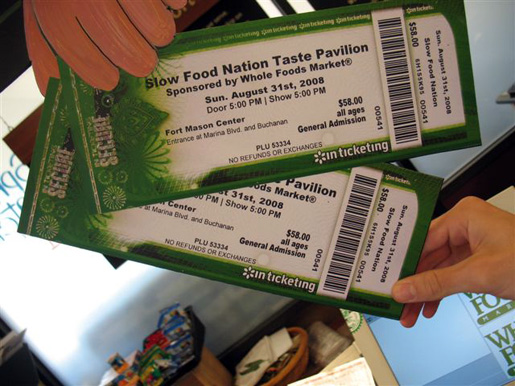 Slow Food Nation is just around the corner, and there are still some tickets available for great talks at Food for Thought.

We’ve given much thought to what we’d like to alter about our food system, but how do we implement the change? Come find out at Building a New Food System: Policy and Planning on Friday, August 29th from 12:00 – 1:30pm, featuring AG Kawamura, Secretary of the California Department of Food and Agriculture; Marion Nestle, Paulette Goddard Professor, Department of Nutrition, Food Studies and Public Health, NYU; and Andrew Kimbrell, Founder and Executive Director of the Center for Food Safety; Paula Jones, Director of San Francisco Food Systems; and moderator Timothy LaSalle, Executive Director of the Rodale Institute. Government policy at all levels can contribute to food systems that support the whole community. Learn from leaders in the field as they explore the first steps that governments—from municipal to state and beyond—can take to support and build a sustainable food system.

On Friday, August 29th from 3:00-4:30pm join Eric Schlosser, author of Fast Food Nation, who is moderating a panel entitled A New, Fair Food System that will focus on current conditions and the future potential for the millions of men and women who harvest and process the food we eat each day. Often people don’t give much thought about what it takes to bring our food from farm to plate. Activists who campaign on behalf of farm and meatpacking workers, including Lucas Benitez and Greg Asbed, representing the Coalition of Immokalee Workers; Jose Padilla, Executive Director, California Rural Legal Assistance; Agustin Ramirez, ILWU Northern California Lead Organizer; and Maricela Morales, representing CAUSE, the Central Coast Alliance United for A Sustainable Economy, will discuss how to create a system in which eating well and treating people right leads to success, sustainability and profitability for all.

Climate change is another major issue that both affects and stems from our current food system, yet it often gets overlooked in the discussion of our carbon footprint. On Saturday, August 30th from 12:00 – 1:30, find out how our food system and global warming are inextricably linked. Join Carl Pope, Executive Director of the Sierra Club; Wes Jackson, Ph.D., author and President and Founder of The Land Institute; Aaron (Ari) Bernstein, MD, co-author of Sustaining Life with Eric Chivian, MD; Patrick Holden, Director of the Soil Association; Anna Lappé, author and co-leader of the Small Planet Institute and moderator Mark Hertsgaard, journalist and author of the forthcoming Living Through the Storm: Our Future Under Global Warming at Climate Change and Food. The discussion will focus on future food production and the importance of land stewardship, biodiversity, urban planning and will address how consumers and policy makers alike can mediate climate change through how we eat.

And finally, come and watch Slow Food on Film, Saturday, August 30th from 7:45-10pm, a special screening of award-winning short films and documentaries that promote a new critical awareness of food culture selected by Slow Food on Film and the International Festival of Cinema and Food. Featured films include Along Came the Rain, a film that discusses the conflict between local culture and standardized ways of life, Silent Snow, the story of two young girls in an isolated and unfamiliar land to shed light on a powerful story of global significance, The Price of Sugar, which documents the exploitation of Haitian plantation workers, and Cry Sea, a film that deals with the issues surrounding fishing in Africa. The event will be hosted by Alice Waters and Dieter Kosslick, Director of the Berlin International Film Festival.

Get your tickets now online, and join us for these great talks, beginning this Friday.