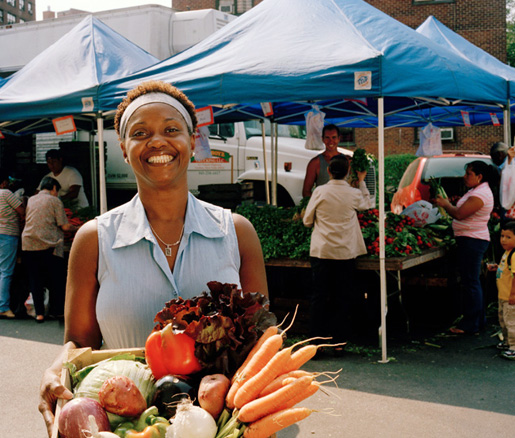 You would be hard pressed to find a place where the divide between the “haves” and “have nots” is more sharply defined than Manhattan’s Eastside. The gap between rich and poor is not just evident in the number of nannies pushing Hummer-like baby strollers south of 96th Street, but more harshly revealed by disparities in the area’s health statistics. North of 96th, specifically in East Harlem where the population is 56 percent Hispanic and 33 percent African-American, 31 percent of the people are obese and 20 percent are diabetic. Cross the line south into the land of the healthy, wealthy, and thin, where 84 percent of the folks are white, the obesity rate plunges to 7 percent and diabetes barely brushes 1 percent.

“We have lots of diabetes, hypertension, and poverty in East Harlem. The food here is for the most part mostly carbs and sugar, and you won’t find much in the way of whole grains or fresh fruits and vegetables.” This is how Maritza Wellington-Owens sizes up the food environment where she lives. As a woman of Cuban-African ancestry, she’s been taking on the food desert in her own backyard for the better part of 15 years by starting farmers’ markets and school-based farm stands. She acknowledges that when it comes to food and health, hers is a sick community, but one big part of the cure, in her estimation, is making affordable food from upstate farmers available to her neighbors.

I can remember the place where Maritza organized her first farmers’ market. More to the point, I can remember the way I felt that winter in 1993 when I first saw the site she had in mind. It was bordered on the north side by several twenty-story public housing towers, whose Soviet-era exteriors and littered grounds were dramatic emblems of urban decay. On the south side of the site ran several blocks of battered storefronts that alternated between boarded up, iron gated, and barely open. Gazing at this inhospitable landscape I asked her how she expected to find any farmers in their right mind that would come here. But Maritza had more faith in the neighborhood than I did, and with hard work, much cajoling of farmers, and $10,000 in New York State Farmers Market Nutrition Program coupons distributed to lower income WIC moms, her first farmers’ market was a success.

Up until recently, New York City’s GreenMarkets, the icon of the modern day farmers’ market movement, wouldn’t go into the kind of places that Maritza has always eyed with enthusiasm. For them the farmers came first, which meant that a farmers’ market had to survive exclusively on its own terms. The more affluent the shoppers, the more successful the market, which left a yawning gap in neighborhoods like East Harlem and the South Bronx.

“Affluent communities don’t need me,” said Maritza, “It’s where there’s little access to good food that I like to go.” So under the auspices of Harvest Home, the non-profit organization she founded, Maritza currently manages nine farmers’ market and two youth-run, school-based farm stands that sell local produce to the schools’ faculty, parents, and neighbors. She relies on a regular group of 20 farmers as well as a fishmonger and baker to keep the markets and stands stocked. “I tell my farmers this isn’t the Union Square Farmers’ Market where they can get $4 per pound for organic tomatoes,” said Maritza, “but if they price their products right, they can do well.”

One key to her success has been the partnerships with community groups, state agencies, and hospitals. She makes ready use of the WIC and Senior Farmers Market Nutrition Program coupons issued by the New York State Department of Agriculture. With a grant from the Friedman Foundation she has installed EBT machines at farmers’ markets so that food stamp recipients can also buy fresh local produce. And two Bronx hospitals are sponsoring her nearby farmers’ markets with weekly email alerts to their staff, the distribution of logo-emblazoned mesh bags, and nutrition education activities at the markets.

“I work mostly in minority neighborhoods where food access is a problem,” Maritza tells me. “I do this work because it’s needed and because I see how happy people are at a farmers’ market.”