From the Ark: Bronx Grapes 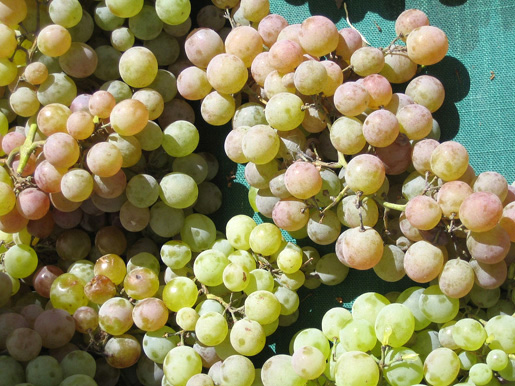 Taste buds primed for Slow Food Nation’s pavilions have another reason to rejoice about being in the Bay Area just as August melds into September.

This is the only time of the year that the rare and delicious Bronx grape — one of Slow Food USA’s Ark of Taste foods — is ripe for sampling.

The Bay Area is one of the few places in the country where you can try, and buy, these tiny grapes, which are a cross between slip-skin, seedy Concord grapes and Thompson seedless. The cross didn’t quite get rid of all the seeds, but it created a delicate grape with musky, rich, sweet taste of a Concord and the light, silken flesh of the Thompson. Any seeds are tiny, soft and easy to eat.

John Lagier, an almond grower in the Central Valley near Escalon, managed to snag a few Bronx grape cuttings from another farmer some 15 years ago, and he’ll be stationed in Slow Food Nation’s Civic Center marketplace on Saturday — as well as helping run his usual stands at San Francisco’s Ferry Plaza Farmers Market and Oakland’s Grand Lake market. (On Sunday, he and his grapes, and other products, will also be at the Marin Farmers Market in San Rafael and the Temescal market in Oakland.)

The buzz has been on about Bronx grapes for the last several years, but they’re still hard to find. Nigel Walker at New York State Agricultural Experiment Station in 1931. The grape took its name a few years later from the home borough of the New York Botanical Gardens, which was a partner in the station.

At first glance, these grapes might make you wonder why people will pay $4 a pound for them (Lagier’s price, at the SFN Marketplace and farmers markets). They’re small, and their amber skins often have an ashy Iook. Don’t be deterred. Inside, they both dazzle and seduce — their flavor is rich and sweet but not too, like a good Muscat wine.

Bronx grapes are one of four varieties of grapes on Slow Food’s U.S. Ark of Taste, which exists to showcase endangered foods that have become rare. The idea of the Ark is to cultivate consumer demand — and tasting is where it all starts. See you round the Marketplace this weekend. I’ll be lurking near the Lagier Ranches stand.

Carol Ness is a longtime Bay Area journalist who has written about — and eaten her way through — the good food movement as it has bloomed and begun to yield fruit. She was a contributor to “Come to the Table” and her work is most often seen in the San Francisco Chronicle.

Photo by In Praise of Sardines