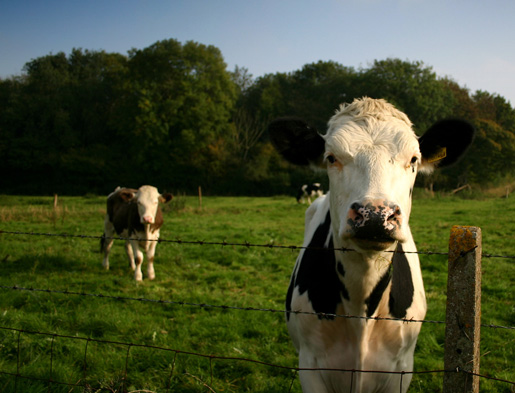 Anyone who has had the pleasure of reading Michael Pollan’s The Omnivore’s Dilemma is familiar with Joel Salatin, a self-described “grass farmer” and owner of Polyface Farm in Virginia. The end product of Salatin’s farm is meat (and eggs), but the production process bears little resemblance to the standard American livestock ranch. Salatin’s cattle rotate between “salad bars”—pastureland with an unusually high level of plant diversity—leaving in their wake a field of manure that Salatin’s chickens and turkeys then make their way through, turning droppings into compost with their beaks and claws. Pigs nudge past in the chickens’ footsteps, aerating the soil with their snouts and hooves. This inter-species cooperation keeps Polyface pastures in a state of continuous, rich regrowth, and makes for delicious, naturally-raised beef and poultry.

I was fortunate to see Joel Salatin speak in Marin last winter. The presentation was organized by my favorite meat producer, Marin Sun Farms, to benefit The Point Reyes Seashore Ranchers Association. The event fell on a particularly stormy night in Marin County, and the group of us who braved the rain to hear Salatin arrived at the Marin Civic Center to find the power out, but the evening’s hosts unruffled. We feasted in the dark on Rocky Mountain oysters, roasted beet and goat cheese salad, and spare ribs, and were treated to a presentation by Salatin so inspiring and engaging that I forgot all about the weather. 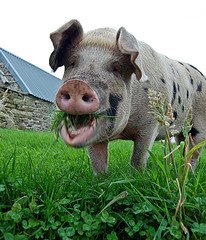 Salatin’s dedication and love for his animals, the land, and his customers is apparent in his every word. He describes the structure of Polyface and the role of each animal in the operation’s success with incredible zeal and deep understanding. Without a trace of pesticides or a kernal of industrial feed, he runs a business that rivals many commercial ranches. But despite what seems like potential for massive growth, Salatin remains dedicated to keeping his operation hyper-local, selling his goods only to consumers in the Virginia and Maryland region (and managing to keep the prices reasonable).

He is forthright in his disdain for the centralized American food system, as well as what he perceives as a compromising federal organic standard that now favors large industrial producers who can’t achieve the level of care or quality that a small farm can. At the end of the day, though, Salatin’s message is not a criticism of government or agribusiness so much as it is a moving and compelling story of family farm now in its third generation. It is also evidence of the fact that nature, when allowed to function without intervention, is a supportive and successful system of farming unto itself.

We are fortunate to have Joel Salatin returning to the Bay Area for a special presentation at Slow Food Nation. Please join Slow Food Madera on Monday, September 1 from 2:00 – 4:00 pm for an afternoon with Joel Salatin and Jerry Brunetti, an authority on the correlations between soil, plant, animal, and human nutrition.