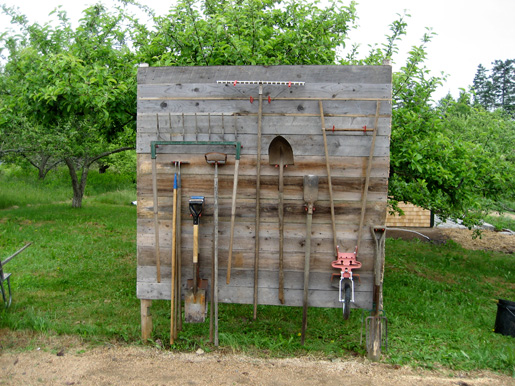 This is a story that begins down the road from the Nearing’s Good Life Center in Harborside, Maine, and ends in the San Francisco Bay Area. In 1954, Scott and Helen Nearing published Living the Good Life: How to Live Sanely and Simply in a Troubled World, which delves into the politics, economy, and pragmatic lessons of their 20th Century homesteading. It became a veritable bible for America’s “Back to the Land” movement in the late 1960s. Today, the Good Life Center (the Nearings’ final homestead) stands as a living museum of this lifestyle. In 2007, my girlfriend and I found ourselves apprenticing at a lovely farm a quarter mile from the Center.

We were working for farmer and author Eliot Coleman, who had made his own pilgrimmage to the Nearings’ farm in the 1960s. Eliot is something of a Scott Nearing protégé; his picturesque Four Season Farm operates on the back half of the Nearings’ farm, which they sold him at the same price they had bought it for: 33 dollars an acre. Both Farm and Center are perched on a cape that juts into the Atlantic, giving this off-the-grid neighborhood an “end of the earth” type beauty. The experience, for us, was like a tutorial in a homesteading lifestyle: root cellars housed apples, beets, and homemade sauerkraut; household gardens grew with the size and diversity of small farms; 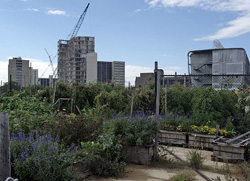 the homes were hand-built by their owners; and a tradition of bi-weekly, neighborhood saunas still endured from an era when running water wasn’t available for bathing. Eating seasonally wasn’t a matter of intention, but of common sense.

I asked Eliot once what he would do if he were my age today. I was interested to know how a successful back-to-the-land-er from the 70s might navigate the combination of today’s dizzying land values and the burgeoning popularity of local food. His answer: since so much good land is already taken, find a way to farm it for the landowners. Give them a box of veggies every week, and earn your living off the rest. The new “Back to the Land” would be a sort of … well, not “indentured servitude” … but maybe a foodie-esque, Carhartt-toting, symbiotic spin-off of the concept.

My girlfriend Emily and I were both raised in cities. I’m writing this from Berkeley, California, where we moved at the conclusion of our Maine apprenticeship. It feels as though we’ve been thrown like a boomerang from our metropolitan nuclei, out to the end of the earth, and now we’re back. We felt more useful bringing our farming knowledge home, so to speak, to a city, to explore the uncharted horizons of urban self-reliance. We have a vision of dozens of Good Life Centers springing up in areas of clustered housing, challenging the notion that living simply and sustainably requires geographic remoteness. We’re inspired by black and white photos of American kitchen gardens from the 1930s and 40s – the insurance salesman cultivating lettuces in his undershirt, the military wife harvesting tomatoes along the driveway…

Setting up kitchen gardens in concise and sometimes unorthodox ways to deal with the contours of backyards and apartment roofs is a re-emerging art. Lacto-fermenting vegetables into sauerkrauts, kim chees, and pickles has become a (much healthier) urban-foodie translation of putting up cans of dilly beans for the winter. The Nearings’ legacy of resourceful, frugal, and purposeful living does inform our urban lifestyles, and we can create networks and forums for 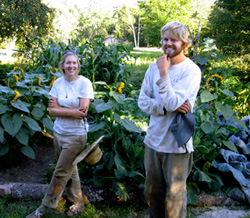 unprecedented urban homesteading cooperation. Emily and I have not taken Eliot’s advice completely literally, but its spirit remains intact. Instead of growing for landowners, we’re helping them grow for themselves. America’s open-armed reception of residential farm figures like Michael Pollan, Rosalind Creasy, Fritz Haeg, and Amy Franceschini suggests that today’s transformative movement may be more of a Back to the Yard.

Jeremy Oldfield lives in Berkeley, California. He and Emily founded the Freelance Farmers this past spring, an operation that installs residential kitchen gardens and uses them as living classrooms in the art of urban homesteading. www.freelancefarmers.com Read more >