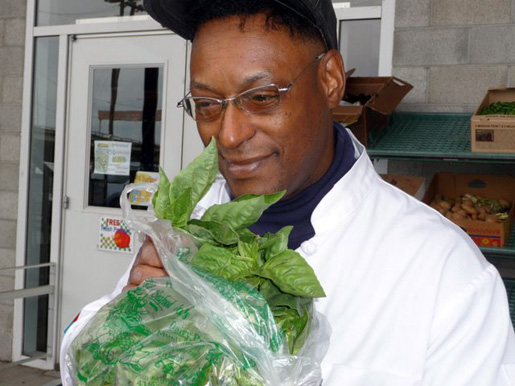 Chef Calvin Blake holds the huge, deep green, red-veined leaves up to his nose and breathes in their pungent, sassy aroma. “That smells so good—so fresh!” he exclaims, adding the bags of Giant Red Mustard leaves to his cart. “These are going to be great in salads.”

Calvin isn’t shopping for one of San Francisco’s renowned restaurants, but for the Salvation Army Meals Program, which operates meal sites and delivers hot lunches to people who are homebound.

He isn’t shopping at a restaurant wholesaler, either; he’s at the San Francisco Food Bank, which has just started receiving the yield from Slow Food Nation’s Victory Garden. 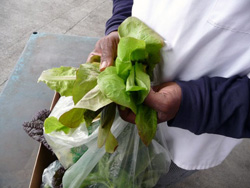 “It’s great that this was grown right here in San Francisco,” Calvin says when he learns of the produce’s origins.

Leafy greens are harvested on Monday mornings by Victory Garden volunteers, then picked up by a Food Bank truck as it makes its rounds collecting and delivering food. The produce travels to the Food Bank’s warehouse, where it’s made available to more than 600 agencies that rely on Food Bank supplies to serve San Francisco’s 150,000 hungry citizens.

For a city that seems to overflow with good food, hunger is actually a serious problem here—1 in 4 children, 1 in 3 seniors, and 1 in 5 adults are unsure of where their next meal will come from. Every day, the San Francisco Food Bank sources, collects, sorts, inspects and repackages thousands of pounds of food, then distributes it to soup kitchens, senior centers, school programs and nearly 200 grocery pantries throughout the city. Thanks to Chef Calvin’s keen eye for greens, his clients are the lucky ones who get this week’s Victory Garden bounty. He already has plans for the spicy leaves. “I’m going to slice it thin, like for slaw, and mix it with other salad greens,” he says, adding, “I love being able to work with fresh produce.” 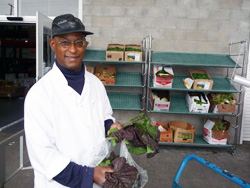 He stacks six cases of fresh bell peppers on his cart. These aren’t from the Victory Garden, however (the pepper harvest is a few weeks away); they are the result of an innovative program called Farm to Family, which enabled the San Francisco Food Bank to distribute 15 million pounds of fresh produce last year to low-income families.

California food banks work with growers and packers to collect surplus crops and culls—blemished or off-sized items that don’t meet grocery store standards, but still taste just fine. That means people who couldn’t dream of affording, say, a fresh orange, might actually get to enjoy one. It also means that food which might otherwise go to waste becomes an important part of the food system.

Calvin says that many clients served by the Salvation Army program are homebound Seniors. “I send out meals to about 120 people in their homes,” he explains, “I don’t want to just feed people; I want them to enjoy what they eat. Produce like this really makes a difference.”

Thanks to the generous donations from individuals, companies and groups like Slow Food, the 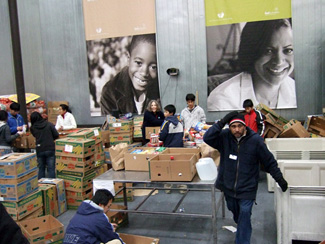 San Francisco Food Bank was able to distribute 31 million pounds of food to the hungry last year—enough for 66,000 meals every day. To learn more or arrange for a tour, visit www.SFFoodBank.org.