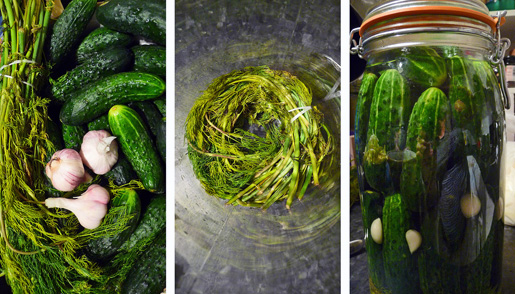 Pickling and fermentation were probably invented out of necessity, as pre-industrial societies needed ways to preserve the harvest and provide sustenance through the winter. In more recent times, pickling and fermentation have become ways to create new flavors, enliven a meal, eat locally throughout the year, or improve the nutritional value and digestibility of a set of ingredients. Recent feature articles in the food sections of the San Francisco Chronicle and Los Angeles Times point to a new popularity for pickles in restaurants and home kitchens.

At the Slow Food Nation pickle and chutney pavilion, visitors will be able to take a tour of the world’s pickles and chutneys, with some of the expected offerings to be Japanese pickles like kazu-zuke, pickled figs from Alabama, American regional sauerkrauts, bread and butter pickles, and sun-cured lemon pickles.

To get some more insights into pickles and chutneys, I asked Michelle Fuerst, the “pickle curator”*, a few questions.

Marc: What initially drew you to pickles and chutney? 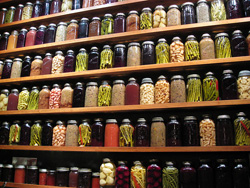 fermented foods! What do you do when you have too many vegetables or found a great deal at the market? Pickles! This could develop into a cheer!

Simply put, pickles are the answer to many of the world’s problems.

Marc: How do you see pickles and chutney fitting into the Slow Food philosophy?

Michelle: I just might be able to start my own movement and philosophy based on pickles and chutney. Pickles and Chutney demand that you engage with your food. Pickles say, “Pay Attention!” If you make them, you have to pay attention to quality of the vegetable, cleanliness of your kitchen and the storage temperature. Some methods even require daily tending. If you eat them, they can be very assertive like an Indian style pickled lime or subtle like some Japanese pickles. With either a shout or a whisper, pickles demand to be noticed.

Pickles also have bigger implications: they allow you to eat locally all year long by preserving the bounty of the season, and they express regional preferences and food traditions. They connect you with people and traditions across economic and cultural lines. Most people have one story of a relative who made pickles or at least a vestige of a family recipe. I have started many of a conversation with, “What kind of pickles are part of your culture or tradition?”

Marc: What was the process for finding the “exhibits” for the pavilion?

Michelle: My philosophy was simple: choose pickles and chutneys that could be made by the home cook. Then, I thought I would write every farmer’s market in the country. This did not happen. However, I did find out that there are thousands of farmer’s markets all over the U.S. So, the next, more manageable thing I did was to write to each Edible Communities magazine across the country and ask for recommendations. I also asked other picklers for their suggestions and spent a lot of time on the internet. I talked about pickles to a lot of different people, probably to the annoyance of those who are regularly and frequently in my company. 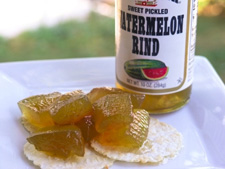 Marc: What are some of the most unusual things that you have pickled or fermented?

Michelle: Earlier this summer, when friends were making nocino [a green-walnut liqueur], I got a Victorian recipe for pickled green walnuts. I really love the idea that pickling food can take something initially inedible and transform it into something delicious. Just think of pickled watermelon rinds!

Marc: What are some lesser known pickles that you think people should seek out?

Michelle: Basically, I want people to think beyond the cucumber and beyond just hot water canning. I do however celebrate those methods.

Marc: Will we be seeing any collaborations between pavilions, like a chutney-containing cocktail or kimchee-stuffed naan bread?

Michelle: The Bread pavilion will be making fresh corn bread and the Charcuterie pavilion has a line on a ham from Virginia for a delicious snack of corn bread, country ham and relish. Charcuterie is also getting a batch of spiced muscadines from South Carolina from our pavilion.

Marc: Finally, if the Top Chef producers called and wanted your advice on setting up a cooking challenge based on pickles and chutney, what would you tell them?

Michelle: I would ask them to create a challenge that would not only be entertaining but useful for the viewers at home. I would ask each challenger to not just make a pickle or chutney but to create an entree or dinner that featured their creation. Basically, make the pickle or chutney and then incorporate it into a delicious meal. They could create a menu from appetizer to dessert which features pickled products. Perhaps they could even make pickles or chutneys that use different methods, i.e., not just vinegar pickles! 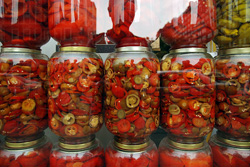 * Although the title “pickle curator” sounds unique, Michelle is possibly not the only pickle curator in the world, as there is a kim chee museum in Seoul, South Korea, a gherkin museum in Lehde, Germany, and a “pickle wing” at the New York Food Museum.