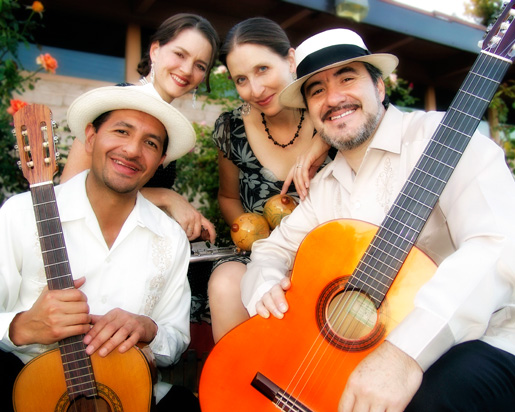 Cascada de Flores is a local Bay Area band that celebrates the diverse traditions of Latin American music and dance. Mexican and Cuban cultures are two examples of how very different cultures evolved. The indigenous relationship with the land, the sounds and flavors brought by the Europeans and the influence of the African diaspora resulted in unique expressions of music, food, language and religion.

Mexican “Son” is a fusion of indigenous, Spanish and African traditions, and varies from region to region both in instrumentation and rhythm. Cuban “Son”, on the other hand, is considered the first truly homegrown Afro-Cuban musical style and it’s heavily based on rhythmic African tradition.

Cascada de Flores has studied and refined its performance of different styles of music. Their repertoire includes Son Jarocho, a particular style from southern Veracruz characterized by humorous verses and subjects such as love, nature, sailors, and cattle breeding. They also perform Canción Ranchera, considered to be the music of the Mexican pueblo, the rural working class, and Zapateado, a percussive dance on a wooden board.

During Slow Food Nation, Cascada de Flores will be performing at the Soap Box area next to the Victory Garden at Civic Center Plaza. A detail schedule of the Slow Arts program will be published in August on the Slow Food Nation website.