"How We Eat": A Series at the Commonwealth Club | Civil Eats

“How We Eat”: A Series at the Commonwealth Club 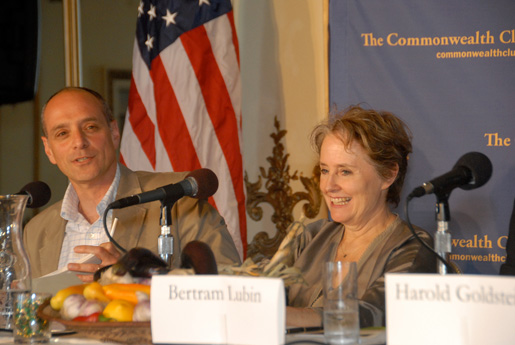 San Francisco is fortunate to be home to the Commonwealth Club, one of the oldest and largest public affairs forums in the country. With members of all ages and backgrounds, the Commonwealth Club has set the stage for civic engagement across the Bay Area since 1903. Slow Food Nation is thrilled to partner with them for an outstanding series of panels and conversations leading up to the main event over Labor Day weekend.

For the Month of August, the Commonwealth Club is hosting a “How We Eat” speaker series, hands-on classes, tastings, field trips and dining opportunities. Their intention is to bring greater attention to food and diet as the cornerstone of all cultures. Their platform: “For decades, the U.S. food system has been epitomized by industrialization, high productivity, convenience, innovation and high profits. But as diet-related disease, energy-related food shortages and natural-resource depletion became growing concerns, critics have fought back, emphasizing health, taste and food’s source and production methods.”

The series got off to a great start last Thursday, July 31, with a panel featuring Slow Food Nation founder Alice Waters; Anya Fernald, Executive Director of Slow Food Nation; Harold Goldstein, Executive Director of the California Center for Public Health Advocacy; and Bertram Lubin, M.D., President of Children’s Hospital Oakland Research Institute. The sold-out panel was held at the Fairmont Hotel and was moderated by Eric Schlosser, Investigative Reporter and Author of Fast Food Nation. A video and transcript from the event can be found here.

The conversation focused on food and its intersection with health, agriculture, education and policy. Panelists discussed the importance of educating children about sustainability and making connections between food, health and the environment. Schlosser began the conversation by asking Dr. Lubin to set the stage for the current diet-related health crisis in this country. Dr. Lubin talked about the rates of obesity and diabetes among young people today, noting that the National Center for Health Statistics indicates 16% of children aged 6-9 are overweight, up 45% from 1988-1994, and double from 1976-1980. He cited an oft-stated, but nonetheless stunning figure: For the first time in our nation’s history, the average life expectancy of today’s children may actually be shortened by 2-5 years due to obesity-related health problems (NEJM). His message was one of employing easy preventative measures to ensure that the future generation has access to good food and exercise. 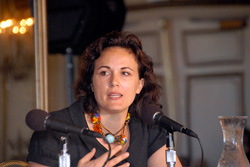 Goldstein underscored the disconnect between the industrialized food industry and our current public policy, citing the statewide efforts to require menu labeling at California fast food restaurants. Bringing out a fine-print menu brochure from Jack in the Box, he challenged the fast food industry to take a stronger stand on labeling ingredients and calories in a clearer and more meaningful manner. He also talked about the need to bring good, safe and affordable food into low-income neighborhoods and encouraged each one of us to become involved, take action and urge our lawmakers for better food policy across the board.

Fernald shared with the audience her experiences traveling the world, and engaging with other cultures in their food traditions. She told of her travels to northern Sweden, where she learned from the Sami people, who traditionally herd reindeer, and who shared with her their stories, dance and music (and a lot of reindeer meat, too). Fernald also addressed the claim that Slow Food is for the elite, noting that the movement is about bringing people back to the origin of their food. She said that is not just about spending money, but more about giving thought, care and time to food. She told the crowd that Slow Food Nation will bring the message that good food is a universal right and not a privilege.

When asked by Schlosser what her version of a good fast food restaurant would look like, Waters, who champions edible schoolyards and good nutrition for all students, said, “A big garden, a big bottle of olive oil… and then you tell people, ‘Go out side and graze!’” She shared with the audience her experiences of supporting local farmers in California and connecting food and farms to schoolchildren across the country. She envisions a future where there is a vegetable garden on the White House lawn, and where the next president of the United States stands up for edible education as a core curriculum in every school.

The next event in the series takes place tonight, Wednesday, August 6. Please join us on at the Commonwealth Club for “Eating the Right Way,” a panel discussion presented in association with Slow Food Nation. Panelists include Kevin Lunny, Owner of Drakes Bay Oyster Company; Jessica Prentice, author of Full Moon Feast and co-owner of Three Stone Hearth Community Supported Kitchen; and Helene York, Director of Bon Appetit Management Company Foundation. I will moderate the panel and welcome you to the first of our three panels during this month. Discounted tickets for this panel are available for Slow Food members. For more information, check here. Purchase tickets at commonwealthclub.org or call 415.597.6705.