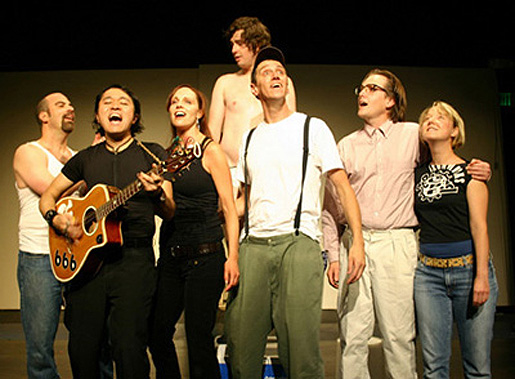 During Slow Food Nation on Labor Day weekend, Uncle Buzzy’s Hometown Theatre will be volunteering their performance at the Soap Box area and other surprise appearances near the Marketplace and the Victory Garden.

Uncle Buzzy’s character, based on the group’s leader Michael Sommers, is a transplanted small town farmer from Vermont who moved to the city. The group is a comedy theatre dealing with issues of lost community and the feeling out of place in a modern, industrialized society.

Michael says the group wants to “bring small town entertainment to the big city” with short acts of street theatre, adapted and original music and a variety of comedy sketches customized for every particular audience. The group tends to improvise and localize its pieces because they want to “provide entertainment that has to do with local issues and local people,” as opposed to the normalized models promoted by big industries such as mainstream movies and music.

One of the group pieces is Uncle Buzzy’s story, from the moment when he’s tricked out of his farm by a corporate conglomerate, to his work as a “spokeschicken” on an industrial chicken processing plant, to culminate with “the world greatest chicken impression”. Another piece, “The bananas,” tells the story of two Chiquita bananas trying to convince a local heirloom banana to lose the splotches and straighten out its curve in order to fit into the bunch. Make sure you don’t miss the fun and be prepared to join a sing-a-long of the “Pig Song” and “The list of the Omnivore’s Dilemma”

A detail schedule of the Slow Arts program will be published in August on the Slow Food Nation website.