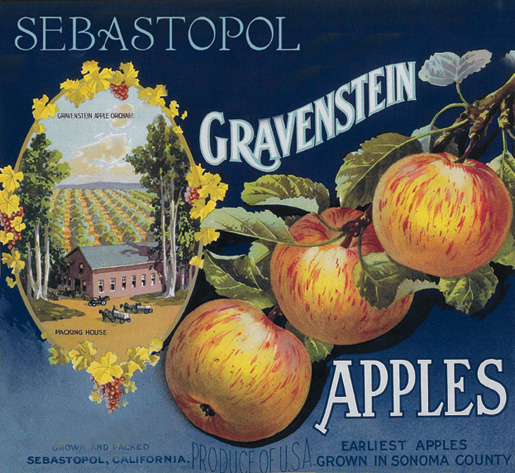 Before the dawn of industrial agriculture, we had thousands of varieties of vegetables and fruits. Today, we see only a small fraction of that variety: red delicious apples, iceberg lettuce, beefsteak tomatoes. According to the Slow Food Foundation for Biodiversity, 75 percent of European food product diversity has been lost since 1900 and during that same period, 93 percent of American food product diversity has been lost. In the last century, 30,000 vegetable varieties have become extinct and one more is lost every six hours.

Part of Slow Food International’s mission is to protect our world’s agricultural diversity through its Ark of Taste, a catalog of endangered foods that have fallen into disuse. The program’s mission is to celebrate these varietals and reintroduce them to the public, in hopes of preserving the unique diversity of our agricultural landscape.

We are lucky in the Bay Area to have the Gravenstein Apple, one of our local symbols of ongoing biodiversity in an apple supply dominated by the often-mealy Red Delicious and sometimes-sour Granny Smith. According to Fatal Harvest: The Tragedy of Industrial Agriculture, the United States has lost nearly 86 percent of apple varieties—over 6,000 different kinds—since 1903, but the Gravenstein has managed to survive. An historical agricultural tradition in Sonoma County since 1811, the Gravenstein was originally planted by Russian trappers and was one of the first apples to be ready for market. The Gravenstein is known for its versatility as an ingredient in pies and sauces and a great-tasting snack on its own.

The month of August is Gravenstein Apple month and Slow Food is kicking it off with a celebration. In a continued the effort to protect this local culinary heritage through the pleasure of taste, The Culinary Underground presents the Sebastopol Gravenstein Apple Slow Dinner 2008 under the apple trees at Nana Mae’s Organic Bollinger Lane orchard. Join us on Sunday, August 23 at 4:00pm for a grand feast, which highlights the sweet and tart flavors of this local favorite.

You will be greeted with an autumn apple, the artisanal cocktail from bar chef, Scott Beattie, from Cyrus Restaurant in Healdsburg and author of Artisanal Cocktails – Drinks Inspired By The Seasons. Chef and farmer Doug Nicosia of Sensuous Farms will begin his grand feast with hors d’oeuvres: cold apple soup shot, spicy scallop crudo on apple slices, apple conserve, walnuts and Point Reyes blu cream on a pastry puff, rosemary apple confit over applewood smoked pork belly on a mini corncake and tomato carpaccio with apple cider vinegar. The main course will include apple-cured duck leg confit and cured, apple smoked and seared duck breast over torn pasta in an apple cream sauce with carrot puree, flashed shitakes and an apple gastrique. The grand finale will be an apple polenta cake with caramel ice cream and an apple bourbon sauce.

As we head into autumn and the height of apple season, remember to look for heritage varieties—not only will you be preserving biodiversity, you’ll discover an incredible range of flavor and texture beyond what the industrial standards can offer.

Tickets: $160 ($140 for Slow Food Members) can be purchased at The Cheese Shop Healdsburg or by calling, 707.433.4998. The ticket price includes dinner, cocktail, wines, service and parking. All proceeds benefit the Slow Food Gravenstein Apple Presidia Project.