A Seedy Campaign In The Name Of Good Taste | Civil Eats

A Seedy Campaign In The Name Of Good Taste

There’s an awful lot of b.s. being spread in this election year–thankfully, some of it’s actually being put to good use growing delicious, nutritious fruits and vegetables. The rising cost of food and gas is fueling a grassroots movement to uproot our grass and grow our own food instead. Once, throwing tomatoes was a form of protest. Now, growing tomatoes is the way to just say no to the status quo. Isn’t that a sad sign of the times?

If only we had a commander-in-chief who called on us to grow our own crops, instead of to shop! It sounds implausible now, but there was a time when our government actually encouraged us to get off our cans and get canning. The current administration is famously reluctant to encourage preserving of any kind, be it sweet or savory.

A couple of generations ago, our government championed home food gardening as a civic duty, a way for average Americans to help ease the food shortages we suffered during World War II. And the campaign worked; in 1943, we managed to grow 40 percent of the vegetables we ate in the U.S.

Our nation’s last energy crisis drove us into the dirt, too; in 1975, “49 percent of U.S. households were growing vegetables,” as Bruce Butterfield, the National Gardening Association’s market research director, told the Washington Post recently.

So as our current war drags on and gas prices rise, it’s no surprise that Americans are once again flocking to their local garden centers, snapping up seedlings, and supplanting Bermuda grass with Bermuda onions. But this time, we’re doing it without the inducement of any pro-produce propaganda from the White House. The folks at the helm of our sinking economy are too busy backing the lenders to rally the back-to-the-landers. 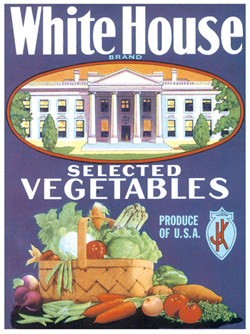 The call to tear out your turf and grow turnips comes, instead, from humble homegrown heroes like Roger Doiron, founder of Kitchen Gardeners International and the creative force–and face–of the Eat The View campaign to launch a new generation of Victory Gardens, starting with the White House lawn (see Roger’s latest YouTube opus, This Lawn is Your Lawn, at the top of this post.)

Alice Waters famously tried to persuade President Clinton to install a kitchen garden and compost pile on the White House grounds. If only she had succeeded–the Clinton legacy might be burnished with black gold instead of tarnished by dirt. But Waters, undaunted, continues to spearhead–along with Doiron and a small army of trowel-wielding terroirists –a visionary agrarian platform I call YIMBY-ism; the Yes, In My Back Yard! movement. Waters has helped created a stellar example in her own backyard by marshalling the forces that recently transformed the lawn in front of San Francisco’s City Hall into the Slow Food Nation Victory Garden. It’s a blueprint for greener grounds all around us, and a recipe for true energy independence. Calories, after all, are just another unit of energy. Grow your own, and you’re on the road to self-sufficiency. The Path to Freedom lies through the garden. So let’s get this presidential campaign out of the gutter and into the dirt!