Down and dirty | Civil Eats 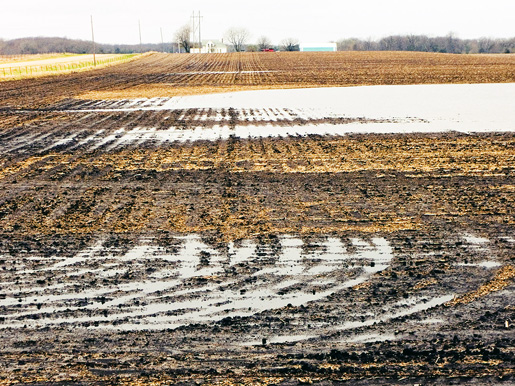 All human life — all terrestrial life, in fact — relies on that thin, fragile layer of topsoil that covers much of the non-oceanic earth. In a large sense, human societies rise and fall, thrive and decline, based on how well they nourish their topsoil. I’m not a huge fan of Jared Diamond, but his book Collapse: How Societies Choose to Fail or Succeed teases out an important lesson: burning through your share of topsoil leads to catastrophe.

Yet in post-industrial (that is to say, post-agricultural) society, our links to the land that sustains us have become so stretched, so abstract, that people have largely forgotten about the importance of soil. I see this most graphically in our political class’ euphoric embrace of ethanol — an allegedly “renewable” fuel that’s based on corn, our most soil-depleting crop.

Recent events in the Midwest, one of the globe’s greatest natural stores of topsoil, may yet force us to come to terms with the ground beneath our feet. Coverage of the early-summer floods that hammered the Corn Belt understandably focused on displaced people and ruined crops. But as this Associated Press article makes clear, the storms also washed away untold tons of fertile topsoil.

With the growing season going full bore and with some fields in Illinois still under water, it’s still impossible to know just how much topsoil the Midwest surrendered. Early indications aren’t encouraging. The AP reporter visited one Indiana corn farmer whose fields lie near the White River. Flooding became so powerful that the river’s overflow cut a “a channel with steep 12-foot banks at the edge” right into his cornfield. Such devastation evidently permeates Indiana. “Silt is piled up like sand dunes and uprooted trees still litter cornfields more than a month after the floods,” AP reports. 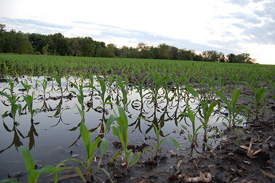 “It takes thousands of years to form one inch of topsoil,” an Indiana official told the AP. “Within a day, we lost it. It’s just devastating.”

The AP story effectively illustrates the storms’ effect on topsoil, but it doesn’t dig in to find the root cause: human-engineered changes in the land. In short, the practice of subjecting huge swaths of land to intensive monocrop agriculture makes it extremely vulnerable to topsoil loss from heavy rains. In the past 15 years, the Midwest has been subjected to two “100 year storms,” and both involved catastrophic flooding and topsoil loss.

Yet those hardly count as natural disasters, as a recent Washington Post article by Joel Achenbach makes clear. Rather, devastation from the floods stemmed from egregious land-use decisions, Achenbach found. Achenbach relates an interview he conducted with agriculture expert Kamyar Enshayan of the University of Northern Iowa:

[Enshayan] points out that the heavy rains fell on a landscape radically reengineered by humans. Plowed fields have replaced tallgrass prairies. Fields have been meticulously drained with underground pipes. Streams and creeks have been straightened. Most of the wetlands are gone. Flood plains have been filled and developed. “We’ve done numerous things to the landscape that took away these water-absorbing functions,” he said. “Agriculture must respect the limits of nature.” 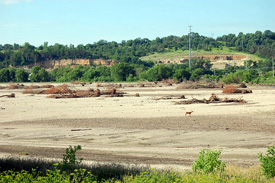 Of course, the pressures detailed by Enshayan have only intensified in recent years, spurred on by the government-dictated ethanol boom. To meet this year’s biofuel mandate under the 2007 Energy Act, at least a third of this year’s corn crop will be diverted into ethanol factories — nearly double the level of just three years ago. That spike in demand has caused corn price to triple in just three years, inspiring a mad rush to plant as much corn as possible.

In the 1970s, another sudden jump in grain prices — this one caused by a massive government-engineered grain sale to the Soviet Union — created a similar gold rush for industrial agriculture. The results of that short-lived boom bear heeding. From the veteran Washington Post reporter Dan Morgan in his 1979 book Merchants of Grain:

The land itself exhibited the scars of … the grain economy. Along the North Carolina coast, Italian and Japanese investors bought tens of thousands of acres of marshy wetlands, cleared the trees with bulldozers and Caterpillar tractors, installed drainage ditches, and announced plans for “superfarms.” The incentives were corn at $3.00 a bushel and soybeans at $6.50; the world needed more food. But environmentalists in the state expressed concern about the effect of the runoff of chemical fertilizers, pesticides, and herbicides on the fish and wildlife in the coastal waterways. Investors also purchased marginal farmland in the western edge of the corn belt in Nebraska and ordered fragile grasslands to the plow. Groves of trees, planted under federal programs in the 1930s to prevent soil erosion, were bulldozed so that spindly irrigation systems that wheeled around a central well in 160-acre circles could move unhindered. The land irrigated by these watering systems was plowed, diked, and planted to corn. After the corn was harvested, the thin layer of topsoil blew away in many places, leaving gashes of dunelike sand in the fields of Nebraska.