Eating from the Slow Food Ark of Taste: Tepary Beans 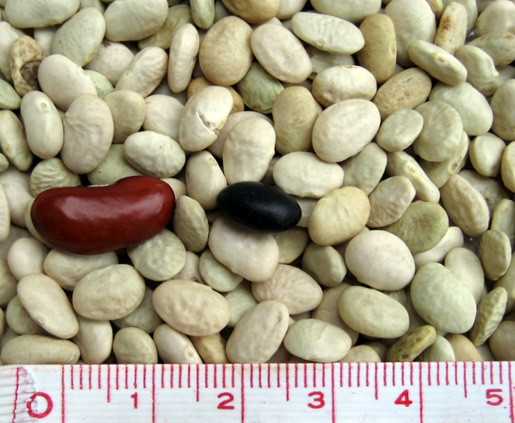 During a recent visit to the San Francisco Ferry Plaza Farmers Market, a bag of tepary beans at the Rancho Gordo stand called out to me as I struggled to make a few choices from their incredible variety of offerings. I knew that they were an ancient bean associated with Native Americans and so I bought a pound. The variety I purchased are small and pale green in color. The photo shows them along with a kidney bean and black bean for scale.

Tepary beans (Phaseolus acutifolius) have a fascinating history and an intriguing future. Ken Albala’s “Beans: A History,” devotes a chapter to the bean, and is the source of most of the information in this post. (An interview with Albala from Salon can be found at Tracie McMillan’s web site.)

The name tepary apparently comes from the language of the Tohono O’odham tribe, one of the tribes that has inhabited the deserts of modern-day Arizona and New Mexico for centuries. One story goes that the Spanish asked about the plant and received the answer “T pawi” — “it’s a bean.”

An Ancient Plant
The beans go back so far in human history that their precise origins are unclear. The general theory is that they were first domesticated in Central American several thousand years ago; five-thousand year old remains have been found in archelogical digs in Puebla, Mexico. They eventually made their way to modern-day Arizona and New Mexico, providing much of the protein and other critical nutrients for the great civilizations that flourished in the deserts (Albala writes that the beans provided 49% of the protein in the diet of the Tohono O’odham tribe during the days of Spanish domination, as well as calcium and niacin).

Tepary beans are desert plants — they have evolved and been bred to withstand the parched earth and blistering sun of the desert. After they are given a bit of water to become established, they can thrive in conditions that would decimate most other crops. At one time, scores of varieties were grown — Albala writes that 46 colors were grown in the early 20th century (California has a long history of growing the beans). But for one reason or another, the bean fell out of favor and today the bean is so rarely cultivated that it has a place in the Slow Food USA Ark of Taste (a collection of foods that are in danger of disappearing).

Ancient Foods as a Solution to Modern Problems
There’s a theory among scientists that the Native Americans of the desert have something called a “thrifty gene” that enabled people to efficiently convert food to body mass during the rare times of plenty. When people with this gene met 20th century foods like government surplus lard, white flour, and cheap sugar, a public health disaster unfolded: shockingly high rates of diabetes and obesity on the reservations of southern Arizona. Scientists are studying the current population of Native Americans, looking at their genetics to try to understand why they are so susceptible to diabetes and obesity. Others are looking backward at the foods that tribes ate in the centuries before Europeans arrived. These foods, which include tepary beans, various parts of the mesquite tree, cholla cactus buds, and other desert plants contain high levels of soluble fiber that cause there sugars to be released slowly during digestion in addition to providing a feeling of fullness. The subjects of diabetes, obesity and desert foods were examined on an episode of Alan Alda’s long running, but now departed, Scientific American Frontiers (which features Gary Nabhan, co-editor of “Renewing America’s Food Traditions”) and a recent episode of 60 Minutes II. More information about the Tohono O’odham tribe can be found at the Tohono O’odham Community Action (TOCA) website.

My Experience with Tepary Beans
I cooked some of the beans last Sunday, adding few extra ingredients so I could fully appreciate their flavor. My approach was simple: saute some diced onion in vegetable oil until it is soft, add water and the beans (which were presoaked in water overnight). I brought the mixture to a boil, and then simmered it gently for a few hours, partly covered. Near the end of cooking (which took a few hours even though the beans are small), I added some salt and a few teaspoons of ground New Mexico chilies. To serve, I topped the beans with diced raw tomato and skillet-seared sweet corn (slice sweet corn from the cob, then saute it over high heat in a little bit of vegetable oil until it is tender and some of the kernels had browned slightly). My simple bean stew was tasty, if a bit austere. The flavor of tepary beans is distinctive: nutty, sweet and not very “beany” at all. Bringing these ancient beans into my kitchen added some new flavors to my cooking repertoire, while helping me appreciate the importance of preserving culinary diversity.