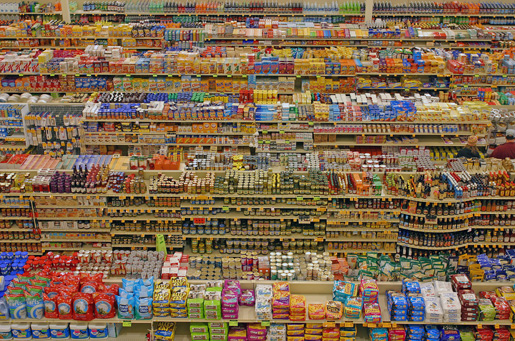 Raj Patel is the author of the book, Stuffed and Starved: The Hidden Battle for the World Food System. He will be speaking on August 29th at Slow Food Nation’s Food for Thought. You can read more about his work on his website.

This is Part 2 of this interview. The first portion can be found here.

Paula: How did the advent of the supermarkets change the way people think about food?

Raj: It was a slow process. The reason supermarkets emerged was because in 1917 you were in a situation, much like the one we have today, where there were sudden food price rises, and retailers were looking for a way to shift food cheaply, and to reduce the price of selling food so they could pass those savings onto the consumer and get more of the market. The way that was most successful was precisely through the supermarket, a way of presenting food and goods to people without having an intermediary.

Paula: So this supermarket idea is what made cheap food the standard?

Raj: I think the idea of the supermarket was to bring Fordism to food production. And what that means is that if you standardize everything about a way a place looks, functions and the way that the components pass through it and in that process food becomes another component that gets trucked through a warehouse and processed. The fact is that most tomatoes are now picked green, because they can stand the rigor of the transportation when they are unripe, and then they’re ripened with ethylene gas. That’s a really unnatural way of eating. And it’s precisely that taste of the sort of watery supermarket tomato that makes us remember fondly the homegrown version. That process of the power of supermarkets shaping the food we then get to select from is a fine example of how this sort of modern life that is geared around convenience is geared around fast food, which has its origins in industrial capitalism and the application of industrial capitalism for food is destroying the quality of our food and is harming us.

Paula: And you say its paradoxically eliminating our ability to choose.

Raj: Well that’s it because we are taught that if you go to the supermarket, and you have hundreds of varieties of cereal or coffee for example, selecting between them is free choice. But it’s not. All it is offering is a broader palate of constrained choices, and thus a constrained outcome. The word choice is what we apply to that afterwards, but in fact we are being denatured [and] we are being made to forget that there are broader choices, that there are sort of strange local fruits and vegetables that require a little bit of hunting down and a little bit of familiarity with food and with cooking, but which are fresher, better for you, and cheaper. But those choices are not on offer in the supermarket because they are not profitable.

Paula: Does that mean that you don’t think that supermarkets could work as part of a sustainable food system?

Raj: Supermarkets work because they fit into a life that demands fast food, food that is convenient, and that is pre-cooked. The produce section in the supermarket is one of the least profitable; supermarkets are kind of in the business of making us buy other stuff. That’s why the milk section is always in the back, even in Whole Foods. That’s the very telling illustration of the fact that supermarkets are not in the business of being friendly. They’re in the business of shifting products. The kinds of social relations that are involved in a supermarket are not the kinds you need for a sustainable system, and by that I mean knowing your producer. If you look at the Slow Food founding documents, they are a declaration of independence from the fast-paced world of capitalism in which food is just another thing that you need to get through the day rather than a moment of sensuousness and pleasure. And the founding ideas behind Slow Food look fairly anti-capitalist, and I think perhaps that’s not a bad idea, because the reason we need supermarkets is because we are working so hard for such little money and for such little joy. We need to reorganize our social system in order that everyone can eat properly. Supermarkets become superfluous in that more sustainable system, because actually we do have time to engage with our food more, and we do have time to go to the farmer’s markets, and we do have income to do that.

Paula: You suggest that, “poor diets are a symptom of systematic lack of control over our spaces and our lives.” What do you mean?

Raj: Certainly in the U.S. and the UK and in Spain you have a situation where working class people are more likely to be overweight. Now that translates into a lot of scorn, particularly in the Unites States, being heaped onto people of color for being fat. I think that sort of prejudice masks the fact that for working Americans, [there is] very little choice about how to eat. Just as an experiment, I went around the East Bay looking for ways to spend a week’s worth of food stamps, about $21 per person, and the only way to make the food stamps stretch as far as they could was by buying crap. I then went to the farmer’s market in the Ferry Building here, and tried to see what I could get for $21. I got a loaf of bread, some cheese, half a dozen eggs and a few tomatoes. There’s no way you can live on that for a week. Too often poverty gets written out of the equation when we think of both obesity and hunger. But the reason people go hungry today is not because there’s not enough food, it’s because people are poor. And the reason that we have obesity is because the choices that are available to many working people are very poor food choices. And that means that those low cost foods have a very high cost in the long term. At the end of the day poverty means that you are unable to control your environment the way rich people can.

Paula: Are there ways that we can start to change how people feed themselves, the choices they have?

Raj: I think that we need some deeper political change around redistribution. There was a time where you could say redistribution and not be howled at as a communist. I think its important to reclaim the idea that redistribution is an integral part of a healthy food system. Because you can’t have such a food system when people can’t afford the food.

Paula: Specifically when you say redistribution what do you mean?

Raj: Redistribution is not just about cash in pocket, but creating other kinds of freedoms to be able to access food. Increasing social programs, reducing the tax burden on poor people, increasing it on rich people, and investing in broad social programs like healthcare. One of the reasons Americans are working so hard is that they need healthcare, and everywhere else in the civilized world kind of takes it for granted, and that’s why a healthcare system would reduce the need for things like supermarkets because people would be working less. Food is medicine. The Hippocratic idea, that food is a way of keeping our bodies healthy and at the moment we are poisoning ourselves, which is why life expectancy is declining in the United States for the poorest people, particularly women. The reason that governments in Europe are taking the obesity epidemic far more seriously than in the United States is because in Europe when the population becomes obese, it’s the government healthcare system that has to pick up the tab. And that’s why [the European] governments are very into preventative measures, which in the United States would be seen as unconstitutional. Things like banning advertising food to children would be seen here as an infringement on companies rights of free speech, where as in the UK the government has no problem with that. They say if we don’t do this, half of British kids will be obese by 2050 and we will have to pay the cost, so you don’t get to advertise near our schools.

Paula: You’ve said that we are not going to change the situation by shopping.

Raj: Don’t get me wrong, I buy fair trade if there is an option. Because do you want hostile trade? I don’t want that, no one wants that. But it is a very American delusion to think that we can together change the world by shopping. Here we are kind of encouraged to think that way because we’ve been so denatured as people that the only way we can think of ourselves is as consumers. But we’re not consumers, we are human beings. And being a human being is a much richer, and more engaged and fulfilling idea of what and who we are than merely people who shop. And I think part of the transformation is realizing that we are richer and bigger, and more beautiful and fantastic and more able to change our world than our supermarkets would like to make us believe. We can change it through engaging with other people, we can change it by growing our own food and sharing that food, there’s a range of things that we can do, but there’s so much that we can be doing that isn’t about shopping and that you can’t get off the shelf. And I think that’s all for the good.