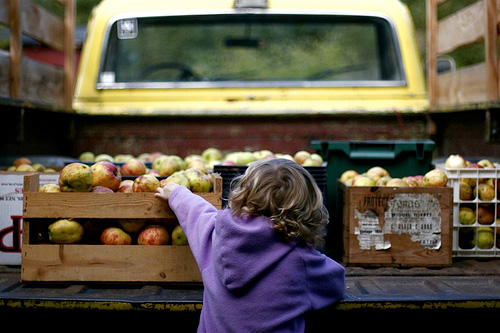 Rio Thomas is leading a small squad of volunteers through the damp, early morning fields of Alm Hill Farm at the outskirts of Bellingham, Washington. Their voices hushed by the gray sky overhead and limbs still stiff from sleep, this silent band treads carefully across rows of lettuce and strawberry beds before reaching their target – precisely lined-out rows of snap and snow peas with pods dangling loose and sassy like earrings from a gypsy’s ears. Thomas issues instructions to pick only the ripe pods, leave the young ones, and fill their harvest buckets at will.

Are they a band of hungry hobos bent on relieving their stomach pangs? A detail of soldiers foraging food for a nearby encampment? No. These stealthy scavengers are gleaners from a tiny non-profit organization known as Small Potatoes which, with the permission of the farmer, are harvesting crisp, organically-grown, albeit surplus peas for low-income residents of Whatcom County. Their mission is to harvest as much high quality produce as the farm will permit and then deliver it within a few hours to one of the county’s 15 food pantries.

“Farmers hate to see their food go to waste,” said Thomas, a stout middle-aged woman whose skin is deeply tanned by constant field work. As someone who has devoted many years of her life to farming, and just as importantly, grew up “being limited resource” as she puts it, Thomas identifies with both the farmer’s concern for surplus and the low-income persons fear of scarcity. She has put her dual experience to work by cultivating the participation of a dozen Whatcom County farmers, all of whom are organic and gladly share their surplus with thousands of the county’s neediest families.

Thomas points out that part of what motivated her to start this venture was her previous work in a food bank. “I was discouraged by the quality of the produce I saw there,” she said, “and thought we could do better if we established direct relations with our local farmers.” It is this kind of concern that makes Small Potatoes uniquely effective in pursuing food justice. Besides Thomas’s passion and that of her 100-plus cadre of volunteers, their commitment to only gleaning and distributing organic food gives them a leg up on other gleaning projects.

The 50,000 U.S. emergency food sites that feed about 10 percent of the U.S. population every year are running out of food. Demand is growing and supplies are shrinking, partly due to the food industries’ financial constraints and improved operational efficiencies. Out of necessity and their desire to improve the nutritional quality of the food they distribute, food banks have sought out more fresh produce donations. But like any perishable food shipped hundreds or thousands of miles, food bank produce arrives at the warehouse looking a little worse for wear. And since industrial scale farms and regional distribution systems aren’t donating their best produce, low-income families can’t expect to receive much in the way of top-notch fruits and vegetables.

Fortunately that’s not the case in Bellingham, WA. With not much more than $30,000 in cash donations each year, Small Potatoes is making – at least in their better years – over 100,000 pounds of the area’s freshest apples, lettuce, berries, and much more available to the community’s neediest families. And it’s local and organic.