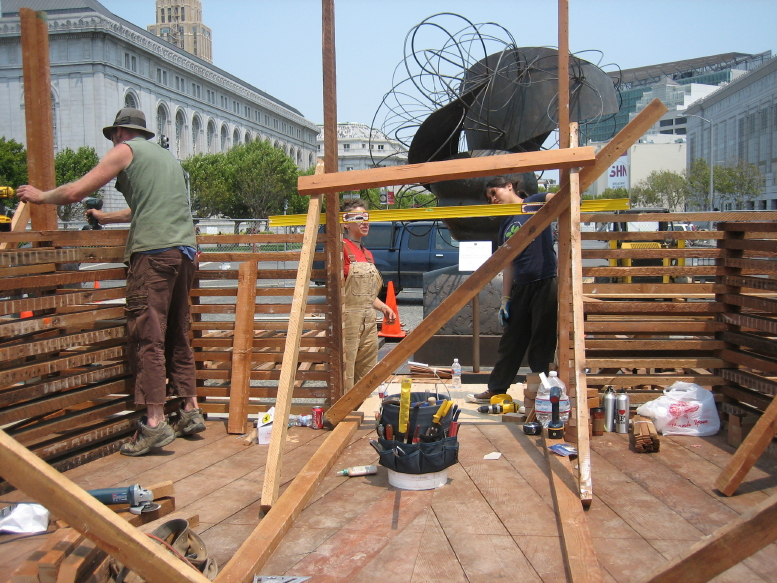 As the founder of City Slicker Farms, a non-profit urban agriculture organization in West Oakland, my mission in life has been to bring “slow food” to the least served. Ten years ago as an aspiring farmer it didn’t seem exciting to me to grow more beautiful specialty vegetables for rich people. I didn’t think it was fair that good food was limited to those who could pay farmer’s market prices. At City Slicker Farms we have developed ways to subsidize the price of the organic foods we grow so that we can offer sliding-scale prices and free organic backyard gardens to those who lack funds.

We have been blessed to be a co-creator, along with Garden For the Environment’s Victory Garden Program and Slow Food Nation, of the San Francisco Victory Garden being built as we speak in front of SF City Hall. Our role has been to grow all of the seedlings for the project and lend our gardening and community building expertise, developed over seven years of building productive urban farms and backyard gardens across the bay in Oakland. Our staff will be on hand in the next few months on Sundays and Mondays to show the garden, give advice and lead community groups.

Our impetus for getting involved in this exciting project was and continues to be our mission to bring slow food to everyone, not just the wealthy. In order to lessen our ecological footprint and provide food security for ourselves we have set a goal in our community of West Oakland of growing 40% of our fruits and vegetables right in the city. Although we’ve only reached a small percentage of our goal we know this is possible. It’s just a matter of developing the infrastructure for a productive urban agriculture system. We believe in beginning to build that infrastructure in the least-served communities, such as West Oakland, first. Otherwise, as usual, working-class folks are forgotten.

Our first urban farm was built on an empty lot in 2001 and we started putting produce out on a card-table later that year. A few short years later, City Slicker Farms now has a network of five Community Market Farms that supply over 8,500 pounds of urban-grown organic produce each year to our community. In 2005 in an effort to more deeply involve community members who were busy making ends meet, we began a Backyard Garden Program. Our motivating question was, if people lack food why aren’t they already growing their own? We found that although gardening is the number one American hobby, the expense of the materials is too great for working-class families. It just doesn’t make sense to spend a dollar to buy a cabbage seedling when you can buy a cabbage for a dollar in the store. The other factor was that the Baby Boomers and Gen Xers never learned the skills that Grandma and Grandpa knew.

Our Backyard Garden Program took off, and we were soon sadly turning away families from throughout the Bay Area—even San Francisco. City Slicker Farms sets each family up with a planter-box garden with all the seeds, seedlings, soil and information they need to grow their own food. We continue to provide all the necessary supplies and seedlings as well as mentoring visits from experienced gardeners to support them to be successful growers. They are then encouraged to recruit and mentor new families. We are really just bringing out the skills and abilities that are already there in the community and the results are astounding. In three years we have built over 80 backyard gardens and in 2007 participants grew over 10,000 pounds of produce. As we work towards an equitable food system on the regional, national, and global levels, the home-gardening solution can be easily implemented and sustained right now with resources we already have in our communities. We don’t need huge bureaucratic systems or vast sums of money, all we need is funding for a few program coordinators, a greenhouse, soil, and seeds, and people. 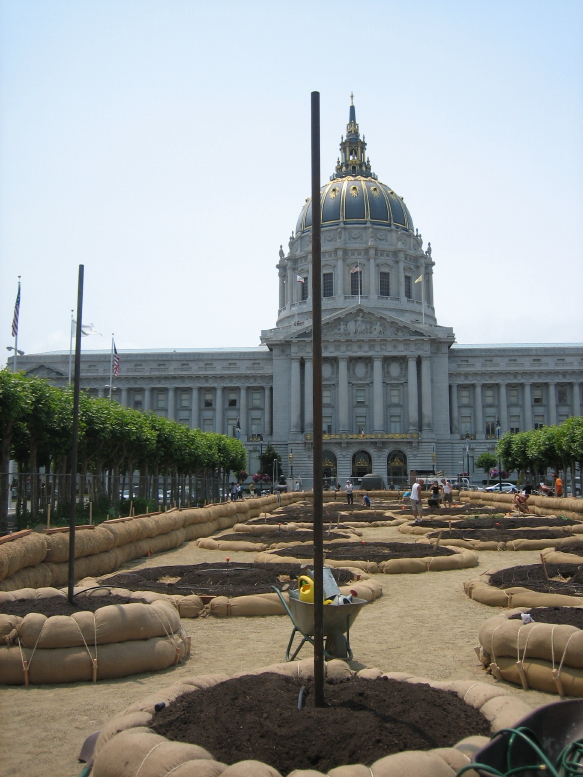 Collectively, we have the choice to build such an infrastructure now, rather than waiting until necessity requires it. The difference will be in the amount of suffering we experience when the price of petroleum and petrochemicals begins to be factored into the price of our food. As the price of fuel increases, the price of food goes up—we’re already seeing this. People living in poverty are already suffering from food insecurity, but at what point will middle-income families be impacted to the point of relying on emergency food sources? Supporting emergency food programs requires an ongoing subsidy, while stimulating urban agriculture programs creates self-sufficiency and stimulates local economic development and small-scale entrepreneurship. It’s up to us. At least on the city-government level we can make a difference by beginning to advocate for funds for urban agriculture development. The fact that San Francisco is supporting this beautiful and productive garden right in front of City Hall is proof that we can motivate at least our local elected officials to care.

Contrary to the popular belief that California is the bread-basket of the country, our state is actually a net-importer of food. Since most people live in urban centers, urban dwellers need to take some responsibility for their own food needs. Will we wait until people are suffering even more or will we begin the process of creating the necessary infrastructure for a sustainable urban food system now?

Throughout the Third World the UN Food and Agriculture Organization is spreading a system of support for home gardening and small-scale agricultural cooperatives in both urban and rural areas. These systems are implemented through national agriculture departments. In the U.S., since the Farm Bill and Department of Agriculture almost exclusively support large-scale rural agribusiness, real hope lies in municipal and county governments to provide the supports for urban agriculture.

So what are the possibilities in San Francisco? Because of our long growing season in the Bay Area, intensive urban agriculture can provide from one to three pounds of produce per square foot per year. Each person consumes approximately 300 pounds of fruits and vegetables per year. That means a space of 10’x10’ to 20’x20’ (100-300 square feet of growing space, not counting paths) would be needed to grow ALL of the fruits and vegetables for each person.

An average San Francisco backyard (25×40), if cultivated intensively could grow all of the fruits and vegetables for one person. A goal of growing 20% – 40% of the fruits and vegetables consumed in San Francisco could be achieved through a combination of backyard gardening, community gardening, school gardens and increasing urban agriculture on currently unused municipal land (if we assume each household has five members that means the backyard could grow 20% of the household food needs; since not all households will grow food, add to that other urban farming lands)

Current City resources could easily be redirected to support such an effort and are an extremely cost effective way of improving the sustainability of our food system and eliminating food insecurity. What’s necessary is to collectivize certain aspects of food production such as materials sourcing and plant propagation. Compost can be made through municipal programs, mulch from tree care can be used for pathways. Centrally located greenhouses can also serve as pickup locations for plants, compost and mulch. Current university and non-profit resources can be developed to provide urban agriculture technical assistance advisors for home producers, urban gardens and entrepreneurial gardens.

So, what are we waiting for? I encourage everyone in San Francisco to build on the success of the Victory Garden and work with the City to ensure that community resources are allocated to this simple solution. City Slicker Farms will continue to advise the GFE Victory Garden Program so that by sharing our experiences and learning we can contribute to it’s success. We hope to spread the backyard gardening system we have developed to other communities as well and encourage you to get started in your community.

We need ongoing support to continue our work of bringing organic urban-grown produce to low income Oaklanders. If you would like to send contributions to support our work, please send them to:
City Slicker Farms
1724 Mandela Parkway, Suite 5
Oakland, CA 94607
510-763-4241
cityslickerfarms.org